Old And Fake News In The Place Of New 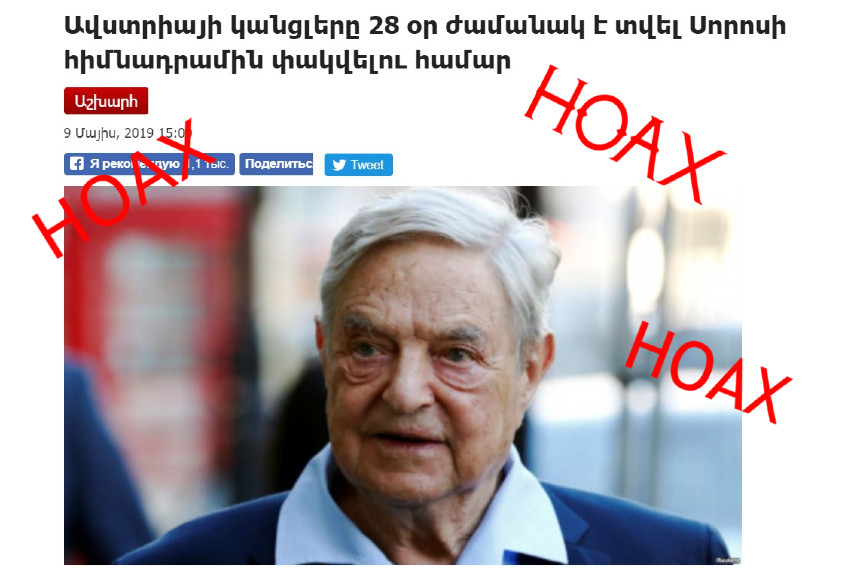 The news which was spread on May 9 that “the Austrian Chancellor gave Soros’ foundation 28 days to close,” turns out to be fake news.

The news was spread with the same content within one minute of each other on asekose.am and lurer.com and a bit later on the websites newspress.am, theworldnews.net, alternativ.am, haydzayn.com.

One day later, on May 10, in the Armenian media domain, panorama.am reported on the fraudulence of the news, citing the American politifact.com. The platform denied the news about the closure of the Open Society Foundation in Austria in an article published in 2017. Moreover, it turns out that the foundation did not even have an office in that country at that time.

The website also writes that in the article from the source of the fake news, Yournewswire.com, Chancellor Kurz’ opinion of George Soros actually belonged to a writer, journalist  Matt Taibbi, who in 2010, in an article called “The Great American Bubble Machine” for rollingstone.com, describes American investment bank Goldman Sachs as “a vampire squid wrapped around the face of humanity, relentlessly jamming its blood funnel into anything that smells like money.”

In all of the above-mentioned articles in the Armenian media, the source for the news and commentary of Sebastian Kurz is noted as the same, Yournewswire.com, where you will not find the news, it was written 2 years ago and has been removed.

Yournewswire.com, now presenting itself as newspunch.com, turns out is not that reliable as a source. The website has appeared on the cbsnews.com list of sites which spread false information and in 2018 poynter.org wrote that this is one of the most famous platforms in the world that spreads false news and conspiracy theories.

The news of the closure of the Open Society Foundations in Austria on Armenian news websites have been circulated in 2018, and that was debunked by politica.am and fip.am. However this did not prevent the new reprint from circulating today as something new, and an article published by analitik.am a year ago was posted by Facebook user Narek Malyan on May 10 as news and truth.