What News Circulated And Was Refuted Between April 1-15 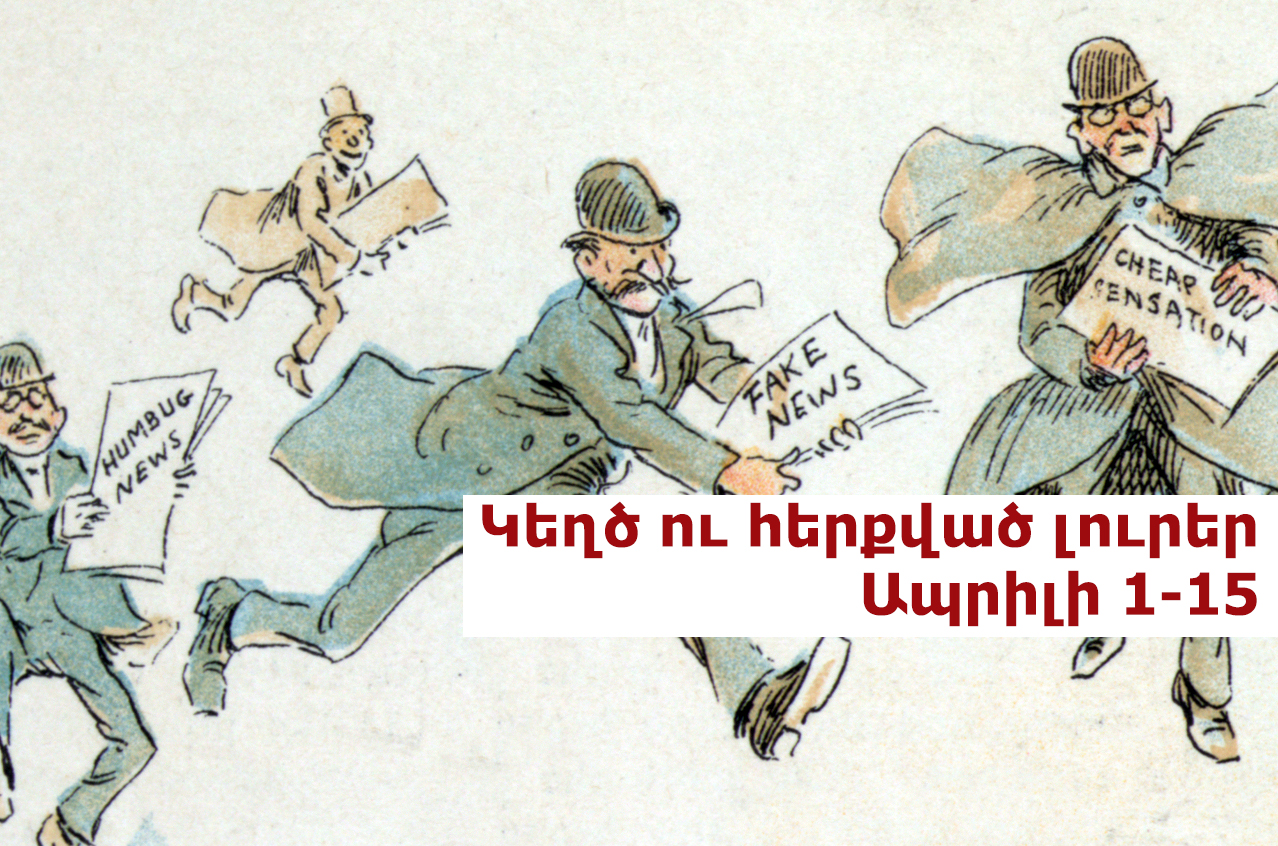 In early April, LGBT and Karabakh conflict topics were launched once again in the Armenian media field.

In response to one of the questions that followed the PACE speech, Nikol Pashinyan announced that he did not know why the holding of the LGBT Christians Forum in Armenia was canceled. “ I cannot say the reasons, as to why it was canceled or when that event was planned. I am aware of the issue within the range of 1-2 posts on social networks and cannot answer in detail,” quoted from PanArmenian.net.

The Forum of Eastern European and Central Asian LGBT Christians was meant to be held on November 15-18. For the purpose of the security of participants, the organizers had to cancel the forum.

During those days, Nikol Pashinyan touched upon the issue separately from the NA, in response to PAP MP Gevorg  Petrosyan’s statement and specifically stated that he had instructed to clarify what that event was about, who the organizers were and what its purpose is.

Saying that apart from 1-2 posts on Facebook he had no information, the Prime Minister is presented as a part of reality.

A statement of accusation against Russia

On April 10, 7or.am, referring to reports of the press, revealed that MP and member of the “My Step” faction, Andranik Kocharyan, chairman of the National Assembly’s Standing Committee on Defence and Security, stated that the terrorist attack on October 27, 1999, was organized by Russian special services under the directive of Vladimir Putin.

The material was republished on a number of other sites. The information was denied by Andranik Kochyaryan, describing it as a “lie” and “absurd.”

Endless speculations on the LGBT topic

On April 5, a transgender woman’s speech from the NA podium was followed by a series of fake news. For example, it was announced that a gay pride parade will be held in Armenia in the summer.

Mamikon Hovsepyan, Executive Director of Pink NGO for the Protection of LGBT Persons told Media.am that the information is a “lie,” noting that such provocative statements are made regularly.

The mushroom site HYNEWS2 also made 20 fake or semi-true publications, for example, there was an assertion that in Yerevan, “a boy who was dressed as a girl was brutally beaten in the middle of the street.” This information did not correspond with reality.

Hakobyan and Alyeva were not together on the plane

On April 1, a Facebook user named Vahagn Aghabekyan posted that the first ladies of Armenia and Azerbaijan, Anna Hakobyan and Mehriban Aliyeva, “were flying for 9.5 hours seated next to each other” on a flight from Paris to New York.

This information was denied by Anna Hakobyan’s spokesperson, noting that Hakobyan did not travel from Paris to the USA.

On April 9, during a visit to the Noragavit customs house, Nikol Pashinyan was angry when seeing the flag on the ground. “Anyone who has worked in this room, no one will work,” said Pashinyan. Addressing the customs officer, he added “[…] you will send in your resignation papers.”

Responding to questions about the incident, the head of the SRC, David Ananyan, said that the Prime Minister had not fired the employee, rather “called-urged” the employee to leave, and the employee could have chosen not to follow that encouragement.

However, Pashinyan did not consider his sharp response as being a call. In a Facebook post he noted, “If I need to fire thousands of people from their jobs, I will fire them,” in fact, qualifying the action as a dismissal.

Fip.am has studied the Armenian legislation and found that the dismissal of customs employees is beyond the scope of Pashinyan’s authority and in taking this step, he violates the law.

False “accusation” after a publication regarding the anti-vaccine information campaign

After publishing the article Facebook Groups Of Mothers Are Targeted In The Heated Fight Against Vaccines, Marina Khachatryan, one of the active participants of the group, made a post on Facebook.

“…the sight has received money from the Soros Foundation many times, and in 2018 it received about $42,000. Therefore, it is Sorosian and carries out Soros’ orders,” wrote the Facebook user.

Executive Director of the Media Initiatives Center, Nune Sargsyan, explained under the same post that the last time the MIC received funding from the Open Society Foundation-Armenia was in 2008, not in 2018. “After that, the website, that is, the organization did not cooperate with the fund. But this is not so important in this case. The term “Sorosian” used in your post does not contain any negative connotations for us. The financial sources of the site are mentioned on media.am and are open and are always transparent, our activities as well,” wrote Sargsyan.