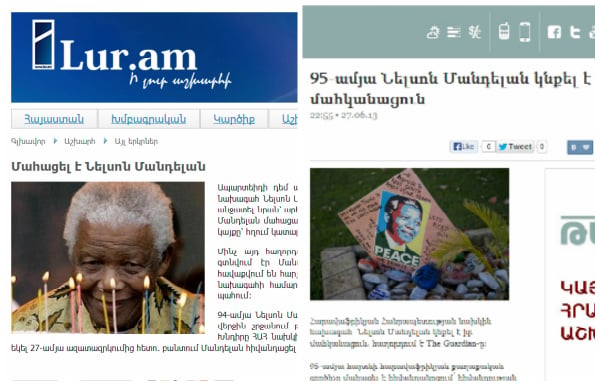 Nelson Mandela’s “death” became the phantom of the Internet yesterday. No one has any actual facts, but they are all “killing” him.

At 10:55 pm on Jun. 27, Tert.am conveys the news of Mandela’s death, citing The Guardian as the source of the news. I go to The Guardian‘s official website and I see that there has been some improvement in the former President of South Africa’s health condition.

CNN likewise writes nothing about what happened with Mandela. To be more precise, it writes that South African President Zuma said Mandela’s condition improved and that his situation “remains critical but is now stable.”

From the Russian sites, RIA Novosti doesn’t even write about that: on the night of  Jun. 27, one of the most authoritative Russian news sites has no — absolutely no — news about Mandela.

Meanwhile, leading Russian news sites have quoted Mandela’s daughter as saying that her father might die at any moment.

While The Guardian‘s official website continues to report improvements in Mandela’s health, Tert.am removes the news about Mandela’s death from its pages.

At that time, 10:55 pm, when the website had published news of the Nobel laureate’s death, the news was replaced with another news story: “Tevez: I told Pellegrini that I want to go away“. It sounds like a verdict for suicide — “I want to go away” sounding like “I want to die” [the same phrase for both is used in Armenian]. But for us, the topic is about someone’s death, which is not a fact. 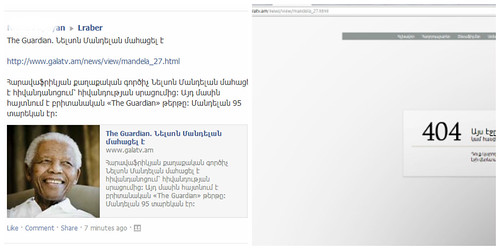 GalaTV.am also takes the bait of Mandela’s death. It rushed to spread the news on Facebook — also citing The Guardian as the source. It’s clear as day that no one has seen the news with his or her own eyes. Because a short while later GalaTV.am also removes the news about Mandela’s death from its website.

While Tert.am and GalaTV.am are editing out that which didn’t happen, iLur.am reports about the death of the anti-apartheid icon, citing The Guardian Express (which has nothing to do with The Guardian; they are different news outlets). iLur.am found this news on the Russian site Utro.ru, which, indeed, informs readers that Mandela’s relatives have agreed to pull the plug on the 94-year-old politician’s life support machine. Now it’s clear what “The Guardian” we’re talking about — it’s The Guardian Express, which some time after reporting Mandela’s death is “disconnected” from the Internet (the site was not functioning normally). 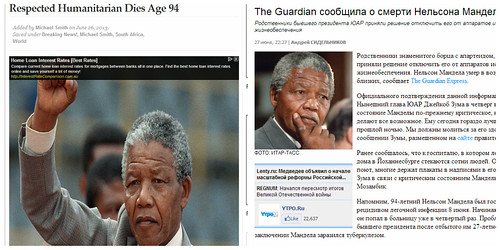 During that time, The Guardian Express‘s top news is reflected neither in the Nelson Mandela entry on the English-language Wikipedia website nor by The Times, which two hours after Mandela’s “death” features on its front page only one Mandela-related news story: Obama saying Mandela’s legacy will endure through the ages. It’s clear that he’s talking about someone who is on his way out but who is not gone.

None of the Armenian news outlets noticed that this website edited the headline of its day-old news story. The news was originally published on Jun. 26. Utro.ru, meanwhile, without noticing this detail, takes the story and republishes it a day later — which is then picked up by the other news sites in Armenia that find out through Utro.ru about that which didn’t happen.

The Guardian Express‘s readers, in comments about Mandela’s life and death left beneath the article, write: “The Guardian Express – maybe a bit too express?” and “It seems you have highly incredible sources or you’re highly irresponsible” for disseminating such news.

It’s no surprise then that Mandela’s daughter Makaziwe has called journalists “vultures,” who are “waiting when the lion has devoured the buffalo, waiting there for the last of the carcass.”