According To Freedom House, Armenia Has Fallen Behind In The Field Of Free Media 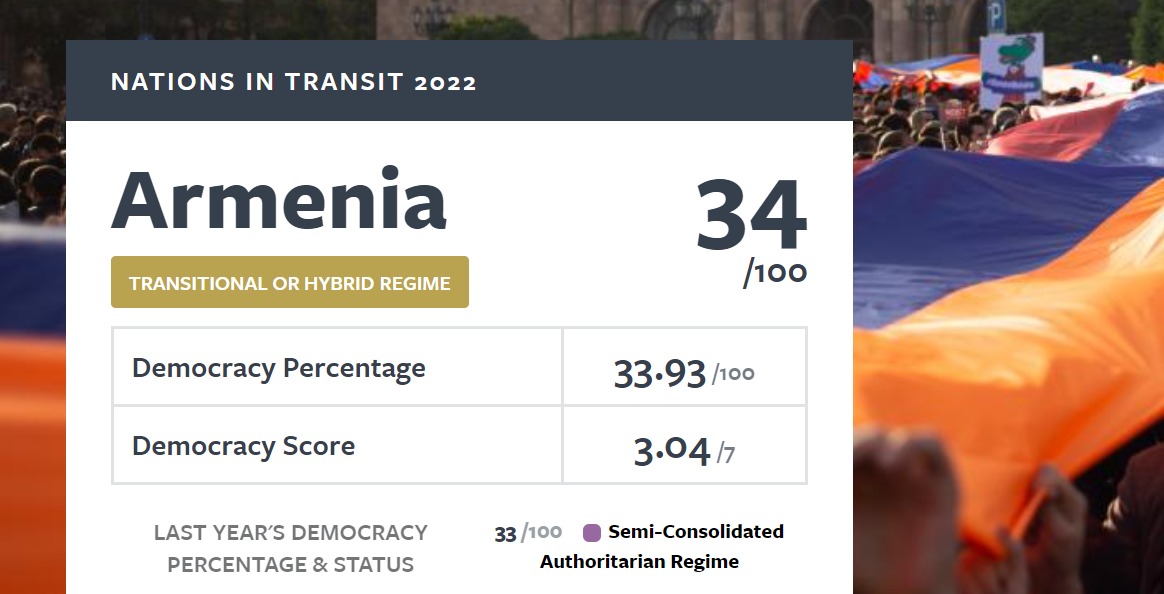 Freedom House, an international human rights organization, has published its annual report, Nations in Transit 2022, which also assesses the situation in Armenia in 2021.

According to the report, Armenia has transitioned from authoritarian to hybrid governance, but “still does not meet democratic standards.”

Armenia made overall progress with a maximum of 7 points (which corresponds to the index of a democratic state), receiving 3.04 points. Last year it had 2.96 points.

The report says that “the new government has promised to address long-standing issues such as systemic corruption, non-transparent policies, a flawed electoral system and weak rule of law.”

Armenia lags behind Ukraine, Georgia, and Moldova among the post-Soviet countries. Estonia has the best index; Turkmenistan has the worst.

The adoption of the new “Electoral Code” and the early parliamentary elections in 2021 became the basis for a positive change in Armenia’s index.

Some progress has also been made in the judicial sphere, and the authors of the report urge the authorities to continue the reforms. At the same time, Armenia has regressed in the field of press independence.

Is there free and independent media?

This question has been answered by the fact that independent and investigative media outlets are relatively free, and although they are small, they provide sound coverage, challenging state broadcasters and the official media.

“By comparison, most print or broadcast media outlets have political or wider commercial interests,” the report said.

Examples of restrictions on journalists’ freedoms include restrictions on the free movement of journalists in parliament and in some parts of the Syunik region. The 2021 rulings were condemned by local and international organizations, and local media outlets called on the government to end media impediments and harassment.

The law passed in July 2021, which criminalized insults and slander against officials and public figures, left a bad mark on the measure of media freedom. Freedom House gave warnings regarding the topic in March 2021, appealing to the Armenian authorities.

What is worrying is that this law can easily be abused by restricting the right to free speech, and the media can be subjected to direct political pressure if they criticize politicians.

The measure of freedom is also influenced by the self-censorship that, according to Freedom House, exists in the educational and academic system.

In 2021, parliament passed a resolution authorizing the government to appoint a majority of members of the boards of trustees of three leading state universities. And it allowed the authorities to influence important decisions of universities, including the election of rectors.

The report notes that private discussions are relatively free and heated. Although eavesdropping and electronic surveillance are not possible without a court order, the law criminalizing defamation of public figures is worrying (9 lawsuits are already pending). This does not allow us to talk about the full realization of the right of citizens to free expression.

As a positive step, it is mentioned that civil society groups in Armenia were able to prevent the ruling party’s bill, as a result of which the Human Rights Defender’s Office would have been under the control of the government.

The report refers to the Armenian-Azerbaijani war, the impact of which continues to be severe for Armenia. Thousands of people were killed and displaced as a result of the conflict. And in 2021, some territories in Armenia were continuously occupied by Azerbaijani forces, as a result of which the right of free and safe movement of Armenian citizens was hindered.