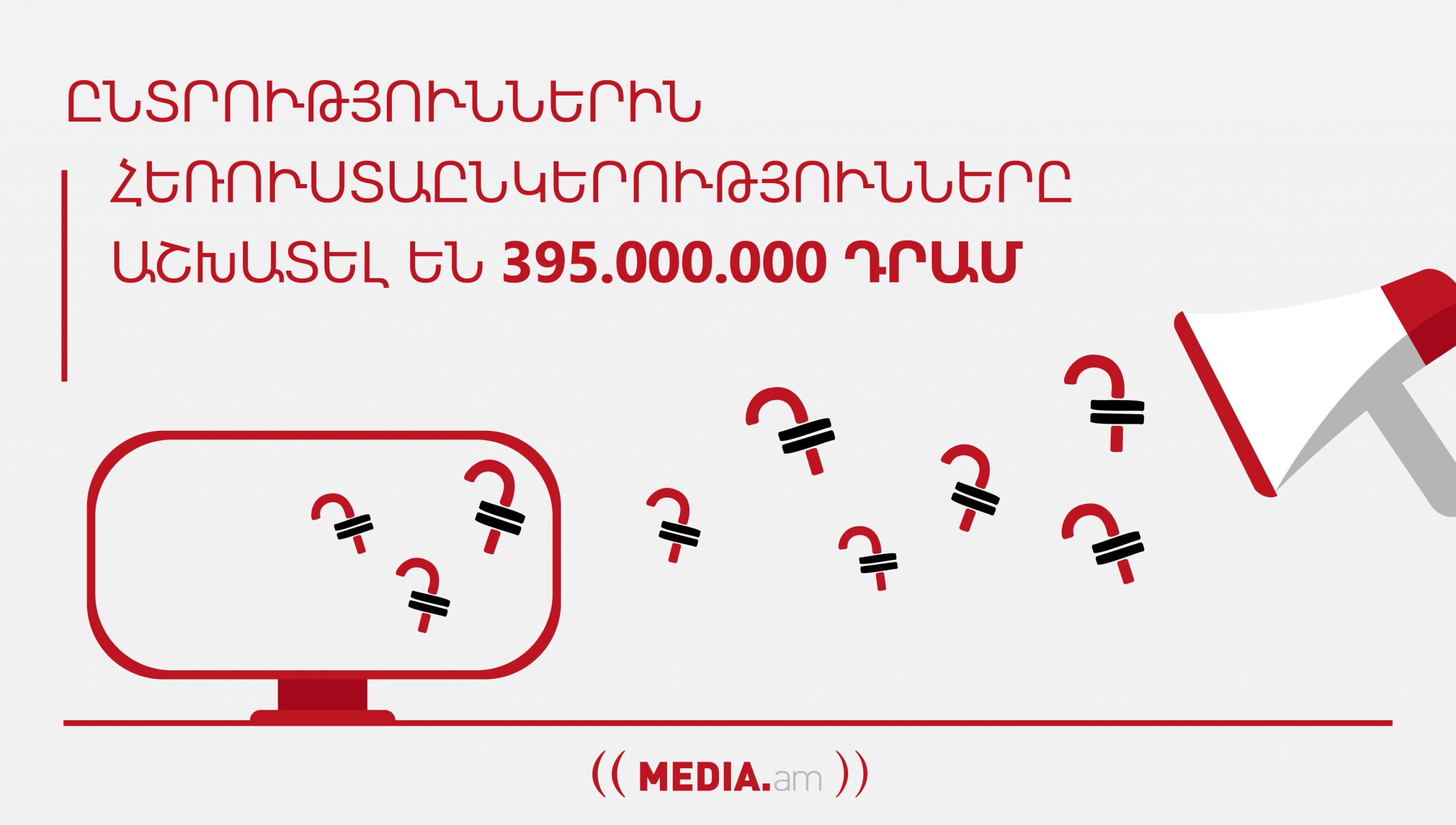 During the special elections to the National Assembly of 2021, the political forces paid about 395 million AMD for the TV broadcasts with national and capital broadcasting.

The “Armenian” Alliance bought the most airtime, but “Civil Contract” is the leader in terms of pre-election campaign expenses. The “I have honor” bloc is in third place.

The political forces, which have a big budget for the campaign, used all kinds of platforms to convey their message to the voters, from leaflets and billboards to specially written T-shirts and so on.

However, the lion’s share of the total expenses is on TV. Moreover, if the political forces that received a lot of votes worked with all the TV companies, then the financially limited forces preferred the regional TV companies.

According to the documents submitted to the Central Electoral Commission, in the pictures, you can see the political forces that have spent more and less, in order.

Party expenses for the election campaign

One of the forces participating in the elections, the European Party, did not spend any campaign money at all. The “Citizen’s Decision,” “Rise,” “Sovereign Armenia” and “Freedom” parties were passive in the issue of finances.

In several articles, we have already referred to the financial problems of the media as a result of the coronavirus and the recent Artsakh war. The TV companies received the hardest blow, for which this election became a good opportunity to attract money.

Their financial offer for airtime did not differ much from the offer of previous years. Armenia and Shant TV sold their airtime at the highest price, setting 100 thousand AMD per minute. And Public TV set a price below its market price of 45,000 AMD per minute in order to create an equal and competitive environment for political forces.

The TV expenses of the political forces participating in the elections help to understand which TV channels are preferred.

The largest amount, about 98 million AMD, was received by Shant TV, Armenia is the second with 95 million AMD, and ArmNews is in third place with 37 million AMD.

Public, Yerkir Media and A-TV TV companies earned almost the same amount – about 27.5 million AMD. Dar 21 TV, the entertainment channel, earned the least amount of money – about 4 million AMD, which is several times less than the income of some regional TV companies.

The most expensive contracts signed with Armenia and Shant TV companies belong to the “Armenia” Alliance, each with a value of 24 million AMD. This political force has signed contracts worth 5 and more million AMD with regional TV companies.

The Civil Contract Party has distributed its resources among almost all platforms, for example, it has signed a contract with ArmNews TV for about 2 million 800 thousand, and another 2 million 400 thousand AMD with the 5th channel.

The second Armenian TV channel, which did not receive a national broadcasting license, but airs on a cable network, managed to sell airtime for its campaign during the elections for about 11 million AMD.

The “I have honor” bloc has worked equally with the national, capital and regional TV companies and has allocated a rather large budget on almost all regional platforms.

The Prosperous Armenia Party was quite modest in this election with TV expenses. It signed the biggest financial agreement with Kentron TV, and worked relatively little with regional TV companies.

The Armenian National Congress has distributed the main amount of their campaign budget between Armenia and Shant TV channels. It also worked with Public TV from the national and capital TV channels. It did not use regional TV.

The general tendency is that the political forces with less money have worked more with the Public and regional TV companies. Moreover, there is a political force that has seen its future electorate in Lori region, and consequently has bought the airtime of local TV channels.

In the near future, we will also present separately the money and preferences earned by the regional TV companies during these elections.