Russian Peacekeepers Deny The Entry Of Foreign Journalists To Artsakh 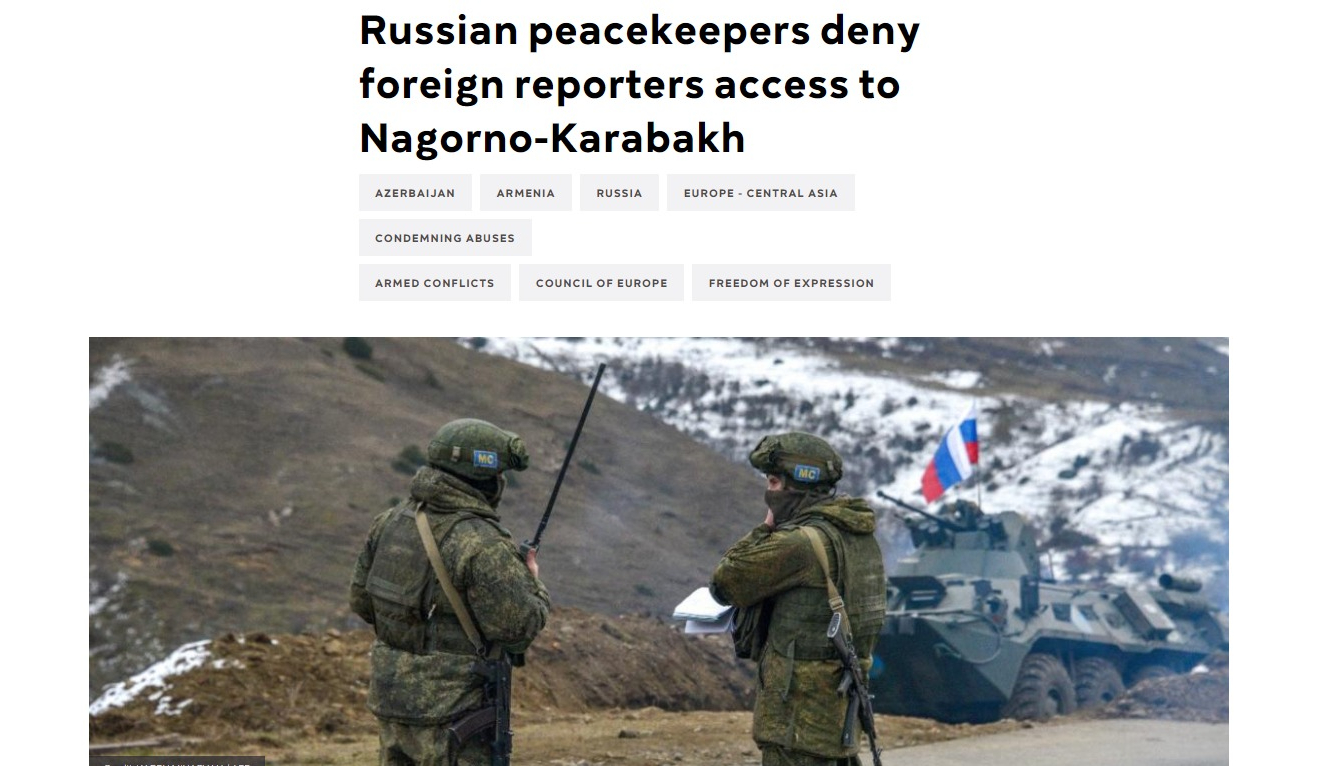 Reporters Without Borders (RSF) has called on Russia to stop denying international journalists access to Nagorno-Karabakh, which is controlled by Russian peacekeepers.

RSF also called on the UN and the Council of Europe to respect the right to freedom of information and to being informed.

“There is peace in Nagorno-Karabakh now, after six weeks of bloody war last autumn, and security is maintained by Russian peacekeepers, but control over journalistic activity has intensified,” the statement said.

RSF reports that since February of this year, at least 10 international journalists have not been allowed to enter Artsakh through the Lachin corridor.

One of those journalists is photographer Christophe Petit-Tesson, who said that the rules have changed since January and it has become more difficult to visit Nagorno Karabakh.

Vincent Prado, a journalist with the French M6 TV channel, said that without any explanation, he had been repeatedly rejected by Russian peacekeepers and had not been able to enter Nagorno Karabakh.

Canadian freelance journalist Neil Hauer and British journalist Mark Stratton, who also spoke about their disappointment in an interview with the BBC, also received such an unexpected rejection.

Although photographer Kiran Ridley was allowed to visit the area, on April 4 he was forced to return from a Russian checkpoint leading to Nagorno-Karabakh.

Journalists of France 24 news channel Jonathan Walsh and Mohamed Farhat were able to visit Nagorno-Karabakh in early March, but they succeeded only due to their local privileged contacts.

“Russian soldiers systematically deny the entry of more and more foreign journalists. There are no objective grounds for this obstruction. Journalists do not pose a threat to the security of the area guaranteed by peacekeepers,” said Jeanne Cavelier, RSF’s Eastern Europe and Central Asia Office.

The statement said that respect for freedom of information is important, especially in conflict and post-war situations.

Without international media, Nagorno Karabakh can become a “black hole” of news and information. “We urge the Russian authorities to allow journalists access, regardless of their nationality,” she said.

RSF also reminds that there is no special clause in the ceasefire agreement signed on November 9, which regulates the entry of journalists. Therefore, the accreditation of media representatives is provided by the unrecognized consulates of the Artsakh Republic or the Ministry of Foreign Affairs of the Republic of Armenia.

However, in fact, it turns out that the entry of foreign nationals is allowed or denied by the Russian peacekeepers, who notify the foreigners of their decision on the eve of the planned visit.

French-Armenian photojournalist Marc Sivazlian, who accompanied journalistic groups and spoke about such cases.

RSF emphasizes in its statement that the entry of journalists to Nagorno Karabakh is also restricted by Azerbaijan, which is headed by an authoritarian president. For example, the film crews of France 24 and the European TV channel ARTE were tightly controlled in Azerbaijan and did not have the opportunity to report freely.

At least 7 journalists were wounded in the Armenian-Azerbaijani war from September 27 to November 9 (you can get acquainted with the events here).

Reporters Without Borders also suggests paying attention to the future of journalists who received an injury or loss in the conflict zone.

Three Armenian journalists, Avetis Harutyunyan, Aram Grigoryan (of Armenia TV) and Sevak Vardumyan (24news.am), were wounded on October 1 during a rocket attack in the city of Martuni. On the same day, the local fixer was killed, whose brother, together with journalists, filed a lawsuit against Azerbaijan at the European Court of Human Rights in Strasbourg.

That court case started on March 26.

In summary, RSF publishes the World Press Freedom Index, which measures the position of 180 countries in the Press and Information Freedom Scale.