The CPFE Concludes That 2020 Was Not Good For The Media 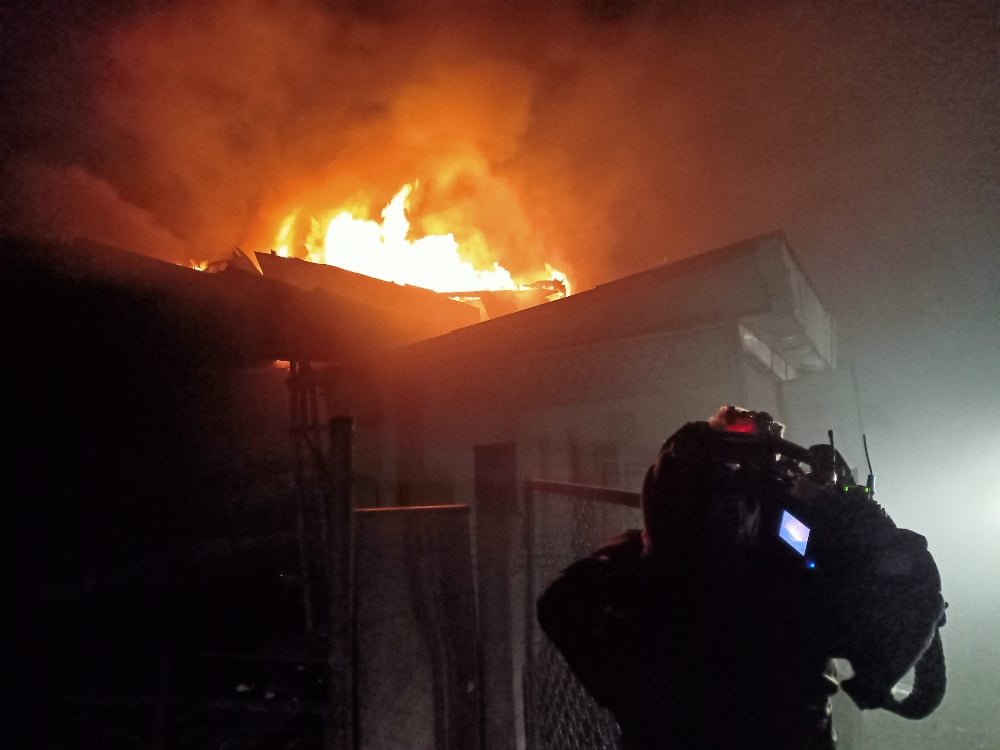 The Committee to Protect Freedom of Expression has published an annual report summarizing the year 2020 in terms of violations of freedom of speech, media and journalists’ rights.

The report says that last year was a tense and difficult period for the Armenian media and journalists. At the beginning of the year, in the framework of the fight against coronavirus, we witnessed “groundless restrictions” on freedom of speech (according to the CPFE formulation), and then there was the second Artsakh war, which brought difficulties in coverage.

The state of emergency and then the martial law forced only official information to be published in the media and social networks.

“Moreover, it was worrying that the implementation of these decisions was controlled by law enforcement agencies, which intervened harshly in the activities of the media, often with subjective and arbitrary approaches,” the CPFE stated.

The structure made that conclusion by studying the alerts received through its “hotline,” the conversations with experts and media workers, the materials of the court cases and the media publications.

Thus, it was reported that during the state of emergency caused by the coronavirus, there were 32 cases when the police demanded that the media and journalists remove their publications and posts (no fines were imposed, although they were intended).

The government later significantly softened the provisions on the activities of the media, then completely abolished them.

And the restrictions conditioned by the martial law were established according to the decision of the RA Government, then the penalties were tightened by legislative changes.

According to the CPFE, 13 media outlets were fined.

The police did not reveal their names, reasoning that this information is personal data, which is protected by law.

“In fact, by providing the list of fined media outlets, the police would not disclose any personal information and there was no need for it,” the CPFE said.

According to the CPFE, 273 cases of various pressures were registered during 2020. 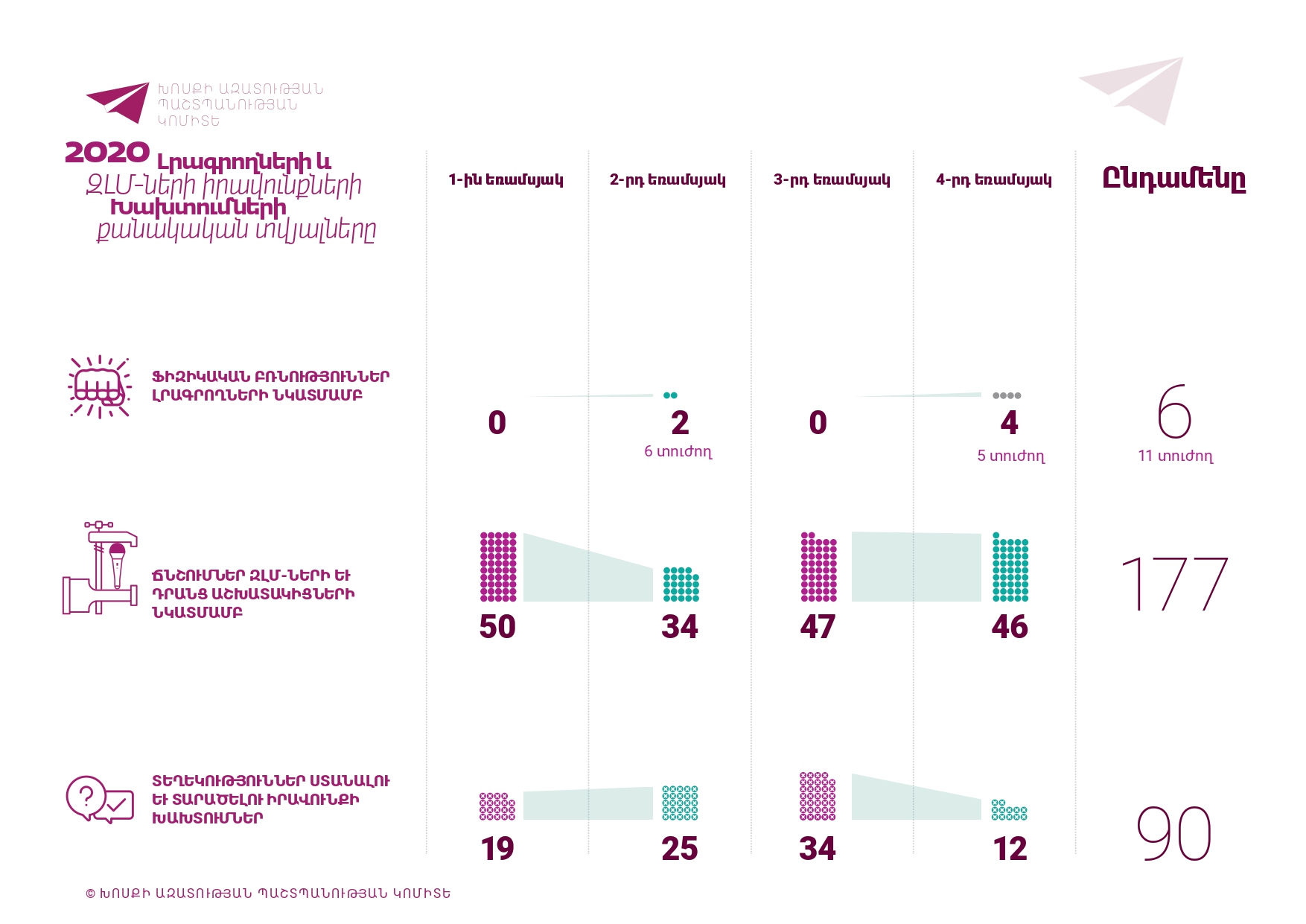 In addition, media representatives have been involved in new lawsuits (74 cases). Most of the cases were based on insults and slander, a smaller percentage – labor disputes. 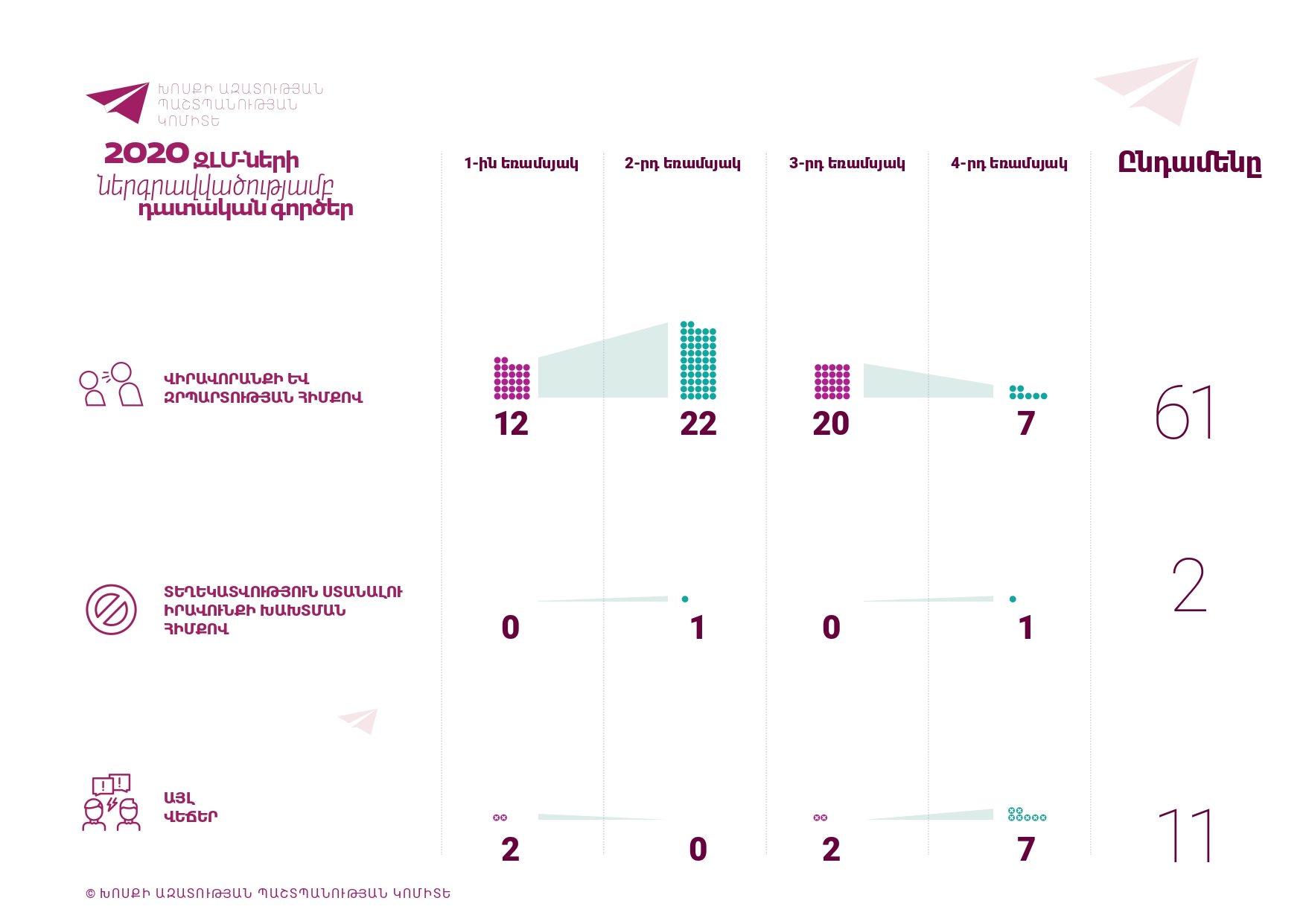 The CPFE reserves the view that cases of obstruction may not be complete, as “media representatives sometimes do not consider it necessary to disclose the facts of the obstruction of their professional activities, ignore various threats or prefer to solve problems on their own and overcome illegal restrictions.”

The CPFE also mentions that in 2020 the Armenian government and the National Assembly came up with various initiatives related to the media field, “which were not always acceptable to the journalistic community.”

According to the CPFE, although Armenia has maintained its position in the international ranking of press freedom according to the reports published in 2020, in terms of violations of the rights of journalists and the media, “the situation in the country is not good.”