The “First Channel,” Which Is Also Public, Was The Subject Of Discussion 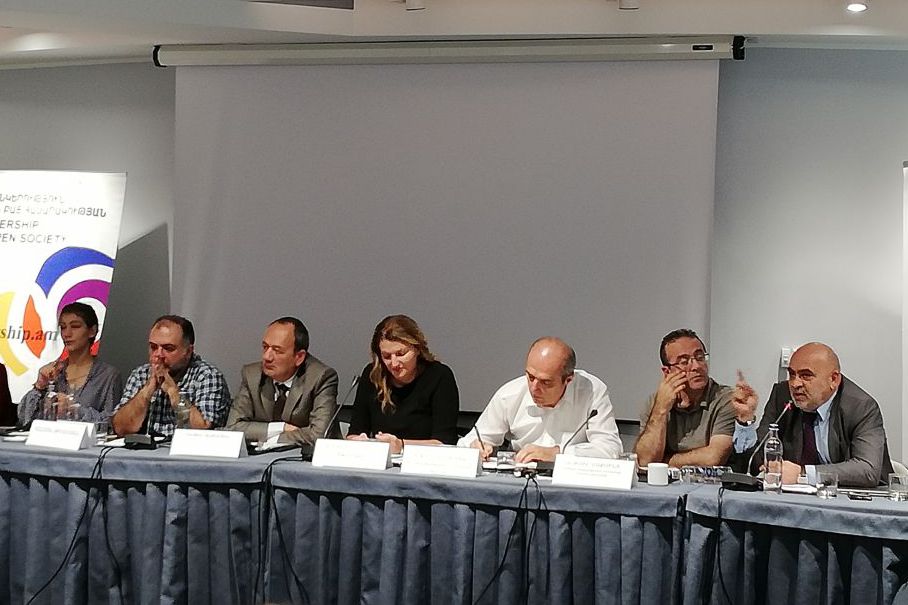 In Armenia, attempts are regularly made to reinterpret the role of Public Television, its work style, targets and messages.

As well as finding a formula that can measure the level of freedom of speech, human rights, proper and objective coverage, pursuit of educational and value guidelines and many other important points that have the force of law but which are  not broadcasted or reflected or which are reflected in a distorted manner.

And most importantly, over the years we have been trying to figure out how Public’s orders are generated and how it can reach how the public media organization manages to work on public funds.

On September 28, the discussion on “The Role Of Public Television In Creating A New Armenia” was initiated by a non-Public channel, and which once again passed over those fundamental points based on the wishes to modernize.

The difference was perhaps the time that all the participants were willing or unwilling to speak of the old and new views.

Human rights activist Artur Sakunts urged to leave the past in the past and move forward. “But we need to have the courage to say, we were not right and to genuinely apologize. This is the way to self-purification. The Council of Public Television with its current staff cannot continue to work without doing so,” he said.

And he urged them to be open and courageous, “to say without hesitation and defensiveness, that Public was not what it should have been.”

Member of the Council of Public Television, Stepan Zakaryan said that Public has always questioned whether any attention should be paid to ratings, “Public is obliged to prepare programs that other channels do not make, that is, not to chase after ratings. But we know that Robert Kocharyan had imposed that Public continues to have high ratings.”

Levon Barseghyan, President of the Asbarez journalistic club in Gyumri, contradicted this idea, “Adapting to the doctrine is a poor justification.”

He said, “There was a time when we wanted to have a good Public channel, but now it’s all the same to me as to what it does. We’ve become used to living without Public.”

According to him, Public has been a propagandist and misinformationist for many years, and before the disappearance of advertising, a money-laundering machine, where it was possible to see staged, showy interviews with officials and where “blacklists” were used with the names of unwanted people for going on air.

“Now my only concern is that the taxes paid by me will be used fairly for a good cause,” he said.

Levon Barseghyan also said that he appealed to the Council of Public Television several times, asking for the minutes of the sessions, but received the answer that they were confidential. “Why should this be so? So the word ‘public’ is a big luxury for that board,” he concluded.

Tamara Gevorgyan, director of the Public Opinion Research Center, a member of Public Television, was also involved in the discussion, and was furious that their center was ignored and is in danger of closing.

Member of the Television Radio National Commision (TRNC), Tigran Hakobyan did not understand the functions of the center and that up till now the studies were not published.

In general, the axis of this discussion was the impossibility of being secret and public at the same time. There should be a choice between the two working styles, and only after that the self-cleaning process.

Vahagn Tevosyan, the head of Public Television’s news department, who has been employed after the Velvet Revolution, recalled that now is an exceptional time and opportunity to tell the truth.

“Now the government and society have become one,” he said.

In Tigran Hakobyan’s opinion, political freedom is not a necessary but a sufficient condition for the establishment of Public Television.

“Let’s try to get out of the political discourse and not compare with the former. Otherwise it will turn out that the changes are mechanical and some people have been replaced by others. And Public is not that, it has more complicated dialogues.

Artur Sakunts urged not to forget that no one is bound to say only the truth, and doesn’t even have the moral right to do so.

The media can only provide free circulation of information, and the public itself will understand what the truth is.