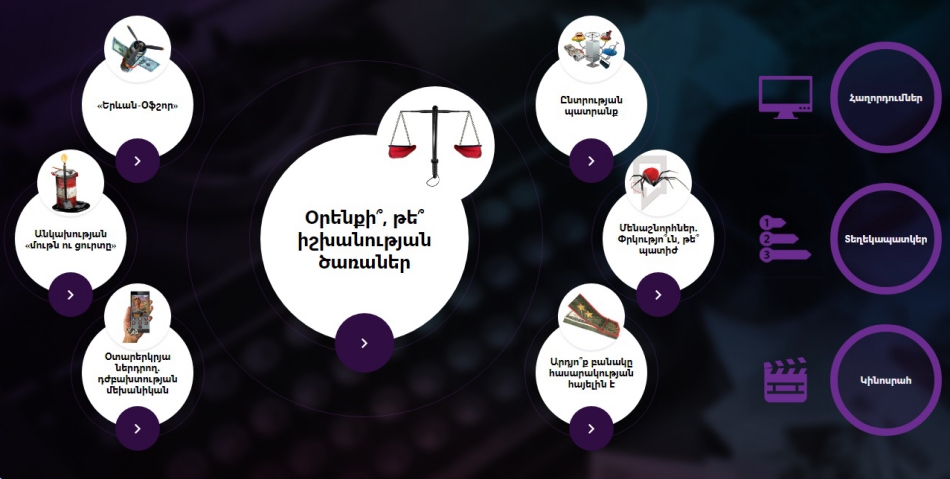 The story of Armenia’s independence is also a story of instances of corruption that capture the public’s and the media’s attention as both daily news and an opportunity for reinterpretation.

The Media Initiatives Center’s Lratun interactive media museum chose the seven most notable instances of corruption from the 90s till today, presenting the story of their news coverage. Lratun studied, categorized, and turned into exhibits years old as well as more recent cases, gathering them under the title Mediamart v. Corruption (Media Battle v. Corruption).

Head of Lratun media museum Vahram Martirosyan compares this exhibit to a journalistic adventure. Museum visitors become participants and are given the opportunity step by step to investigate all the cases, on the basis of media reports and expert opinions.

The Mediamart v. Corruption multimedia exhibit cannot be rushed through; it offers visitors journalists’ sincere confessions and proposed solutions, which have been collected in one platform for the first time. 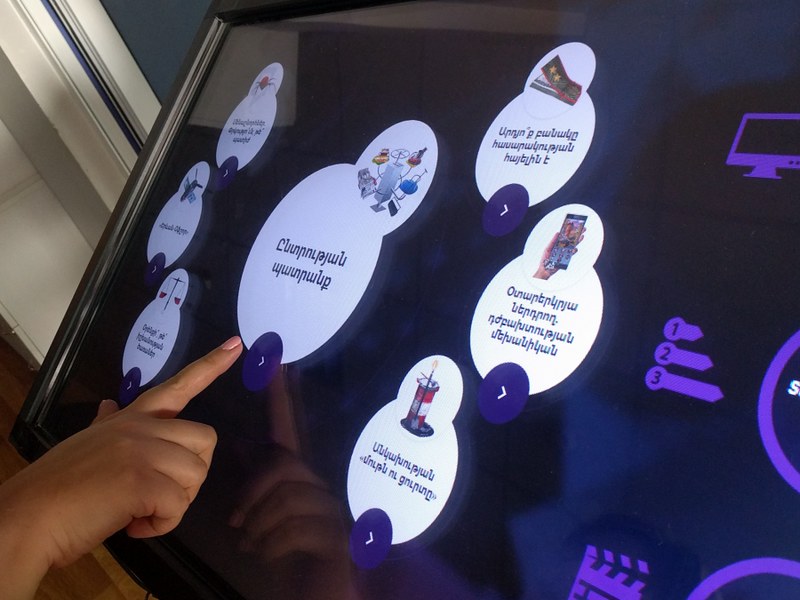 Interviews with investigative journalists and experts were conducted specially for this exhibit. Also, archival materials never before made public have been presented.

Since Lratun operates as a mobile exhibit and its core is comprised of digital materials, visitors can literally play with the materials, observing them on several levels.

For example, follow the development of cases not vertically (deeply factual) but horizontally (in a chain, linked).

Often a case will be intertwined with another not directly but through at least attitude. Ultimately, tolerating instances of corruption is a reason they are ongoing by nature.

For example, one can follow how Armenia by encouraging foreign investments actually hinders the initiatives of diasporan Armenian entrepreneurs.

Or recall how the supply of poor-quality meat to the army becomes an occasion to talk about the influence of the army-society. And how the first monopolies later turn into a corruption pyramid.

The media reflection of all seven of the examined cases is our present, which cannot be masked or ignored.

And in these cases, the media assumes the role of awareness, oversight, and protection, taking upon itself an important public function.

The main tool for corruption coverage is investigative journalism, which is effective if the investigating media outlet is literate from a legal and economic standpoint, has sufficient resources (time and money), and most importantly, follows up.

Martirosyan, categorizing all the materials of the Mediamart v. Corruption exhibit, concludes the following:

(a) The majority of Armenian media doesn’t seriously engage in coverage of corruption.

(b) The majority of Armenian media is not accustomed to publicizing its own work.

(d) Sometimes a media outlet conducts an investigation in self-interest, using attacks on businessmen to solve its own problems.

(e) Punished are those who formerly held those positions, those who were dismissed from office.

The Mediamart v. Corruption exhibit is a good occasion to seek answers “with fresh eyes” to many questions still left in the shadows. And the already meticulously excavated, processed, and digitalized data will help form a picture that’s as complete as possible.

The exhibit opening will take place on February 1, later travelling to different cities in Armenia, inviting people in Vanadzor, Gyumri, and Goris to a mediamart (media battle).

This is Lratun museum’s second exhibit; the first was called An Earthquake that Shook the Media.

The focus of the two exhibits is that at all times it is the media (including also social media) that documents history.