The Hot and Cold of Self-Regulation — or Waiting for EPL 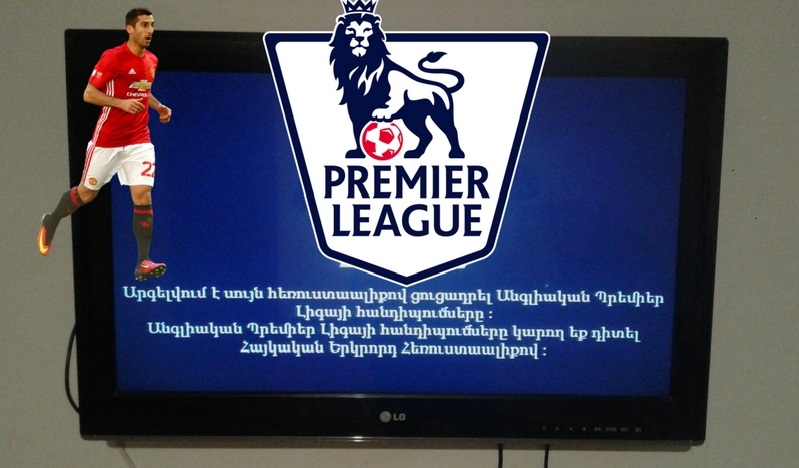 The last round of the season of the English Premier League is set to take place on May 21. During this season, about 80% of the EPL matches were inaccessible for football fans in Armenia.

In Armenia, the exclusive right to broadcast the world’s most expensive football league from 2016 to 2019 was acquired by the Second Armenian Channel (H2).

The TV company showed two matches from each round. The choice of matches was made by the TV company. Since Armenian footballer Henrikh Mkhitaryan plays for Manchester United, one of the two matches H2 broadcast was that in which this football club played.

But in Armenia there are also fan groups of other EPL football clubs, and football fans are not satisfied by the number of their favorite football clubs’ matches that are broadcast.

Since only H2 has the exclusive right to broadcast the matches, cable TV companies shut off the Russian sports channel during other EPL matches so as not to violate H2’s rights.

The issue is that the Russian channel Match (Матч), along with its subsidiary channels, didn’t acquire the rights to broadcast the EPL matches in Armenia.

Even in this era of modern technology solutions, when it’s possible to watch any sports tournament even through unlawful means, football fans raise the issue of watching all the EPL matches through traditional means — on television.

The situation angers EPL fans. Weeks ago, the Premier League’s Armenian-language website had written a letter to H2, considering it natural and logical that the Russian channel Match block in Armenia only those matches that H2 is showing.

“Of the 10 matches of each round, you show only Manchester United and one other match, in general, two matches, but you reserve the right to require the other eight matches also be blocked. You are depriving us of the opportunity to watch the most important matches of the championship, at a time when during those matches there is a cooking show or some soap opera on your channel.

“If you are unable to show all the matches, then at least be reasonable and allow us to watch the matches on other channels,” reads the fans’ letter.

According to information the National Commission on TV and Radio (NCTR) provided to Media.am, an agreement was signed between the Second Armenian TV Channel Company and Saran Media International Ltd. on May 13, 2016, for the exclusive right to show the English Premier League’s football matches.

Issues of copyright and related rights are regulated by the same law. Head of the NCTR Legal and Licensing Department David Margaryan says H2, having the exclusive right to show the English Premier League’s football matches, may notify cable TV companies of this.

It turns out that the cable TV companies have taken the self-regulation route to not violate H2’s exclusive copyright. H2 similarly explains that it did not impose anything on anyone, and did not force any broadcasting to be shut off.

If the channel didn’t impose, then the broadcasting operators did so voluntarily. Ucom confirmed that, considering that the exclusive right to broadcast EPL matches in Armenia belongs to H2, any TV channel broadcasting these matches would be in violation of H2’s rights, which assumes also financial liability.

Asked if, to meet its subscribers’ demands, Ucom is taking steps, whether it’s possible that in the near future it will acquire the right to broadcast reputable championships, including EPL, in Armenia, the company responded:

“Ucom is negotiating with various rights holders, the process and details of which are considered a trade secret. The agreements acquired on behalf of its subscribers as a result of the negotiations Ucom will inform about publicly.”

Main photo: During the broadcast time of the EPL matches, the Russian channel Match displays this notice on the screen.