“Not Abusing Freedom” Is the Media’s Job: Davit Harutyunyan 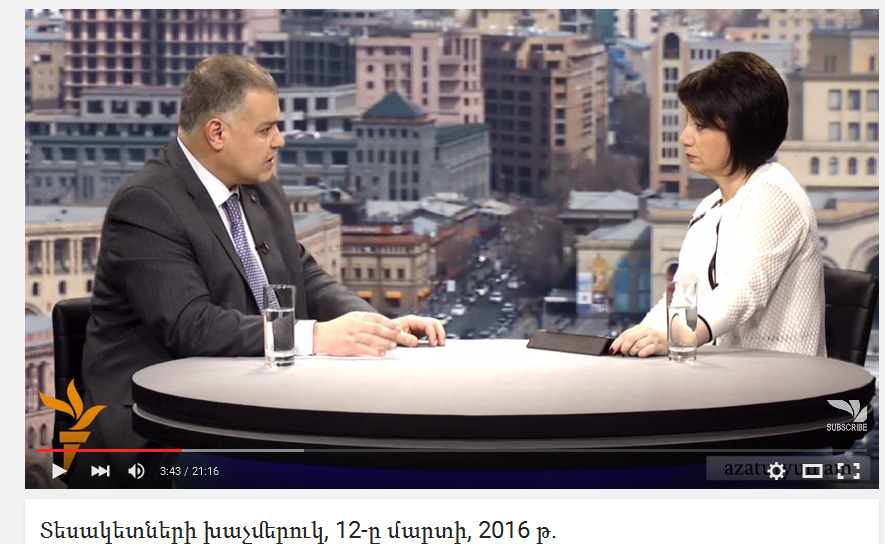 The proposed provision in the new draft of Armenia’s Electoral Code that “during the election campaign, abuse of freedom of the mass media is not permitted,” according to the authors of the bill, “must be implemented through self-regulation.”

Minister and Chief of Staff of the Armenian Government Davit Harutyunyan expressed this opinion on the RFE/RL’s Armenian service (Azatutyun Radio) program “Tesaketnery Khachmeruk” (“at the crossroads of opinions”) [AM].

To program creator and host Anna Israeyelyan’s question “Can you explain what is the abuse of media freedom, how that abuse will be decided, and what liabilities will be applied to media that abuse freedom,” Harutyunyan replied:

“Not all violations necessarily imply sanctions. Very often other regulatory mechanisms are in place, such as, for example, rules of conduct.”

In explaining the concept of “abuse of freedom” of the media, Harutyunyan cited as an example analytical programs, which “very often have a purely propagandistic in nature” and which “are not officially framed as an element of the election campaign.”

To the journalist’s remark that this might be perceived as censorship, Harutyunyan replied, “Everything might be, and for this reason there’s no state sanction here. But it is assumed that there should be a rule: the legislator defines the rule, but as for how this rule will be implemented, it seems to me, by self-regulation.”

Harutyunyan is the government representative appointed to report in the National Assembly on the new government bill on the electoral code, as well as on the draft law to the amendments on election campaigning in the Law on TV and Radio Broadcasting.