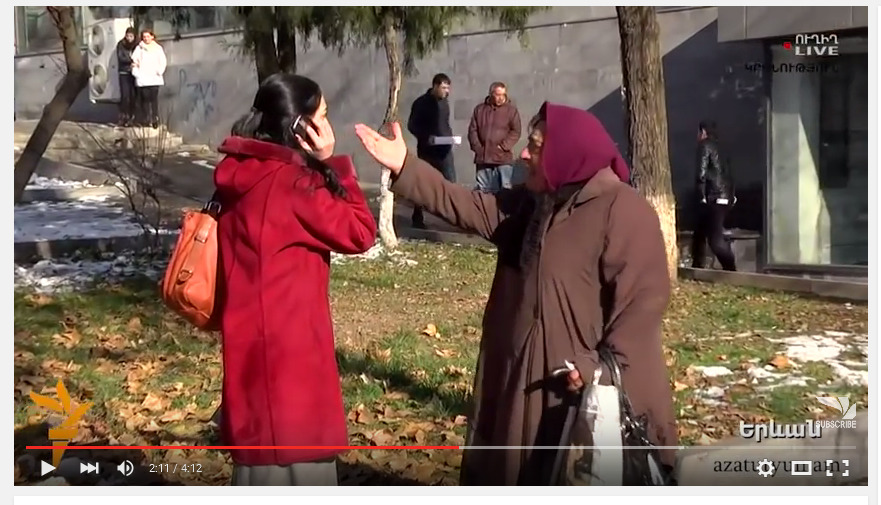 A preliminary investigation has found that on the day of the referendum on constitutional changes, Sirush Hovhannisyan violently obstructed RFE/RL’s Armenian service (Azatutyun) journalist Anush Mkrtchyan and the same media outlet’s camera operator Garik Azibekyan from carrying out their authorities.

Hovhannisyan has been charged under RA Criminal Code Article 149 Section 2 Paragraph 3: Violently hindering the implementation of the authority of a person participating in elections. The offense is punishable with 2–3 years of imprisonment.

Armenia’s Special Investigation Service has completed its preliminary investigation. The case with the indictment has been handed over to the relevant prosecutor, for attestation and to send to the court.

The Special Investigation Service media statement [AM] relays the investigation body’s specified information, that at around 2 pm on Dec. 6, 2015, Hovhannisyan stepped out of the “Yes” campaign office on 56 Komitas Ave. in Yerevan and approaching Mkrtchyan and Azibekyan who were covering the referendum in the area, demanded they stop filming and leave the campaign grounds.

They continued their work, but Hovhannisyan, with the intention of  obstructing their authorities, pushed the journalist, tugged at her clothes, spit on her, and inflicted other insults to her and the camera operator.

The day after the referendum, 10 media organizations operating in Armenia issued a statement on violence against journalists.

The statement read, in part: “[O]n December 6, violence was exerted on two media representatives (Rafael Afrikian, iLur.am, and Eduard Avetisian, Asparez daily). Another 13 faced various types of obstruction of their professional activities. The most repellent of these cases was the behavior of a woman that came out from the ‘Yes’ campaign headquarters, located on 56 Komitas avenue, Yerevan. Blocking the way, she shoved the correspondent of Armenian Service of Radio ‘Liberty’ and spat at her.”

The organizations urged Armenian police and investigation bodies to “carry out a thorough and impartial investigation of all the recorded cases, refraining from attempts to imitate efforts.”