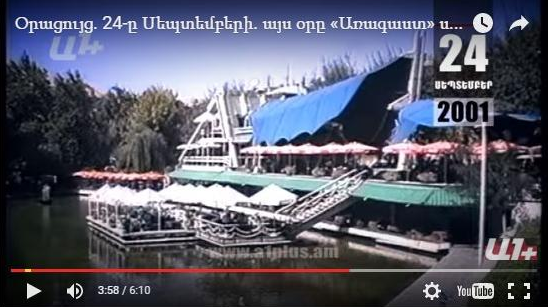 Trchogh Aragast (“Flying Sail”) has summoned to court A1+ TV and Mamul.am news website for harming the company’s honor, dignity, and business reputation. The matter is related to republishing information about the 2001 death (murder) of Poghos Poghosyan at a downtown Yerevan café.

The TV company is going to court convinced that it spread false information neither 14 years ago nor today when it published the archival material; thus, there are no grounds for a retraction. But the plaintiff is going to court convinced that it is false information, which has harmed its honor and good reputation. As compensation, Trchogh Aragast is asking for 1 million AMD (about $2,085 USD).

Each party see intent in the other’s actions and both parties deny intent on their part.

A1+ has a daily program called Oracuyc (“Calendar”) that, according to its archival material, describes what important event happened that day in history. The contested information is one of the episodes in this series, which was uploaded [AM] on the site on Sept. 24, 2015.

The plaintiff considers false the information in this episode that on Sept. 24, 2001, a murder took place in Aragast café, which he owns, claiming that the incident occurred in Poplavok café, next to Aragast, which belongs to Karmir Aragastner (“Red Sails”) LLC.

Trchogh Aragast argues that the news has harmed its honor and good reputation. According to Hasmik Pakhanyan, who is defending its interests, her client contacted A1+ first and then Mamul.am, which republished the same information, citing A1+, with a request to retract the information. She says the former refused to retract the news, while the second added, you can take the matter to court.

Head of A1+ and Meltex (the parent company) Mesrop Movsesyan says there is no reason to retract the information, since when the incident occurred, in September 2001, the entire restaurant complex was called “Aragast”. According to him, the separation occurred in November 2001. Told that the the other party says it was 1997 and not 2001 when Aragast split into two separate business entities, Movsesyan replies that the documents they presented to the court identify November 2001 as the date the separation occurred.

As explained by the A1+ director, besides the year of separation, the incident occurred in the bathroom, which at the time was shared: “We also have archival video footage of the general prosecutor’s press conference, in which he also speaks about this incident as occurring in Aragast café. The café’s same name is noted in Wikipedia. Why don’t they want to change it in Wikipedia, [but] they want to change it with us? That also specifically interests me.”

This Debate on Information Is Not New

Hasmik Pakhanyan says, “This is not the first time A1+ spread this information, and every time it writes something, it again mentions ‘Aragast’. This shows that there already appears to be intent here.”

Is there a personal disagreement with Trchogh Aragast’s owners? Movsesyan, in conversation with us, denied this, saying he doesn’t know who the owners are.

Trchogh Aragast’s current owner Nzhdeh Geghagulyan is the son of [former Defence Minister and Prime Minister of Armenia] Vazgen Sargsyan’s bodyguard Movses Geghagulyan, who owned this restaurant complex when he was still alive. Is there perhaps some old, outstanding dispute?

“But how should I know who the owners are? Or, what problem could I have had with Vazgen Sargsyan’s bodyguard? And I didn’t gather information about the plaintiff because I consider this legal claim absurd,” said Movsesyan.

What About the Statute of Limitation?

Under this Armenian Civil Code article, a lawsuit may be filed in court up to one month after the individual becomes aware of the defamation but no later than six months after the moment defamation was said to have occurred. Isn’t the moment of defamation in this case the first media report published 14 years ago?

According to attorney Hasmik Pakhanyan, no: grounds to solve the old dispute through court were established when on Sept. 24 this year A1+ TV republished the Sept. 24, 2001 news story — “With the same false information.”

A1+ doesn’t dispute the matter of the statute of limitation. Its launchpad is that it didn’t publish false information.

In any case, won’t this dispute set a precedent in Armenia, of online publications of archival material becoming grounds for many such legal disputes? In the opinion of European Convention on Human Rights specialist Ara Ghazaryan, this really is the first such case in Armenia, and it certainly will set a precedent.

“According to the ‘internet publication rule,’ which the European Court of Human Rights set in stone with its precedents and the OSCE with its guidelines document, republishing the archives is [considered] a new publication — together with all the claims directed at it.”

Ghazaryan explains that with the ‘internet publication rule,’ a journalist is relatively less protected when publishing archival material than breaking news: “The reason is that in the case of breaking news, it’s somewhat understandable that the journalist, in his rush, might in good faith get confused, rush, make mistakes… Breaking news is a perishable good, while in the case of archival material, the rush factor doesn’t play as much of a big role; thus, the journalist’s protection in this case is relatively less.”

In conversation with Media.am, the specialist mentioned that for republication of archival material there is also the opposite approach, which is called the ‘single publication rule,’ and which is practiced in, for example, the United States. According to this rule, the publishing party may be subject to liability for an insulting or defamatory expression only once: “That is, if the story or the archives are republished years later, the publishing party is not subject to liability. This is an American approach, which is not adopted in Europe.”

In fact, it turns out that this issue related to publishing archival material as a phenomenon is very old and has about 160 years of history. As Ghazaryan describes it, it began in England: “But if before the reason was republication of books, now the Internet has made this phenomenon much easier and more frequent.”

The first court hearing in the case of Trchogh Aragast v. Meltex (A1+) is set for Feb. 2, 2016, at the Court of General Jurisdiction of Kentron and Nork-Marash Administrative Districts of Yerevan.