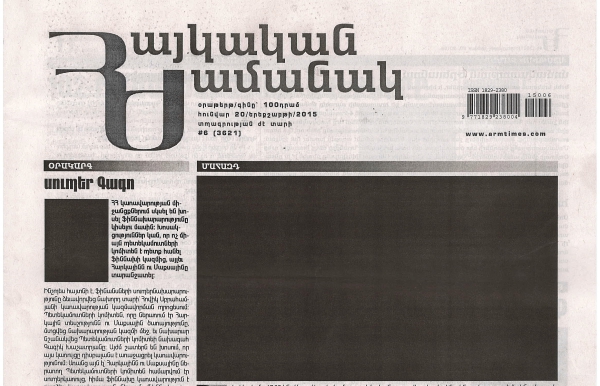 The January 20, 2015 issue of local opposition daily Haykakan Zhamanak (“Armenian Times”)  was published without photos, ads, or the crossword puzzle. Instead of images, the newspapers’ pages contained black squares.

By “blacking out” its images, Haykakan Zhamanak joins the demand for declaring a national day of mourning in Armenia after the death of six-month-old Seryozha Avetisyan, the last member of the Avetisyan family murdered in Gyumri. 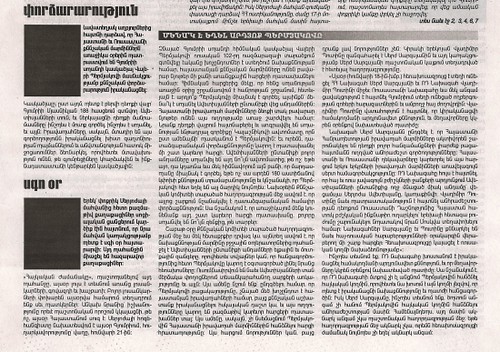 On publishing the issue without images, Haykakan Zhamanak writes: “Regardless of whether the authorities make any sort of official decision or not, today there is mourning in Armenia.” 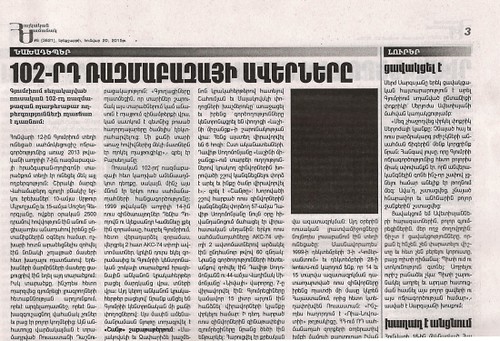 Six members of the Avetisyan family living at 188 Myasnikyan Street in Armenia’s second-largest city, Gyumri, were murdered on January 12. The only surviving member was six-month-old Seryozha Avetisyan, who had a severe injury from being stabbed in the chest. The infant was moved to Yerevan’s St. Mary Medical Center. For one week, Seryozha was under the constant care of doctors and specialists, but it was not possible to save his life and he died on January 19.

The main suspect in the murder of the Avetisyan family is Valery Permyakov, a soldier stationed at the Russian 102nd Military Base in Gyumri. He is currently under arrest.