Issues of the Media in Syunik Region 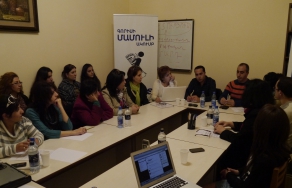 Of the three TV stations [AM] in the southern Armenian region of Syunik that have a broadcasting license, Kapan’s Sosi TV [AM] is the only one that will be broadcasting on the public digital network after the digital switchover on July 1, 2015. The fate of Sisian’s Syuni and Goris’s Last TV stations remains uncertain: the current legislation doesn’t define the future of regional TV stations.

Last TV, which broadcasts eight hours a day, with 10–15 minutes news segments updated twice a week, has not yet found a solution. The TV station is faced with a lack of financial and human resources.

Goris Press Club [AM] President Susanna Shahnazaryan thinks that regional TV stations have to address the matter with joint efforts.

“They have to unite in one company which will have a manager, a fundraiser, and journalists because the state of regional media today reminds one of a one-man show. A staff of three people can deal with everything,” she says.

Apart from the 3 TV stations broadcasting in a region with a population of about 140,000, there are also cable TV companies (Khustup TV and Angegh TV) and a few newspapers (Zangezur, Sisiani Dzayn, Syunyats Yerkir, Vorotan, Ban u Gorts, Kamq, and Grakan Syunik), the total circulation of which does not exceed 3,500.

There’s no printing press in Syunik region: the newspapers are printed in Yerevan, which, according to local journalists, affects efficiency. The lack of a printing press, however, is not the only reason for the lack of up-to-date information: the unavailability of information also creates a problem of timeliness.

Journalists often cannot get official information from local self-governing bodies. Syunik reporters are forced to verify even news about the weather forecast from Yerevan.

According to journalists, local self-governing authorities usually possess the required information; however, they refer reporters to contact “headquarters”.

The limited financial resources of newsrooms is another obstacle to conveying information to the public. Media outlets are unable to send reporters to the surrounding villages to cover villagers’ lives and report on their problems.

Lradadar Club, an initiative of the Media Initiatives Center, is an informal gathering for journalists and others working in news media to have professional discussions on the media. This article represents the discussions held at the Lradadar gathering in Goris, Syunik region.