From YouTube to Rutube: Armenia TV Chooses to Stream Videos on Russian-Language Platform 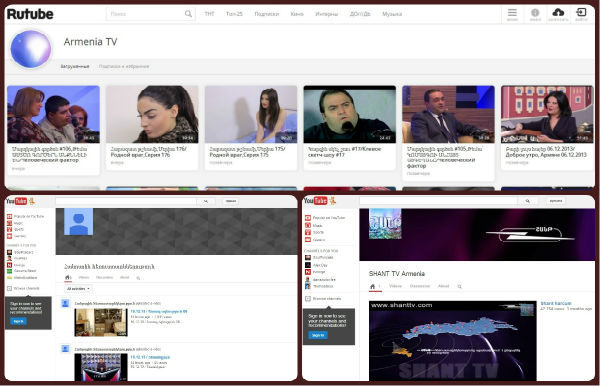 Unlike other Armenian TV companies, which continue to upload their videos on the large US video-sharing website, Armenia TV has opted to upload its video content on the Russian video-streaming platform.

According to the head of PanArmenian Media Group‘s IT department, Ruben Muradyan, Armenia TV chose Rutube for the monetizing option it offered.

“We are testing monetization — options of making money from our video content online. For a long time, about one year, we were working with YouTube. Then we saw what Rutube offered and realized that the option proposed by the Russian video portal was more interesting, since we were receiving less money for the same number of views on YouTube,” he says.

In Muradyan’s words, advertising by Rutube’s partners appears in any part of Armenia TV’s videos, for which Rutube transfers a portion of the advertising revenue to Armenia TV.

Media expert Artur Papyan considers Armenia TV’s preferred model logical from a business perspective, at the same time point out that Rutube’s reach is not comparable to that of YouTube. On the other hand, in Papyan’s opinion, YouTube is TV companies’ number one enemy.

According to him, the conditions the world’s largest advertising agency, Google, offers to TV companies are not profitable, since Google, which is earning big bucks on the same content, pays the TV companies peanuts.

“Armenian TV companies operate on YouTube at the global market level, but our audience is incomparable with those of US TV companies. And if advertising earnings can somehow be profitable for an American producer, the number of views of Armenian TV companies[‘ videos] is so small that you cannot talk about significant amounts,” says Papyan.

Papyan says that, to his knowledge, Google calculates advertising screenings and clicks by paying on average $1.5 to $3 per 100 views.

“If we take into consideration that those in Armenia considered to have major YouTube channels have 50,000 to 100,000 daily views at most, the maximum [advertising] income they can receive is $6,000 monthly, which is a very small amount for a TV company. And I won’t even mention that the coupons Google usually sends are a headache to cash out in Armenia,” he said.

A1+ was the first TV company in Armenia that opened a YouTube channel. Since 2008, it’s partnered with YouTube; it has 27,234 subscribers and more than 33 million views (the daily minimum is 20,000 views).

Users who regularly upload content that doesn’t violate copyright can contact YouTube to become a partner. YouTube offers a monetization service to partners, with which users can decide themselves what type of advertising to place in any of their videos.

“We became a YouTube partner the day after we launched our channel. They even called us, sent us a certificate of partnership. And we were the first [Armenian TV company] to monetize the content. It’s true, the income from YouTube is not great, but, nevertheless, there is income,” says A1+ producer Susanna Ohanjanyan.

Prior to moving to YouTube, A1+ had its own video hosting.

“We began to move the last videos of 2007 to the server, but the traffic was so great that the [internet] provider refused to work with us, and we were forced to move to YouTube,” she says.

The A1+ producer doesn’t rule out the possibility that after reviewing the conditions Rutube offers that the company may decide to upload their content also on the Russian video streaming site.