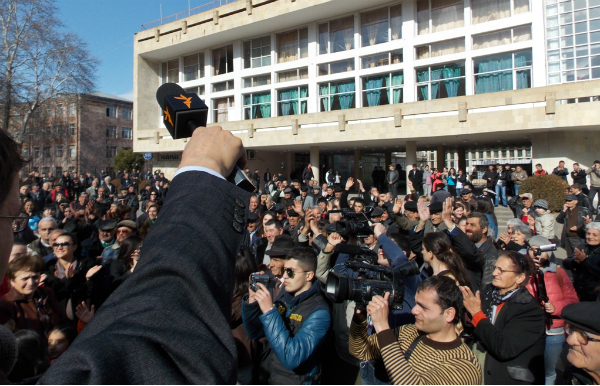 Opposition leader Raffi Hovannisian’s post-election rally in Kapan, southern Armenia, was covered by only one of two local TV stations.

Sosi TV, which has a broadcasting license in the province (marz) of Syunik, reported on Hovannisian’s visit in its news program Lurer.

The TV station’s director, Vahe Sargsyan, says the TV station is working in the post-election period as it did during the pre-election period — without any changes. With the video footage broadcast on Sosi TV, viewers were presented with the complete picture of the Kapan rally, including excerpts from Hovannisian’s speeches. Also broadcast on Sosi TV was Raffi Hovannisian’s visit to nearby Goris.

Hovannisian’s Kapan rally, however, wasn’t covered by the other TV station based in the region — Khustup TV. “We didn’t cover the pre-election processes, and neither do we want to cover the post-election process,” says Khustup TV’s director and chief editor Sasun Manukyan.