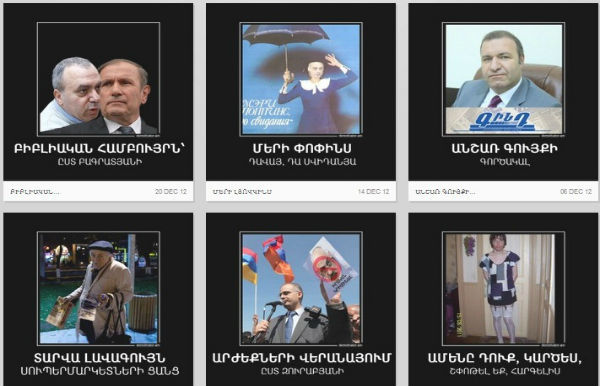 The parliamentary deputy finds that the blogger’s demotivational poster harmed his honor, dignity, and business reputation.

As compensation, Urikhanyan is demanding from Barseghyan, the blogger, a public apology and 1 million AMD (about $2,476 USD) for defamation, 500 000 AMD (about $1,238) for legal counsel fees, and 30 000 AMD (about $74) for court fees, as well as removing material sullying the MP’s honor and dignity from the Demotivator.am and Blognews.am websites and social networking sites.

According to the blogger, he had no intention of insulting the MP.

“It’s my subjective opinion that in our country, which has many unresolved problems, a Member of Parliament, who has to be in the front lines to fight those problems, spends time to appear stylish and to send press releases about it. And since we’re talking about style and fashion, which for me in the first place is associated with women, I created the image with a woman’s body, and I don’t think that being compared to a woman is an insult,” says Barseghyan.

According to Urikhanyan, however, the aim of suing the blogger is so that no citizen will have the right to insult another citizen in the Republic of Armenia.

“If in the blogger’s opinion it’s not an insult, then from now on he will see in different places his and his close friends’ portraits photoshopped on the bodies of half-naked models; then I will attempt to listen to his opinion whether it’s an insult or not. I have many other interests, and I don’t occupy myself with photoshopping images, but I’m sure all those who understand quite well what’s going on will take appropriate action in this context,” says the MP.

According to Urikhanyan, if he was able he would ask for more of a penalty than one million dram in compensation.

“If I win the lawsuit, I’ll publicly direct the money to charity, so that no one gets any other ideas about the need for the money,” says the MP.

Media expert Samvel Martirosyan finds that if the MP wins the lawsuit it might set a dangerous precedent.

“If the court rules that Edgar was wrong, we’ll have a precedent that any opportune and influential caricature might become a target for the courts. And it goes without saying that having a convicted blogger will put Armenia in the company of very interesting countries,” he says.

Lawyer Gevorg Hayrapetyan finds that the demotivational poster is not an object of insult or defamation. The blogger intended not to insult but to convey information through an image.

“In this case the blogger made use of satire, and in satire creating is a right, which is protected under the European Convention of Human Rights. Satire itself implies exaggeration, which is lawful and normal,” he says.

According to the lawyer, generally if the expression of published content is satirical, it not only is not subject to accountability, but also provides for additional protection of freedom of expression for the journalist who published the content.

“On the other hand, the European Court on Human Rights has ruled that political and public figures have to be more patient and tolerant of criticism made of them,” says Hayrapetyan.

In the lawyer’s opinion, the MP’s victory in court will endanger freedom of expression.

“If the court rules in favor of the plaintiff, it might become a worrying precedent for violating the right of freedom of expression and more so of media freedom. After that, all caricatures, depictions, which were done long ago and are used by various news outlets, will become an object of argument and that style [satire] will completely die,” he says.

On Facebook, in defense of the blogger, the flashmob “I am suing Edgar Barseghyan for…” has begun, where users for various satirical reasons supposedly are taking the blogger to court.