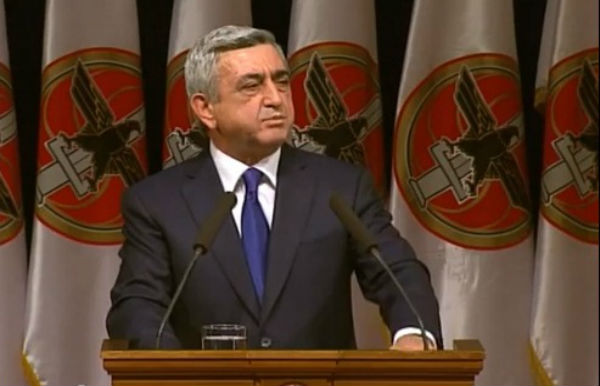 RA President Serzh Sargsyan, in his speech at the 14th Republican Party of Armenia Convention, as an important achievement also mentioned the liberalization of media.

“We launched and brought to completion a number of critical official investigations. We put forth our collective will against connivance. We rejected outright a malicious practice of using force against journalists, opened up the media and restored the right of TV channels to access the spectrum.

“We dumped public communication from the position of strength and restored the right of people to be in opposition without labeling them traitors,” he said in his speech.

We asked local media experts and editors their opinions on this excerpt of the president’s speech relating to the media.

In the last 4–5 years, television, indeed, has become quite liberalized. On television today information and opinions can be heard and opposition figures can be seen — several years ago this was simply impossible to imagine. However, I believe that the governing authorities made that move not because they were committed to the principles of free expression and media freedom, but as a result of very pragmatic reckoning.

The authorities felt that the spread of the Internet and the mass adoption and use of social networking sites make the publication of any information or opinion inevitable. Accordingly, the authorities understood that it’s better to do this of their own initiative, by their own news outlets, which allows a certain level of control, than senselessly fight against free expression, which, whether you like it or not, will resound.

It also allows the authorities to appear to the international community as a more democratic, open, and transparent government. But let’s not forget, that these same authorities declared a state of emergency and blocked the media during the events of Mar. 1, 2008.

There really is freedom of expression and media freedom in Armenia, but unfortunately, it bears more of a symbolic significance. In practice, expression, the media, and journalism, as a part of a system of public governance, are deprived of the opportunity to influence public decisions. You can write and speak about everything, but all the same, the authorities do that which stems from their interests.

As for freedom on television, if we’re talking about the election or political coverage, the degree of diversity has significantly increased in Armenia, but concerns remain in the sense that all that’s being done with journalism and journalism leaves the impression of a sort of managed democracy.

That is to say, the feeling is that the situation could change at any given moment; that these aren’t radical, but rather situational changes; and so that media diversity, freedom of speech, and journalists’ independence and safety become the law of our life, many things still have to be radically changed in Armenia — both at the legislative level and in terms of policy implementation.

The reality is that the news media arena today simply cannot be compared to the situation that existed during the second president’s term, when there were lists of banned guests and topics for TV stations. Now even those TV stations that purely aim for entertainment try to have some debates or political programming, and in this sense the situation is much better.

It seems to me that those twenty-minute broadcasting slots were given to A1+ for that reason, for it to be possible now to make such a claim that “restored the right of TV channels to access the spectrum.”

But I don’t believe that the issue of A1+ [being deprived of a broadcasting license] has been resolved. It will be considered resolved only when that TV station is completely on air, and the matter of A1+ being on air, nevertheless, remains pressing, since the main question especially of TV stations is that they remain controllable.

That is, they wanted, they closed before the opposition under the former president; they want now they opened it or partly opened it under the current president’s term; tomorrow, if they want, they’ll shut it down again. But there’s a demand that there’s at least one TV station on air that will be outside the scope of that controllable game.

After listening to Serzh Sargsyan’s speech, would any official attempt to work that way the following day? Many parliamentarians and officials who were sitting in the room, did they perhaps not feel a pang of conscience for their remarks and behavior, and insults and violence over the past four years toward journalists, that they, nevertheless, do such things, while it seems to the president that generally everything is normal in our country?

Mesrop Movsesyan
President, A1+
Interview from Hayeli Press Club [AM]

A question arises for me: what does it mean that “we provided airtime to TV stations that were shut down”? One of those that were shut down was A1+; we don’t have airtime; we have an arrangement, and to turn that into an object of political manipulation and again accuse the opposition and A1+ of politicizing the matter becomes an absurdity.

Serzh Sargsyan himself politicized this issue and began to manipulate it. I would say that Sargsyan offered lip service to ArmNews’ management, which, based on its business interests and ambitions, made the offer [of providing airtime to A1+]. Their game, in fact, failed.

In September, a six-month contract was signed: that means that on Feb. 10 [2013] our contract might not be renewed — what does that mean? That A1+ was again deprived of broadcasting on air? Today they’ve given [airtime]; tomorrow they take it away? And who does all that, the president? And this is considered a democratic country, something we are still proud of. This is an act at the infantile level; it’s laughable — let them open it, close it, do whatever they want.