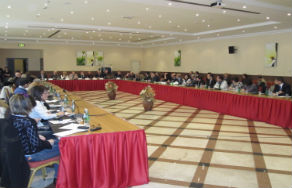 Mass media and their freedoms, legislative initiatives and the practice of enforcement in Armenia in 2010 was discussed with the participation of state officials and representatives of international agencies, civil society and the media community at the conference “Mass Media in Armenia: 2010 Reflections and Trends for the Future” today.

Studying the Law on Television and Radio and other legal acts regulating the sector, Armenian and international experts noted a number of shortcomings. They stressed the need to introduce a simple licensing procedure, as well as the need for the body providing licenses to act independently from the government.

According to Andrei Richter, head of the department on Modern Russian Mass Media and Media Law at the Faculty of Journalism at Lomonosov Moscow State University, one of the main gaps in the law is that the model regulating broadcasting is not clear and transparent and can be interpreted in different ways, and such laws are not for appropriate for a democratic state.

Another issue is the suppression of licensing, which, according to Council of Europe specialist, Information Society Organization consultant Christian Müller should be viewed as a last resort. He finds that the law should prescribe milder sanctions.

Journalist with the local daily Aravot (“Morning”) Anna Israelyan, who has covered the broadcasting licensing competitions and frequency tenders, said, in truth, a competition has not taken place, since everything was planned beforehand and developed according to an agreed scenario. According to her, there was real competition only in two cases — for Gyumri’s GALA TV and A1+ — while the entire competition process became mainly an imitation, due to the lack of real competition.