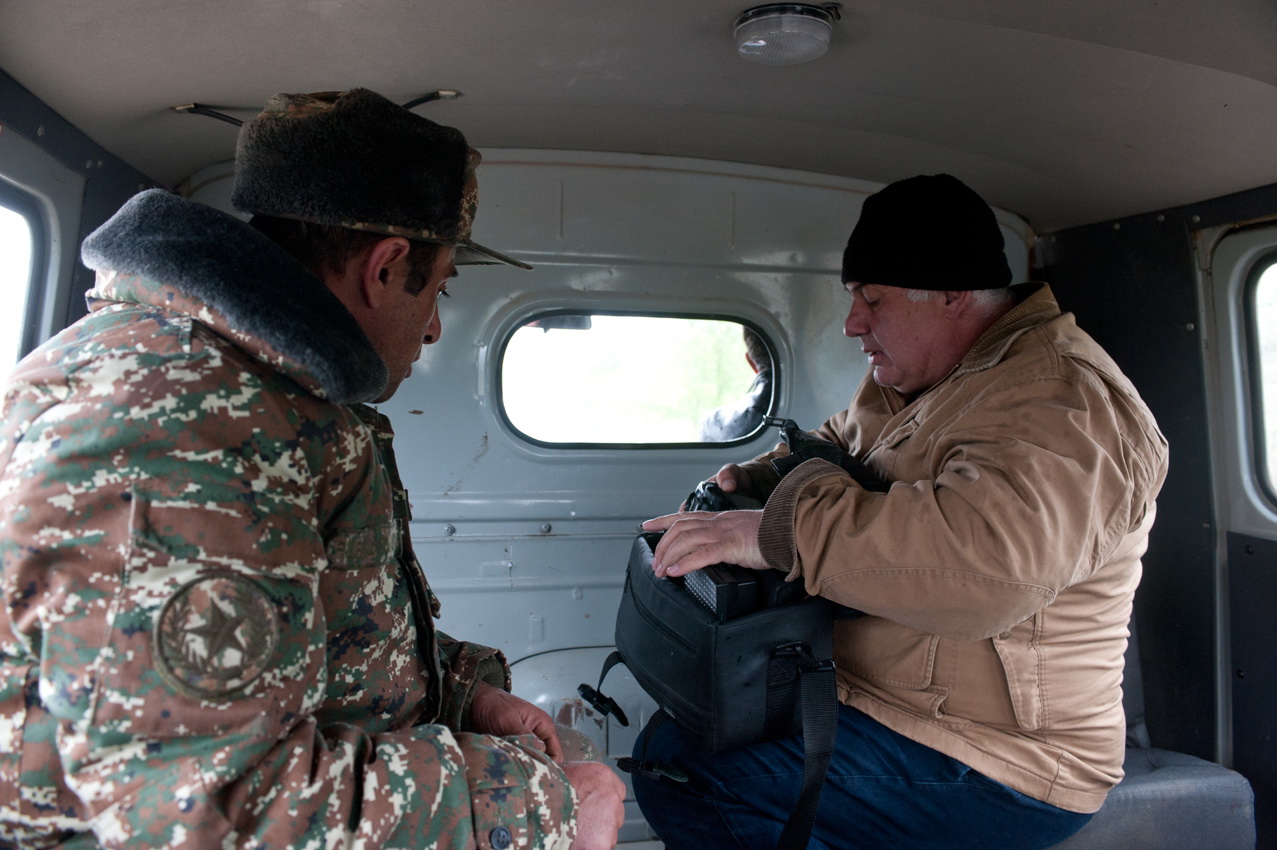 Photographer, cameraman Hakob Poghosyan has gone through almost the entire course of the Artsakh war through his lens, his footage documented the conflict, the death, and the victory.

Working almost four years in the war zone, the photographer has been able to, through his own experience, master the working rules of photojournalists working in conflict areas, adopt them, creating lasting shots for history and generations.

The difference between a soldier and a cameraman is that the soldier seeks a target, the cameraman or photographer does not.

“During military operations, the most difficult thing is the first moment, it is necessary not to panic, to gather yourself, catch the scene correctly and photograph it. For the cameraman the most important thing is the requirement of caution. The difference between a soldier and a cameraman is that the soldier seeks a target, but you do not. You cannot look for a target, you must quickly make your choice, let your ear be close to the sound of explosions, wherever there is an explosion, there will be dead or injured people there, it is imperative to reach and capture the moment, and most importantly, the moment of battle,” stated photographer, cameraman Poghosyan.

He says that when in 1992 he decided to go and videotape the war, he did not have any fears, and did not even think about the dangers, his only goal was to reach Karabakh.

“There is an inner strength, which takes you to that moment where you do not think about anything other than fulfilling your professional work,” notes the photographer.

After working in the conflict zone he places importance on the photojournalist’s sense of smell, their inner instincts and the right information, which results in being in the right place. As an example he presents the work he has done in Talish during the four-day war:

“On April 3rd, when we entered Talish, the village was already empty, but we had information, that in some of the houses there were still people. I was in contact over the phone, they were constantly saying to go further up towards the upper part of the village. Of course, there was a risk, but I again did not feel it. I knew those areas well, I worked there 1992-1993, I understood that constantly going towards the upper part meant going to Azerbaijan’s side. On the other end of the phone information was transferred to me that the village was almost ending. They were constantly bombing, we found the house, but with murdered villagers,” describes the photographer.

After the four-day war in April all those dangers are brought as one, which have all passed and been overcome, but stress and those heavy feelings, after filming the blood, will never pass.

“In all of us sits that pain, years later, when we meet with the boys, talk, speak, and understand, that time is not capable of passing the pain that sits within us,” says Hakob Poghosyan.

When death appears in the frame

On March 27, 1993, during the military operations waged in Tonashen village in the surroundings of Martakert, Hakob Poghosyan’s camera was fixed on how freedom fighters Sako Harutyunyan and Hayk Verdyan were fatally wounded.

“After filming the boys from behind I suddenly see in my footage that they have hit Sako, he fell. I am screaming “they hit Sako…”, I put the video camera on the floor, without turning it off, no matter what type of situation happens, we never have the right to turn off the camera. I want to run to help them, but it becomes apparent that my leg has also been injured. A fragment has entered and passed through my leg, but I did not feel it. Shots were being fired, for 10 minutes it was not possible to go near the boys. I cannot find the words to describe my feelings, it was a shock. All that was twice as heavy, because they were also my friends,” said Poghosyan.

The photographer promises that he has taken shots, which he is not able to look at today, but at the same time, is shocked at how he was able to take them.

“Around Hadrut Hospital I am documenting 40-minute surgeries, Hadrut has been bombed by needle bombs, the doctors were removing those pins and snaps. The shocking thing was that when my eye was looking away from the camera’s lens, I was not able to look at the surgery, I was closing my eyes, but through the lens, with open eyes I was documenting. The video camera or camera is a shield for us. There has been a case when after filming the burial of one of our heroic boys, I asked them to close the coffin. I had filmed him during his life and filming the burial was terrible for me,” he says.

The photo, especially the portrait, usually comes out successfully when you know the person.

“You must understand what kind of character the person has, so that later they don’t say it’s a passport photo. I have begun to take photos of the actions of Yeraskhavan. During that time, when many were killed, I was not taking it so hard, but in Karabakh, where I spent months and years with the boys, sharing a slice of bread, the losses were severe. And again pain, again stress,” explained the photographer.

There is one principle: if you pick up a weapon, you are devoted to the weapon, if a video camera or camera, it means your work is to film.

“The loss of my friends never compelled me to take up arms. The gun never leaves, even when a person very close to me has fallen, I did not replace the camera with the gun, I continued to fulfill my obligation: to film. My friends were very dear to me, I took photos of them, videos, but there has never been a case when I have thought about revenge…for us that is of strict importance: to know that border,” says Hakob Poghosyan.

Videotaping and taking photos has always interfered with his work. During military operations, he did not take photos. He notes, that it is easier to videotape battles.

“Videotaping is dear to me, in the moment you understand, that it is an incredible speech and movement, and you must have that. If there are good dynamics, it is already a good photo. The boys often said to me: “Don’t take photos”. But when they begin to shoot, it passes. There are also people who are opposed to it until the end, you must be able to catch them, they may not realize, but you know, that you are documenting a story,” says Poghosyan.