The Opposite Effect Of Aggressive Campaigns

The snap elections in Armenia showed how important it is to take into account simple truths. For example, if a political force that wants to run the republic builds its campaign on humiliating its electorate, it will fail.

You can threaten to humiliate the opponent, but not the voter.

No matter how much money, connections, and inner conviction you have that you are good, the only one and the savior, you still have to talk to the voter, listen to them, and let it not sound condescending but actually try to understand them.

You can not run an abstract campaign with high-quality printed posters, eerie media praise, and by throwing various pieces of information involving singers, nomenclature intellectuals, dozens of media resources, and social network influences, if you do not pay attention to the voter.

Moreover, you calmly admit that you are already in the position of the elite and the electorate is a low-class mass for you, “mud,” “sheep,” “herd,” “homeless,” “nationless,” “biomass” and so on.

They voted for it even when a few days ago they did not have such a desire (they did not come to a decision, they did not see a future with Pashinyan and they were suffering from the burden of defeat in the war).

But if there is a struggle for survival, the main instincts join. And the primary instinct is fear. People were so horrified by the thought of the former political forces thinking they might return with their semi-bandit-semi-Soviet laws, that they brought their votes and handed them over to Nikol Pashinyan on a tray lined with blue. At the same time, the smaller political forces were deprived of the chance to appear in the National Assembly.

The former forces worked best in favor of the force that left the revolution halfway. Probably because they are really former and as the classic said, they are very isolated from the people and the opposite selection that took place over the years did not allow them to soberly assess the present.

This campaign was extremely aggressive in terms of vocabulary, the volume of manipulations, and media attacks. And like any aggressive stance, it had the opposite effect. At some point the escalation had no place to develop anymore, it was so intense that it reached its simplest manifestation, yes or no.

Saying “yes” to a political force defeated in a war means that the citizens have a great desire to be heard. The Civil Contract party offered to listen, the “Armenia” Alliance did not have such a goal.

And it does not matter that both forces built their campaign on hatred. The important thing is that a force directed hatred at the voter, transmitting it with all its media satellites, that it is “mud,” “herd,” “zombie,” “sheep.” And they are strong, smart, black-clad, and rich, that is, in their opinion, elite.

Nikol Pashinyan went to Syunik in April, ate spit and dirt as if he heard everything you can imagine addressed to him, and suddenly it turned out that Syunik had chosen him. But in reality, it was not sudden, but natural, because even in the most difficult situation of talking and listening to the voter, the attempts to speak remain in the memory. People saw that they were being listened to (what will happen next is another matter).

Some may consider it populism, but that is how they win all elections if they are elections and not imitations.

The question is with whom you identify and on whom you bet. Men in stained white shirts, who hardly smile (smiles are not allowed for Chekists and “thieves”), but have a lot of money, became the core of the “Armenia” Alliance. They were joined by the most discredited class – the so-called intellectuals and representatives of show business, who always depend on high sponsors and come up with numbered lists.

The support of journalists was also one of the pillars of the “Armenia” Alliance’s campaign. And the journalists, not only the media presented by them. Many journalists without hesitation wrote on their walls (social networks) about mud, herds, zombies as if it were a rule.

Probably, the journalists have never fought with such activity and diligence, exaggerating and aggravating the already hateful speech of the political forces. There was even an impression that those responsible for the PR of the “Armenia” Alliance had started a race of journalists and promised to reward those who would praise Robert Kocharyan more, rudely and outright and describe Nikol Pashinyan in more disgusting and unpleasant words.

And the journalists entered that struggle with such readiness that in reality they only hindered their leader.

It is safe to say that if the opposition media had been more restrained and acted as a special buffer between the past and the present, the audience (the voter) would have tended to choose not the one who brought defeat, but the one who promised stability.

But the unprecedented volume of media support led to the opposite effect.

It is interesting that the journalists, being rather dependent and not very financially secure people, quickly mastered the attitude of the elite. This is how propagandists work, but journalism cannot work like that, if only because journalism is always about people, roughly speaking, “dirt,” a homeless person, a villager, an unemployed person, and so on.

Journalism talking about the elite is fake, although, of course, when you repeat fake things a lot, one day you sincerely start believing in it. They also presented themselves as a victim of pressure and a martyr for free speech.

Journalists and various experts who were spreading obvious propaganda created a social network noise with one goal, to show that soon they will not be the opposition, but the ruling elite.

And that also frightened the voter, whom those who call “zombies” with great pleasure do not know at all.

“Civil Contract” lost a lot, but was re-elected. And this is a huge down payment, which now must be accepted more restrained than ever. Happiness is more unpleasant than victory than the vocabulary with which Nikol Pashinyan threw the knot to his opponents. (His opponents later tried to get the people’s sympathy in the same language, but the content did not change, and Pashinyan is a better orator, even when swearing).

From the point of view of PR, it is no less important with whom the voter identifies. And here the class division is important.

Civil Contract can easily write “Nikol” on the posters, and the “Armenia” Alliance cannot write “Robert,” because for the people he has never been Robert (maybe he was “Rob,” but it would be difficult to write a poster, it is rather more associated with terror, not intimacy and equal conversation).

In any case, the fear factor was the most important in this election. Moreover, the fear is also from this media terror and fake polls.

Both before and during the campaign, the “Armenia” Alliance was constantly creating a belief in the audience that it had huge support both inside the republic and in Russia. The opposition media was constantly drumming to that beat, assuring that his victory was inevitable.

The Civil Contract did not need to do much, the opposing forces did everything for it.

When the opposition media shows numbers twenty times a day and refers to the polls showing the victory of their preferred force, it testifies to only one thing: they want it to be so, but it may or may not be so.

Usually, when it is known how the majority will vote, the voter either prefers to become the majority or not vote at all.

In 2021, the exact opposite happened in Armenia. Voting began, despite the force declaring itself the leader.

A few months ago, it was clear that in this election, a huge percentage of undecided voters make up 47%. That percentage eventually went to Pashinyan, also due to sociological and journalistic polls spread in the media.

The results of the Armenian Gallup showed the “Armenia” Alliance leading (Gallup’s reputation is now in serious question).

Those polls, albeit unknown and vague, but which were well-circulated in the media, whose roots were in Russia, wanted to persuade the same.

For example, Russian propagandists Aram Gabrielyanov and Margarita Simonyan entered the media game as guarantors of the victory of the alliance led by Kocharyan, claiming that they have exit polls of Russian structures and Kocharyan is the leader. They even rumored that there would be clashes and protests, and it is well seen from Moscow. 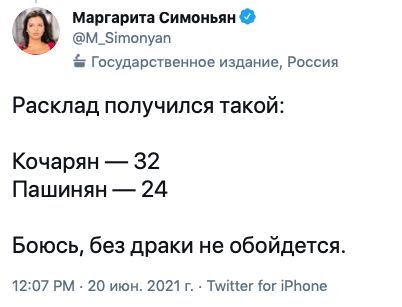 The media and journalists were very active, convincing in their reports that Nikol was losing and Robert was winning. There were a lot of vox populists, street polls, which convinced that they were cursing Pashinyan and praising Kocharyan.

Those polls were crucial. Unoriented people went to vote against the “Armenia” Alliance, realizing well that the only counterbalance is the Civil Contract.

Quantity is important for propaganda, destructive for journalism. By repeating the same thing a hundred times and in different ways, you only repel, not capture.

In our country, journalism is lost to propaganda. Moreover, it was first of all noticed in the case of mass media working in Kocharyan’s favor, as there are many of them.

To be honest, fake polls and media manipulations also show that a political force does not recognize the people and does not hide its condescending attitude towards the audience/voter. And it is easier for them not to order a real poll, but to draw what the heart wants.

And the ruling political force, due to which the elections took place, got the majority of votes and a second chance to replace the factor of fear with solid cooperation.

In fact, time is the most feared factor now. Including understanding how the votes were formed. No one is given a third chance.