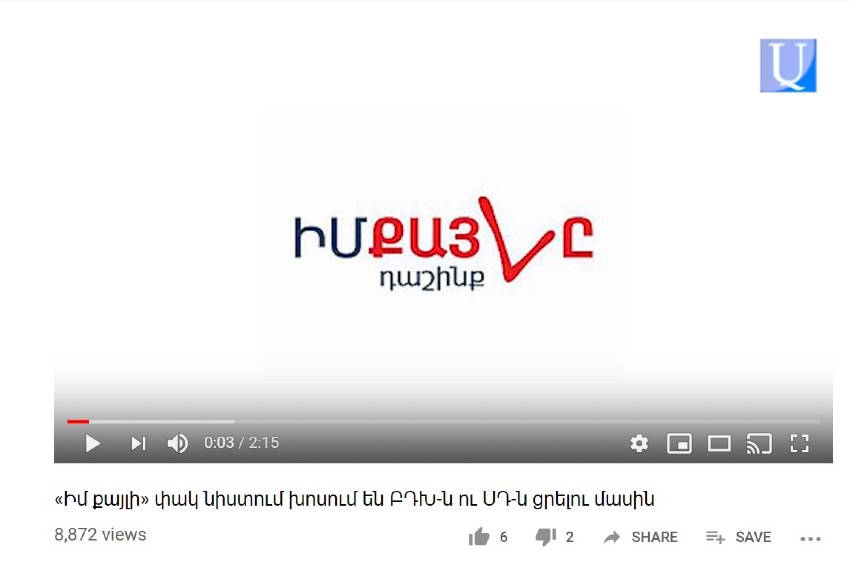 The internal closed discussions of the “My Step” parliamentary faction is becoming a topic for discussion in articles for the second time in the past week.

First of all, “Aravot” published a recording of a closed session of the faction held on May 21 in the NA corridor. Now, Factor has also written that “My Step” has discussed the issue of turning to the National Security Service (NSS) for the purpose of revealing the sources of journalists and limiting the access of journalists in hall 334.

It is clear from the article by Factor that the proposal to appeal to the National Security Service was made by the deputy of “My Step,” Alexander Avetisyan. Commenting on his proposal, he said that “the NSS should deal with more important things” and “the issue of leakage is often inflated.”

However, the MP did not deny that the intention was to appeal to the NSS to discover the sources of the leaks of their faction during internal debates, they are not publicized and are only internal conversations. He also added that “at this point, there is no need for the NSS to deal with this issue.”

Actually, Avetisyan, though he suggested such an idea, does not think the NSS must deal with the leaks from the My Step faction.

Gayane Abrahamyan, a member of the My Step faction, presented another justification for appealing to the NSS. She said that mentioning the name of the NSS at the inner session of a faction is not related to the disclosure of journalists’ sources.

“There are certain doubts that our e-mails have been hacked and that’s how things are being leaked. And that was done a while ago. I assume that appealing to the NSS to uncover the issue was talked about. Otherwise, I cannot imagine what the NSS should do about journalists.”

If we summarize this part of Factor’s information, it turns out:

A. One member of the My Step faction discussed the possibility of appealing to the National Security Service (NSS) to find out the source of the leak.

B. The discussion had nothing to do with forcing journalists to disclose their sources.

C. The discussion could have been connected to the breaking into e-mail addresses of MPs, i.e. cybercrime.

By the way, maybe, in that case, we should consider the police and not placing the issue into the hands of the NSS.

D. The author of the proposal does not insist that appealing to the NSS is a necessity.

The thesis for appealing to the NSS in the Factor article is an emphasized piece of the title. Anna Israelyan, the editor of the online newspaper Aravot, has emphasized that in her article.

However, the main part of the article is about the proposal to ensure the confidentiality of the My Step closed sessions in the NA’s hall 334.

As of May 21, the 88-member My Step MPs used loudspeakers and their voices were heard by the journalists waiting in the lobby for the session to end.

Journalists recorded about two minutes of the meeting, which lasted about three hours, and wrote an article based on those two minutes. Then when Lilit Makunts, head of the My Step faction, described the article as misinformation, Aravot also published the 2-minute recording of the 3-hour session.

The editor of the website which published the audio recording wrote that after their release, the My Step faction had to act. “It seems that after the My Step members had to make organizational conclusions and say, they would no longer have speeches using loudspeakers during closed sessions, or they would no longer hold those sessions in parliament. But instead, there are publications that they are trying to mix the NSS into this story…”

The comments of the members of the My Step faction are that talk about the NSS are not related to the voices heard from the hall outside of hall 334. There is no opinion that the NSS should be dealing with that issue.

There is a suggestion with regard to 334 that during closed sessions journalists need to be at a distance from the hall so that technically it would be impossible to hear and record the internal debates of the faction.

The editor of the website which published the recordings wrote about this problem. “The faction had apparently insufficiently taken measures at its May 21 session, and their speeches with loudspeakers were heard by the journalists outside of the room.”

The media outlets, publishing the words heard in the hall from a closed session could not have thought that My Step wouldn’t eventually have to think about bringing the internal debate to the public. As to what path they choose, it’s up to them.

For example, the faction might try not using loudspeakers or might have meetings in another building. IT would be technically difficult to limit the mobility of journalists in certain parts of the NA building for a certain period of time.

However, let’s go back to the recording done by Aravot, which has become a reason to discuss the sessions in room 334. There are questions.

First, were the recordings secret or not?

I do not know how many journalists there were at that time in the hallway, but (if I am not mistaken) 3 media outlets wrote articles about the contents of the 2-minute recording from a 3-hour session.

Journalists knew that the faction’s session was not for coverage, but the discussions in room 334 were heard in the hallway. Journalists and their editors had decided if they were heard, then they are already public.

NA MPs who speak in those records did not know that they were being recorded. Whatever was published was, in any case, for the ears of the members of their faction and not the public.

The recording is not intentionally done in secret, but it publicizes a part of a closed discussion. In addition, a very short part, from which the whole picture is unclear.

Who prevented the journalists from approaching the MPS in order to deepen the topic in the corridor and try to get comments from the Minister of Justice in order to clarify the information?

Second, what public interest does the recording serve?

According to the editor of the online Aravot, “this is not a wiretapped conversation, but it concerns a public issue of interest, the dissolution of the Constitutional Court and the Supreme Judicial Council.”

Aravot has joined the Code of Ethics of Armenian Media and Journalists, in which point 2.3 states, “Avoid hidden and clandestine.methods of information acquisition, except where traditional open methods do not ensure the receipt of information of public interest. The need for such methods should be presented and substantiated in the original publication.”

If the recording published by Aravot is not a secret, then is it clandestine? And what’s the difference?

And if it is not a secret, and not clandestine, then what is it? Public?

The term “public interest” is used in the Code, Anna Israelyan uses the phrase “an issue which represents the public interest.” It is at least a more mild way of saying what is in the Code, which the editor of Aravot also referred to.

Here, of course, there is also a delicacy. The Code requires that the disclosure of information received by secret or clandestine methods be made publically necessary by the use of those methods. There is no such explanation in Aravot’s article.

What did we learn from the recording?

A. One of the My Step MPs once told the Minister of Justice that the Constitutional Court and the High Court Council should be dispersed.

B. Another member of the My Step is angry with the Minister of Justice.

And that’s all. What is the public interest of the things said by these two MPs? Is it that there is an opinion in My Step that the CC and the HCC should disperse or that one MP is dissatisfied with the Minister of Justice?

Yes, we also learned that My Step faction leader, Lilit Makunts, unsuccessfully denied the articles. This post on her Facebook page, “Officially, I deny that during the meeting of the faction that there was a discussion about the dissolution of the HCC or the CC bodies. It is a perfect slander. I urge you not to spread misinformation,” is, of course, vulnerable.

In fact, there was a conversation about the dispersal of the HCC or CC structures, if one MP spoke about it. But was the dispersal of these organizations on the session agenda? Do the journalists who published articles based on the audio know the answer to that question? Makunts could simply have been more careful in constructing her remarks and comments in a way that did not involve a senseless conflict with journalists.

A 2-minute recording of a 3-hour discussion is not a huge about of capital to protect public interest. It is enough to write a quick article on the subject matter of the Constitutional Court and the High Court Council. But it definitely doesn’t advocate public interest.