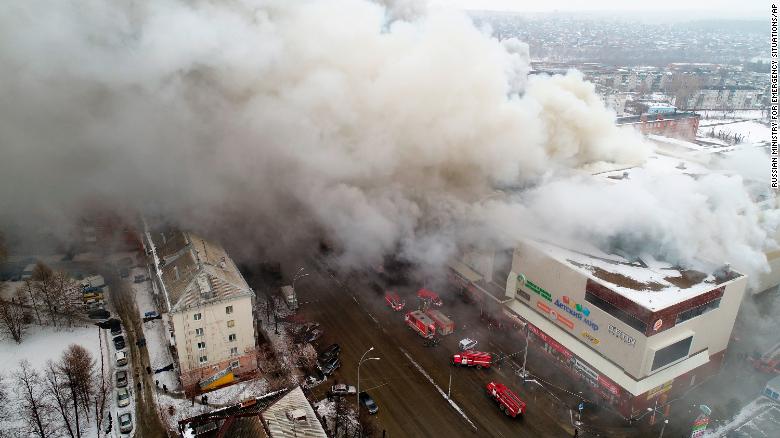 The fire which took place at the shopping center in Kemerovo, Russia, which according to official records resulted in 64 deaths, most of which were children (41), was a serious trial both for the authorities and for the public.

The problem is, that the children died, not from the fire, but choked from the smoke, from not having the opportunity to leave the halls. The process of evacuating people and extinguishing the fire was not organized well, due to the failure of the security system and violations of the fire services fast response protocol.

This tragedy also outlined another horrible reality, that no one can be trusted, nothing can be checked, because officials, witnesses and deceptive professionals can easily lie, conceal and distort the facts.

The fact that no one can explain details about the situation or the deaths of those watching cartoons or playing at the Winter Cherries play center for already a few days is no less terrible than the actual disaster itself.

The media was searching for sources, and the official and professional sources were busy trying to save their own face.

And that defines societies which are built on a vertical power rod, where officers (from firefighters to the president) losing their way in the face of human tragedy, start using popular propaganda tricks.

For example, trying to find someone to blame outside of the government-administrative system.

A method for the authorities to protect themselves, is to immediately start calling those who ask questions and reporting on the situation (and not just journalists) provocateurs. The same way that the deputy governor of Kemerovo accused a father who had lost his entire family to the fire of “pulling a PR stunt out of pain.”

Later, the deputy governor said that it was a “planned action aimed at discrediting the authorities,” and governor Aman Tuleyev said  in a special statement said that “some forces are purposefully pitching people against each other,” and “destabilizing the situation in the region.”

The fire and deaths had already created an unstable and complex psychological situation, and the simple human ability to express compassion and pain using the right words would suddenly become subordinate to the propaganda tricks of finding the enemies.

The country is fighting against external enemies, but it turns out that the children died inside their own country. Propaganda is also inclined to explain this using enemies. It suggests “assigning” such enemies.

The well-known propagandist of the station, Russia, Vladimir Solovyov, for example, described the Kemerovo tragedy as “premeditated mass murder.”

Words of compassion were expressed to Vladimir Putin. Member of Parliament, Yelena Mizulina, for example, expressed her condolences to leader, president Vladimir Vladimirovich Putin, for whom “these events were a blow to the back, and have caused a terrible shock.”

The Member of Parliament said that since Putin is struggling against external enemies, “by implementing reforms with incredible force”and he is being attacked from behind. And so, it is necessary to support Putin and wish him strength.

The conclusion is as follows: Do not discuss the events, do not let yourself become influenced by provocation and other “abominable things,” unite around Putin.

And the very first defensive reaction of the authorities is of course, attempts to control information.

Attempt to close off information

When administrative and government structures silently admit, that there is no trust towards them, they immediately try to prevent spreading of information by individuals, which theoretically may raise questions. Naturally, undesirable questions.

Immediately the following day after the disaster of Kemerovo, police began to collect cameras and phones from residents living near the shopping center.

They then demanded that the relatives of the killed children sign a document about not publishing or disseminating information.

There was even a case, when all the photos of one woman’s grandchildren had been deleted from her phone.

On the first day of the tragedy, March 25, it was a Sunday, and many Russian television channels ignored the fire and the news of the deaths, and barely changed the course of their broadcast.

Then the standard of transferring information was put to work. Power structures and special services are the first to get the word out, then officials who talk about the victims and the creation of a special commission.

This is not accidental. Official propaganda vocabulary is not able to convey human tragedy, even if it really wants to.  This vocabulary is for reports only.

In this case, news becomes reports for the authorities, rather than an expression of respect, pain and compassion, which is something that a society which has passed through disaster definitely needs.

And perhaps that is all it needs, when it is lost, misunderstood and not understanding after having lost relatives. But they demand that they keep silent, and not to speak to or be videotaped by journalists.

And the search for enemies (terrorists, destabilizers, backstabbers etc.),  hiding information, and speaking in a bureaucratic language all suggests that the society and the authorities are on different planets.