City Was Up Early, But Media Was a Little Late 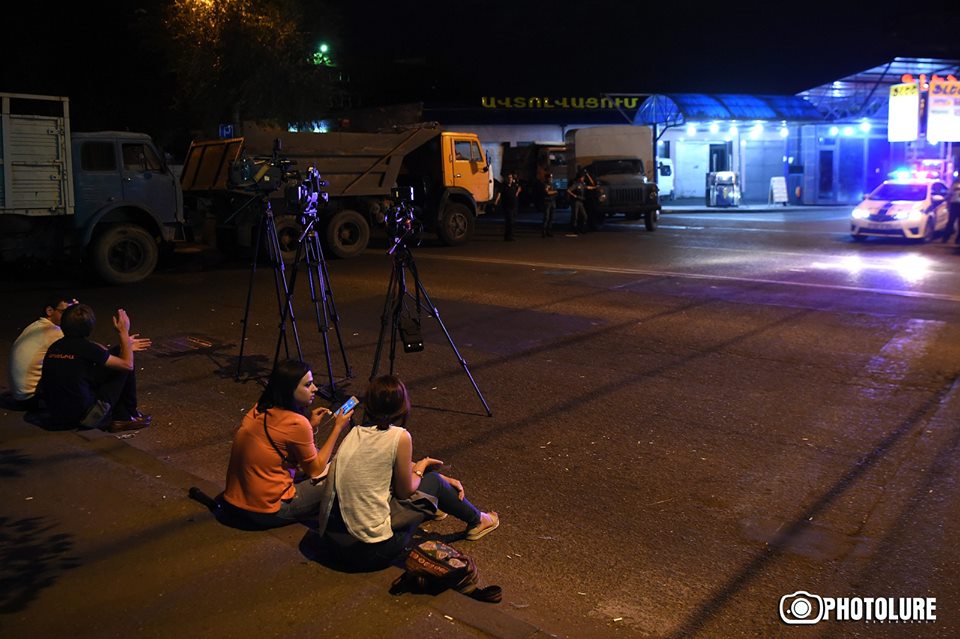 TV stations “woke up” the latest

During the Communists’ time, the news wasn’t news. But the advantage was that people were used to the system of conventions, and for example, if television began to suddenly play symphonic music, people knew that something out of the ordinary had happened. In our times, we consider that there are no conventions, and if something unusual happened, we would first surf the local TV channels (don’t say it’s the internet era; witness the public polls conducted after the four-day war in April this year).

Armenian television coverage of the early morning July 17 armed attack and hostage takeover of a police station in the Yerevan district of Erebuni began about eight hours after the incident. It’s understandable: it was a Sunday, it’s summer, we all wake up late on days like this, sometimes we’re not in Yerevan, and television airwaves are more complex… If that’s so, thenhow did TV and radio companies succeed in being organized so quickly the night of April 1–2, when heavy fighting had occurred at the border?

Even by the afternoon of July 17, cartoons, soap operas and concert performances were still being aired on Armenian television. Shant TV was the first to break the media silence with a special broadcast at 1:45 pm; 15 minutes later, it was joined by Armenia TV and h2, and half an hour later, also by Yerkir Media. Unlike the other TV stations, Yerkir Media, in any case, had begun to cover the breaking news much earlier, and entered the airwaves with its own, first-hand information. The rest were more cautious: offering purely official information, while online media had long ago disseminated the statements offered as news received “shortly before.”

In the early dawn, numerous military police vehicles with their sirens blaring regularly sped along particular streets of the capital (including its center, Kentron). Though symphonic music is more pleasant to the public’s ear, approximately until 9 am in many parts of the city residents received news only on the principle of convention — from the sound of the police vehicles. Something bad is happening.

From dawn, I began to rummage through the relevant state agencies’ online news. The last news on the police’s official website was from the day before, with the admonishment to wear seatbelts, which after the afternoon of July 18 is still the latest news on the site. It’s the same on the defense ministry’s official website. The last news on the president’s website, until the evening of July 17, was likewise from the day before, about the president going to visit Karabakh. Old news were also on the National Security Service website, until the hours prior to noon, after which this agency began to upload statements, though not frequently.

The first information about the incident was disseminated by online news sites, mainly those of newspapers.

Compared to TV and radio, they “awoke” much earlier: 3–4 hours after the incident. Though the first news they spread were the armed groups statements in full.

There’s always this problem in Armenian media’s daily newsfeed: to disseminate official press releases and various groups’ statements verbatim and not prepare professional news stories from them. The first consequence is that you are acting not as a media outlet, but your media outlet becomes identified with those who wrote the text.

It wasn’t yet 10 am, when the information vacuum was reinforced with the temporary shutdown of Facebook.

The leaders in live broadcasting were Azatutyun and A1+

The first to offer live broadcasting was Azatutyun [RFE/RL’s Armenian service] and with several working online website, as well as A1+ who followed them, began to some extent meet at least the online audience’s information news demand.

There are always shortcomings during coverage of developing events. And any media outlet in its daily work does something akin to working out — unwittingly preparing to become very quickly organized during breaking news events.

But minor flaws that it could also not have, Azatutyun had. The correspondent and camera operator reporting from the Sari Tagh bridge, of course, during difficult moments left a good impression of working correctly, fulfilling their professional duties as much as possible till the end (when police officials were urging to leave the roof of the building). But during the day, the long “silences” during the live broadcasting, with the mundane speech and conversation of those gathered, I think wasn’t quite the result of organized work (there were no captions in the livestream videos that what is depicted is no longer live and when it happened).

The work of the newsroom supporting those working at the scene, which should’ve prepared background, and old but important information related to the topic for its colleagues working on air, wasn’t seen.

A news camera is neither a “bug” [covert listening device] nor a security camera: if nothing happens, the broadcast can be shut off and any significant story about the event can be repeated, being ready to go live in case of any development.

Regular mistakes, such as exist in everyday broadcasting

Working from the principle of “if I know, then everyone knows” is not right for a journalist and media outlet. On July 17, during those hours when there were practically no actual developments, it wouldn’t hurt to tell the public who carried out the armed attack and so on. I’m not saying glorify or, the opposite, demolish them. There are so many confirmed facts in their biographies with which you could easily fill the announcer pauses in the live broadcasting, and, on the other hand, inform the audience.

I heard an example of “if I know, then everyone knows” in a live reportage from Yerevan’s Liberty Square. The reporter was saying what was done to Andreas Ghukasyan and Shahen Harutyunyan. But who are they? I, the most informed consumer, didn’t know — shouldn’t it have been said in two words who they were?

Another repeated linguistic/semantic mistake: a captive is not a hostage, and a hostage is not a captive.