The Future of Armenia’s Newspapers: Enlargement or Museum? 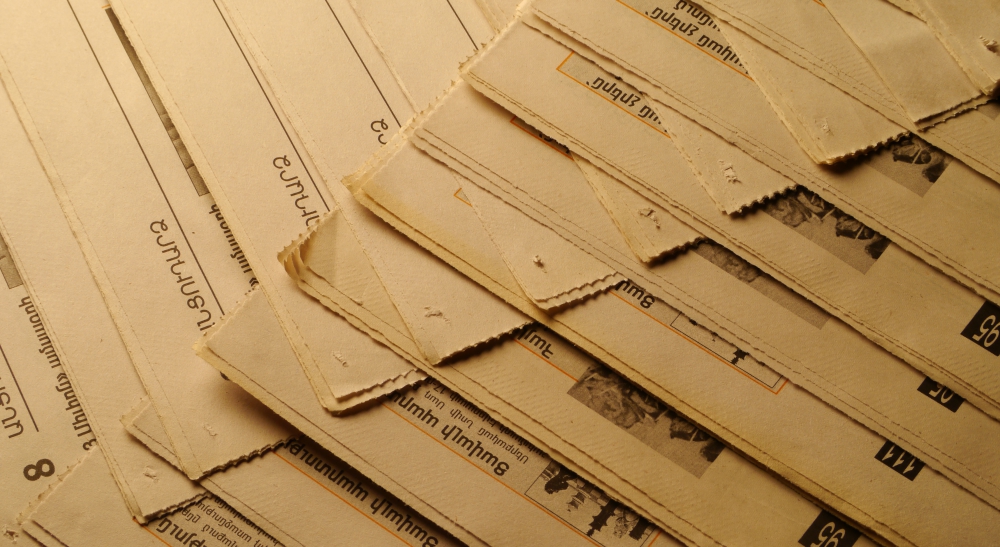 There was no need to go visit editors one-by-one to understand that the main reason for the humbling of Armenia’s newspapers is financial. However. From those conversations it became clear that the “there’s no money” of civilized countries and of Armenia today are basically different things when you specify from where there isn’t the expected money.

Our “money” and their “money”

The financial sources of print papers in Armenia and elsewhere have “slimmed” because the free-of-charge online media has great potential to wrest readers from paid newspapers.

But when in the West they say there’s no money, they first of all mean that people have started not to buy their newspaper or buy it less often (and the smaller the circulation, the lower the cost of advertising, though a print ad is considered more lasting and influential). But when in Armenia they say there’s no money, they more so understand that there’s no one to give money to the paper — because maintaining a newspaper at the expense of readers and advertising has long become hopeless and inconceivable in Armenia.

Only Haykakan Zhamanak considers it possible under these conditions, to whom, by the way, having its own print shop helps (though this year it was forced to double the paper’s sale price). 168 Zham‘s online version supports the print paper, while in the case of Aravot, it’s the opposite: the print version brings in most of the revenue. Hraparak‘s print version also brings in a certain amount of revenue.

The idea of crowdfunding (when the paper asks its readers for financial donations) the newspaper editors currently only scrutinize, understanding quite well that this method might not work in Armenia.

The cost price of a newspaper is quite high in Armenia, especially because of the cost of importing paper when two out of the country’s four borders are closed. And the print runs are so small that “[With this circulation of 650 w]e’re currently not self-sustainable; in our case, that will be by printing at least 900–1,000 copies [per issue].” (Asparez)

The 11 public and political newspapers with national distribution whose editors spoke with Media.am combined publish 32,000 copies (excluding the free-of-charge Champord weekly): the lowest, 650 copies; the highest, 7000.

But some consider their small circulation normal. “The amount of newspapers sold in Armenia compared to the population is not at all a bad indicator.” (Haykakan Zhamanak)

In any case, the circulation of those 11 newspapers combined doesn’t reach the circulation of even one leading Armenian newspaper in the early 90s (Azg, Yerkir). Though the energy crisis of that period in some sense created “golden conditions” for the sale of print publications: because of the constant power outages, competitors television and radio weren’t always accessible.

For whom are newspapers printed?

After removing the differences from all the editors’ responses to this question, two things remain: the older generation and a political-official elite — a view “toward the top”.

And from the newspaper’s “upwards” gaze come all the political-financial causes and their consequences. Television news programs in Armenia also look up to the political elite, though soap operas and other mass entertainment programs greatly help them keep their audiences.

Funders: Behind the scenes

It’s probably as a result of an unprofitable life with small circulation that newspaper editors are forced to rely on financial sponsors, but they’re not inclined to give their names. “No newspaper editor will tell you that. The reason is it’s a commercial secret” (Iravunk). They mainly explain it like this: those funds are simply to cover daily expenses so the paper doesn’t shut down, but the papers do everything to be impartial and pluralistic.

This also means one thing: lazy competition or the lack of it. “[N]one of our newspapers in Armenia are competing with the other, and such a thing can’t even happen” (Golos Armenii).

But competition is the best incentive for sound business, though other rules of business operate in Armenia.

Other rules of the game

If newspapers tried to operate in Armenia according to rules of sound business, many would go bankrupt and fold. “All would’ve gone bankrupt. Not a ‘great many,’ but all” (Aravot). Aren’t there any newspapers in Armenia that run a healthy business? “Not that I know of” (Azg).

But even if the “other rules of the game” aren’t to the liking of some, all the same, many editors have understood that the ship to maintain a newspaper in Armenia at readers’ expense has sailed. While the rules of Armenia’s business-game require you either to play like this or get out of the game. “It pains me, yes. But I think that, nevertheless, even within these rules of the game, it’s better to say something than say nothing” (Aravot).

There are also irregularities in the financial relationship with newspaper-distributing print shops, but they’re resolved unofficially, and no editor wants to talk about them — not even off the record. There’s no uproar and no lawsuits. And it’s not always that the newspaper owes; sometimes it is the one who is owed, but sitting quietly, it waits.

The editors voiced one complaint about newspaper distribution: the distributors mainly don’t have a stake in selling more copies. On the other hand, “Our citizens are very conservative: we tried to sell [the paper] in stores and at gas stations, also other, alternative options — it didn’t work. People are used to buying newspapers from kiosks” (Iravunk).

Advertising is not the newspaper’s “bread and butter”

The price of an ad on 168 Zham‘s online version is higher than in its print version. In the case of the others, it’s the opposite: “As for why, you have to ask the advertisers. It’s not only local [political] figures who want to disseminate their portrait in print. Major international brands operating in Armenia also prefer advertising in the paper” (Aravot). “Do we [even] get advertising to carry it? Very rarely do we get advertising” (Sevan). “[D]o we have an advertising market? That which is called an advertising market in Armenia is in a disgraceful state. If this wasn’t so, very many of our few dozen TV stations would no longer exist” (Azg).

According to the editors of Asparez, Chorrord Ishkhanutyun, and Zhoghovurd, placing an ad in an “unpleasant” newspaper might harm a businessman advertiser.

If the authorities don’t want, such-and-such newspaper won’t be printed

In independent Armenia’s almost 25-year history, most of the attacks have been on newspaper staff and editorial boards. And the most — in the 90s. Perhaps the reason is that the newspaper was the most influential and could be more free. However. The assaults and shutting down the paper were met with resistance, and the public stood by free speech.

Now the only “assault” against newspapers is financial and invisible, and, in the opinion of some editors, more effective for government control.

Color printing will greatly increase a newspaper’s expenses; editors also consider risky the attempt to add other alluring design elements and unanimously speak only about the possibility of increasing the quality of the content.

In the mid-90s, when there was news that a new newspaper was coming together in Armenia, one of my friends who knows the media well said, you see how smart they are? They’re gathering well-known journalists. Indeed, that paper entered the field with quite a momentum and immediately occupied a leading position.

That paper would remain leading, if it wasn’t for the internet. In this sense, a “bitter” joke can be made that Armentel’s monopoly, no matter how adverse, postponed the collapse of Armenia’s print media (if print media began to recede in the world in the mid-90s, making way en masse for the internet, well in Armenia this process began in the mid-2000s).

And some of those “well-known journalists” gradually left print media. The reasons may be different: the main reason, perhaps, is financial, though some of the editors deny this. “No, it’s not true that there’s an expensive and high-quality workforce that you can hire but you don’t. There’s no such thing. I try as much as possible to bring in new people. And I quiver for what we have. But, all the same, the journalism sector is not stable, it’s not established, it’s quite fluid” (Hraparak). “I have a reporter that freelances for us and other, sometimes 7 media outlets, getting a very small honorarium from each place” (Asparez).

It’s as though Armenia’s print media feels itself to be temporary, investments for development doomed from the start, and addresses only the problem of survival. But why do they want to survive at all cost? After all, all the 12 newspapers whose editors Media.am spoke with also have online versions.

So why don’t they shut down the print version of the paper?

“If we exhibit a market approach, no, it’s not worth printing a newspaper for 700–800 people. But shutting down a paper is difficult — it’s like stabbing yourself” (Azg). “The newspaper brings in the majority of Aravot‘s revenue. And that’s why it won’t be shut down.” “[T]he newspaper has such a reputation that it brings us some revenue” (Hraparak).

Only one thing has to be added to all this: as long as there are newspaper consumers. Meanwhile, the older generation’s readers are not immortal.

Perhaps consolidation, enlargement will save print newspapers in Armenia. Or at least the consolidation of those newspapers that are in the same field. This will also resolve the matters of the very small audience, funding, and newspapers dividing up advertisers among themselves. Some technical expenses will be cut.

Consolidation will centralize also journalistic resources: a wage increase will also foster the quality of journalism (everywhere it is considered that newspaper journalists are the most prepared). This will bring the sort of content that doesn’t exist in any other news media platform. Otherwise, why should someone pay and buy a newspaper if they will find the same thing for free online?

Though the consolidation of even two newspapers in Armenia seems extremely unlikely; a much more difficult thing than even raising funds for a newspaper.

So, the newspapers I collected for months for The Future of Armenia’s Newspapers interview series I will carefully shelve and keep in the archives. If nothing is done and print papers abide by this philosophy of survival, at the very least after 10 years the stack I have collected will be of museum value.

To read the individual interviews of The Future of Armenia’s Newspapers series, click on the respective newspaper’s name below.