The Mysteries of Armenian Media: Amnesia 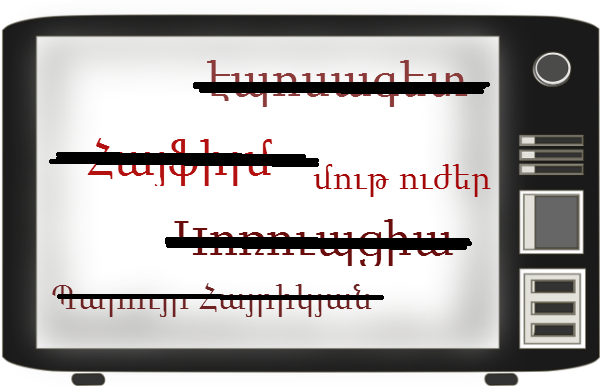 Sensationalist, scandalous, thrilling, and controversial news are a journalist’s dream. Or at least they should be.

The stories woven around celebrities, the hunt for famous people with which the relentless paparazzi is engaged, are called to quench the thirst for sensationalism that is typical of information societies.

(By the way, “paparazzi”is plural; the singular, “paparazzo,” in Italian means “buzzing” — it’s obvious why. The feminine version of the noun is not “mamarazzi” as might be surmised, but “paparazza”: it became a common name “in honor of” the news photographer named Paparazzo in Federico Fellini’s La Dolce Vita.)

Sensational news related to foreign celebrities also occupy a considerable place in Armenian media: probably our “stars” are not exciting or interesting enough, but Armenia has no shortage of different, particularly political in nature scandals.

A referendum on constitutional amendments will be held in December, but the local media hasn’t yet resolved the main outstanding issue of the previous nationwide referendum, that is, the presidential election.

I’m referring to self-proclaimed epic poetry expert Vardan Sedrakyan. Two years ago around this time in October, he was sentenced to 14 years in prison, but is there anyone in Armenia who can identify his motive for attempting to assassinate presidential candidate Paruyr Hayrikyan?

It’s a mystery that an interesting story such as this was consigned to oblivion immediately after the end of the trial; meanwhile, apparently there were threads that were carried out of Armenia: that is, journalists could’ve uncovered an international scandal…

The Armenian government at the end of August this year approved the bill to return the Armenfilm (a.k.a. Hayfilm) film studio valued at over 2 billion 700 million AMD (about $5.7 million USD) to the state.

According to Armenpress, the government (that is, the budget, us taxpayers) also has to remunerate shareholders “the amount initially invested in the company by the shareholders of Hayfilm.”

What happened to the pompous promises [AM] of having high-quality film production at the regional level? “Investor Cafesjian [Familiy] Foundation aims to transform Armenfilm, turning it into a modern film studio. According to Gevorg Gevorgyan, ‘no building will be demolished, only new ones will be built; and existing ones will be repaired so that they correspond to international standards’.”

My intention is not to discredit the Cafesjian Family Foundation, which has earned a good reputation in Armenia: The Cascade complex alone, the high quality collection of sculptures are enough for Yerevan to be grateful to Gerard Cafesjian, but didn’t individual people, the owners of Armenia TV during those years, get rich from this transaction of only fulfilling the obligation of digitizing Armenian films with a relatively small investment? The digitized films were shown on this channel.

Who is the main party responsible for this disgraceful transaction — then prime minister Andranik Margaryan? The Minister of Culture?

What constitutional amendments need to be made for the guilty to be punished or at least someone to apologize to the dozens of professionals who were dismissed instead of using and developing their knowledge experience?

Who should apologize to the citizens of Armenia for yet another investment vacuum?

I consider also the topic of state officials’ incomes as another victim of the Armenian media’s “amnesia.” It’s true, Hetq, Haykakan Zhamanak, Lragir, and other news websites and newspapers regularly cover the flagrant discrepancy between the huge sums of money on their declaration forms and their modest salaries, but what comes of it? Practically nothing: the same officials, with the government as its servant and a law enforcement system likewise involved in scandal, ignore these reports.

This doesn’t mean, however, that the media, the aforementioned websites and newspapers should despair. It means they have to be more persistent and consistent, since they’re forced also to make up for Armenian TV channels’ state-sponsored blindness toward the ruling authorities’ unlawful acts.