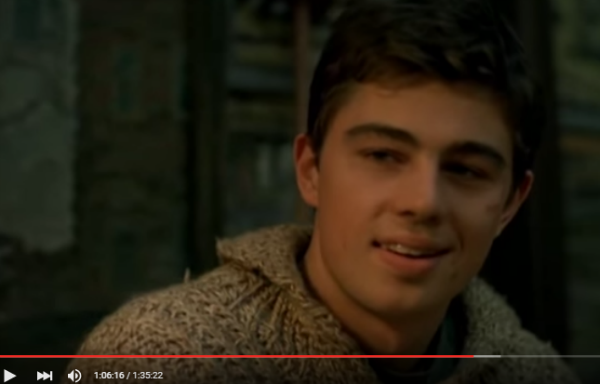 Aleksei Balabanov (1959–2013) was a talented filmmaker. His Gruz 200 (“Cargo 200,” 2007) is one of the best examples of “brutal realism,” an exceptional film, which depicts the atmosphere in the USSR and the manners of the Soviet army during the invasion of Afghanistan and 10-year war (1979–1989). The Soviet leadership concealed the war from its own people, while Soviet soldiers killed in the war were shipped home in zinc coffins referred to as “cargo 200”.

Brat was also a superb film, which is the main reason for this piece.

The film’s main character, Danila Bagrov, returning from the army, travels to St. Petersburg to see his brother Viktor, who is a hitman. Viktor passes his killing jobs to his brother, paying him 1/10th of what he makes, and Danila easily agrees.

Despite the fact that the brothers are murderers, people in Russia worship Brat. Danila is righteous and in many situations defends the weak.

In one of the first such scenes, two unshaven Armenian men first try to pick up a girl in a tram then refuse to pay the Russian conductor. Danila saves the latter by threatening the Armenians with a gun. One of them immediately begins to cringe, offers his wallet and says, brother, don’t kill me. Danila who dutifully purchased a ticket though he has a shortage of money (in the previous scene, he couldn’t buy his favorite band’s CD from the music store), takes only the amount for the fine.

Foreigners in the film include a good-natured Central Asian watermelon vendor, a French tourist, a German man, and Chechens.

Chechens are “simply” opponents, according to the main character’s attitude toward them: they fight the Russians in their territory and in Russia’s main cities — to reign over lucrative businesses.

The German man, Hoffman, is homeless: “You’re not a Jew… a German is normal,” the main character opines. He helps the German man, who later helps him.

The French man is at a party:

Danila: Soon your America will hit the mark.

Girl: What do you want from him? He’s French.

Danila: So, what difference does it make?

While to an Armenian man‘s plea not to kill him he says:

This collection is the perfect depiction of Russian mass psychology today, which the late Balabanov “prophetically” predicted or planned. And so:

We reckon with Chechens: either we’ll kill them or they’ll kill us.

Central Asians are second-class citizens but “inoffensive” — let them serve us.

Germans are better than Jews, since they fought for the purity of their race (as did the Turks, perhaps), while Jews are insidious.

The French, the Americans…people from developed countries think highly of themselves, but their end will come soon — by way of the Russians.

Armenians call you “brother” but have their eyes on Russian women. They’re impudent and must be kept in fear of the gun.

At the end of the film, Viktor ensnares Danila, for the rival gang to kill him and so he can save his skin, but Danila forgives him because he’s his half-brother.

These fascist messages are completely dear to the titular nation of Putin’s Russia today: it’s enough to read the impressions of the more than 4 million viewers on YouTube [RU] alone.

The only thing unclear is why Armenian TV channels show Brat… or, what do Armenians like about the film?

Likewise, why do they show the anti-Armenian film Le Premier Cercle (“The First Circle,” 2009) with actor Jean Reno and the TV mini-series Brigada with its dubious pretext, whose Armenian producer Aleksandr Akopov in private conversation expressed regret that he aided in the development of mob psychology in Russia?

To be more precise (so that in my naivety I’m not viewed an enemy to the free dissemination of art), before such shows are aired on television there should be either a warning that the film propagates fascist ideas or opening remarks that will explain: it’s not always that artistic merit serves humanitarian values.

* Some people in Russia call Armenians “black,” a derogatory term referring to their darker skin color.