Fatih Akin Wants “The Cut” to Prompt Audiences to Get Informed, Know Their History 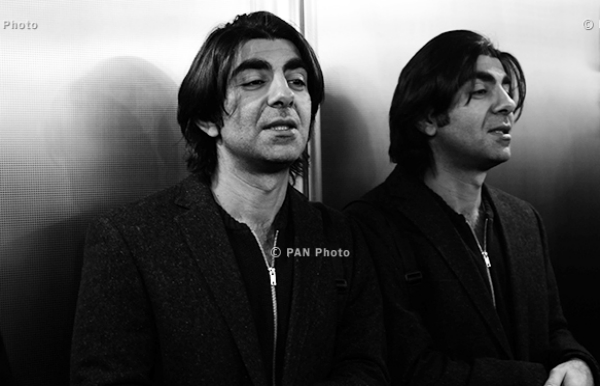 German filmmaker Fatih Akin screened his latest film, The Cut, in Yerevan for a private audience.

Journalists, the president of Armenia and his guests were the first to see the film. And naturally, a film on the topic of the Armenian Genocide by a filmmaker of Turkish descent was widely covered by the local media.

The primary issue wasn’t the film itself but the fact that a European filmmaker with Turkish roots dared and wanted (and also found the finances) to tell a story related to the painful Armenian-Turkish past.

Film plays an important role in the series of events devoted to the 100th anniversary of the Armenian Genocide. And a successful and smart filmmaker such as Akin was a welcome conversation partner, since, as he confesses, he looks at Turkey as an outsider and is not guided by his roots.

Now, when he’s produced a film about the Armenian tragedy, Armenia’s media is expecting more specific (pro-Armenian and critical of the Turkish approach) remarks from him.

The Cut was an opportunity for Akin to speak about the importance of freedom of speech while for the majority of Armenian media, about the pressure on free speech in Turkey.

Akin was ready for a wider discussion, but the centennial of the Armenian Genocide placed him in a constrained position: news outlets wanted to hear only about Turkey’s problems.

“I think, freedom of speech is a fragile gift that’s bestowed upon us and which we as a civilization must defend every day. The fight for the freedom of speech is taking place around the world. See what’s happening these days in France,” he said following the film’s premier.

Akin said he was in Paris during the attack on Charlie Hebdo, citing this incident as an example of the daily struggle for freedom of speech.

The main questions that journalists in Armenia asked Akin were tied to Turkey’s bans and the threats against the filmmaker. Akin diplomatically replied that his film is an impetus for doing his own research.

I hope the film will lead to a desire especially for youth to do their own research and study the history, he said, mentioning that he closely followed the discussions on social media. “It was important that young people were sharing their impressions and questions on Facebook and Twitter, and the majority confessed that it knows nothing about the Armenian Genocide. I want people after leaving the movie theater to try to find information and understand what happened. This is the best result that the film could have.”

Armenia’s media wanted to hear Akin criticize Turkey, while Akin was speaking of the interests of Turkish viewers. The committee organizing events for the centennial of the Armenian Genocide, which had invited The Cut‘s creative team, published an interview on its website in which the filmmaker says that people in Turkey can see the film in theaters. “Another question is if there is enough interest. Sadly enough, those who are interested are in the minority.”

“Of course they criticized me for addressing the topic of the genocide, but at the same time remarking, ‘See, we showed the film.’ There is no real freedom of speech in my historic homeland. The majority of news outlets supports the Turkish government,” said Akin at the press conference.

Armenia’s media targeted the topic of the film The Cut and not the film itself. Of course, the fact that a filmmaker of Turkish origin dared to call the Armenian Genocide by its name and make it the axis of his film is already a major international event. But, it seems, overlooked were the important messages and thoughts directed to the world in both the film and the auteur’s remarks.

During his previous visit, Akin was more open to communication and perhaps freer in his observations. Having a good knowledge of the filmmaker’s craft, Akin spoke about [AM] the dangers of keeping the concepts “native land” and “call of blood” in narrow circles.

“I think, blood category contains elements of chauvinism. Blood is the same everywhere and differs only by group — A, B, C. When you place too much importance on your origin, you reach the edge of emptiness.”

Playing a big role in the creation of the film The Cut was Agos chief editor Hrant Dink (who was murdered in 2007), whose ideas and position, according to Akin, best express the complex picture of Armenian-Turkish relations. This picture has more layers than just uttering the word “genocide” and making common remarks. After all, freedom of speech is responsibility before the future. Fatih Akin has his sense of responsibility. And this is infinitely more interesting than what we saw in the media.