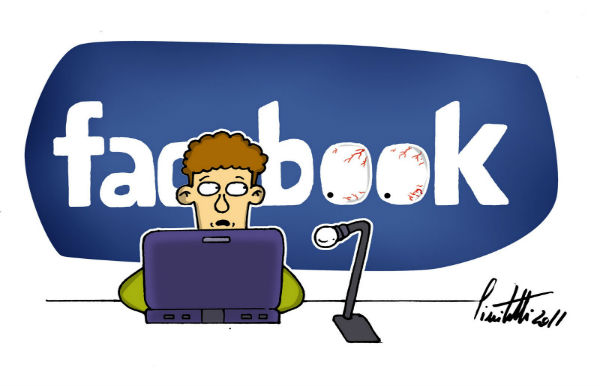 My esteemed colleague Mesrop Harutyunyan, summing up the issue of copyright concerning Facebook status updates, in 2011 wrote that if the status update is marked “public” and the author is cited, then there should be no ethical concerns.

Perhaps, but in one year, a huge “industry” has formed based on Armenian-language content on the Web, which is based exclusively on content produced by Facebook users and which uses the aforementioned justification as a trump card.

Today, hundreds of personal photos, emotional outbursts, and other posts of a personal nature posted on Facebook are removed daily from their context (from Facebook) and spread for all the world to see on the Internet. What’s important is the strict ethical tone of the gesture: a notice the author receives saying, “Your post has made its way to our publication”.

Let me say up front that I’m not preparing to be diplomatic and approach the issue “gently,” “from afar,” and “historically”, or to explain the danger of this practice. And also, if you’ll permit me, I won’t speak about the copyright of Facebook status updates. You can simply reread the aforementioned articles on the topic, and, by the way, that task is especially advised of the the top 10 websites listed in the “News and Media” category on Armenian web resources rating site Circle.am.

I write to draw your attention to this issue in terms of “vital”[1] individual rights, which, in my humble opinion, those working in the media sector are obliged to consider in order not to cause harm, and it would be good for Facebook users to know as well. I want to draw your attention also to the theoretical, potential, and actual arguments of websites exploiting Facebook users, while analyzing them. And so…

Of course, it’s a “barefoot” argument; more so for those who’ve ever come across definitions of “public” and “private” rights and civic freedoms. Even a first-year law student can manoeuvre “between the private and public” as much as you want, because the definition is insignificant; nevertheless, there is a limit[2].

If a piece of private property becomes available, either by invitation or otherwise (example, through payment), to a group, it can be considered public. That is, a private apartment, housing two or more people, can be considered a public space. And the opposite: a public space for private use can be considered a protected zone. For example, a couple can kiss in a public park and demand that the act remain private; for instance, for the couple not to appear on camera when a crew is filming in the park.

If you noticed, public and private are defined not according to space, but according to the purpose of the use of that space and the rights of the people involved; consequently, Facebook cannot be considered a definite public space, and any content published on Facebook cannot be qualified as public, regardless of attainability, the number of people who can access it, and the topic of the content.

By the way, one can come across lists of public spaces in various laws prohibiting smoking in public spaces, where considered in detail and listed are all possible “public” spaces. I’ve checked — Facebook is not on any of those lists :)))

They Say, the Content (Status Update, Photo) was Marked ‘Public’

First, content marked “public” and shared on Facebook is public for Facebook’s one billion users and not for the entire World Wide Web, where nothing is ever forgotten and often can be and is used not to the author’s benefit. For example, if a user marks a status update as “public,” on the backdrop of his friends’ activities and trends at the time, then on a self-proclaimed news site, outside of the context, this status update at the least might leave the impression of an incoherent person, if not actually harm the author, finding its way to the hands of different people years later. I won’t even speak of the consequences of political Facebook posts…

It is symptomatic that if “interested” Facebook users have a message and won’t be opposed if their post reaches a wider audience, then indifferent users, for the most part, are 20-year-old girls and boys and at a given moment are not particularly opposed if their acts at parties appear, but they would do well to learn about the case of Stacy Snyder.

Currently, employers checking employees’ Facebook profiles has become common practice, which unions condemn. But you cannot blame an employer for finding “evidence” of opinions, comments, or improper conduct among not Facebook’s one billion, but the open Internet. It’s on the World Wide Web, after all.

Finally, let me say, especially that I’m not speaking about those incidents where the author of a post has conveyed especially important information and cannot be reached though other means at that time and so on and so on. I’m speaking mainly about these posts [AM], which logic dictates, judge for yourself, is far from being in the public interest; furthermore, it establishes a dangerous discourse…

[1]Human dignity and the right to privacy are included among UNESCO’s list of vital rights. See: The Universal Declaration of Human Rights, UNESCO, 1948, and Marc Rotenberg, “Protecting Human Dignity in the Digital Age,” UNESCO Observatory on the Information Society.