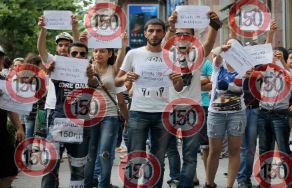 For five consecutive days, the various groups and individuals protesting against the increase in public transportation fares in Yerevan were urging passengers not to accept the controversial municipal decision to increase the fares and to continue to pay 100 AMD instead of 150 AMD.

The active citizens with varying pamphlets and posters (mainly youth) were engaging mini-bus (marshrutka) and auto-bus drivers and passengers in conversation, urging them to consider who is really gaining from the already overladen and insensible fare increase — and generally to contemplate many other pressing issues.

This “transport” wave quickly acquired features of rebellious art and played a very interesting, almost purifying role in the life of Yerevan in a summer season of indifference.

The wave of rebellion was effective, as the collective physical body, social media, and the urban environment were interlaced..

The dozens, hundreds of active citizens with the same demand taking to the streets were communicating with random passers-by, with those waiting at bus stops, in shops and cafes, and simultaneously actively disseminating in the media every new, though trivial incident.

Every incident was validated instantaneously: photographed, shot with various devices and quickly shared online. Then from the Internet it again return offline with new comments added. 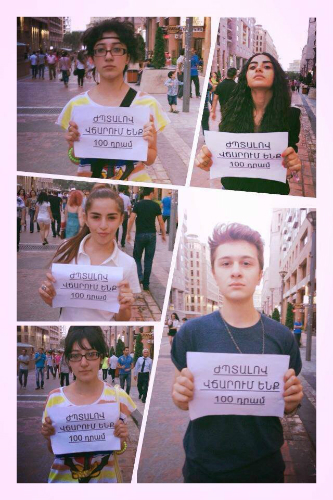 And so, created was the reciprocal circulation of the [physical] body, the media, and the street, where all three elements are important.

People united with the same concern tried to talk with the same language and images both on the streets and in the squares (with pamphlets, speeches, and unified) and on social networking sites (with “likes”, “shares”, retweeting, and using hashtags).

The “I won’t pay 150 drams” movement created a chain reaction with its positive, joyful atmosphere, its members and participants in both virtual and offline space using different creative and positively motivated messages.

Yerevan as a large media bloc was constantly broadcasting news, where what prevailed was the festive, carnival-like and nearly ritual demonstrations.

Utilized was the “happening”, performance (a cake with the image of the 50-cent coin was taken to city hall), street art (graffiti appeared on walls adjacent to bus stops and there were flash mobs in the shape of 100 drams), vehicles were decorated (cars taking passengers for free were labelled), songs and videos were produced on the topic of the day (it doesn’t matter whether they were successful or not).

These small demonstrations, seemingly shallow and casual at first glance, actually played a great role, influencing the human subconscious. The carnival, celebration, and happy lifestyle esthetic is the most successful in the struggle against upright hierarchies. And perhaps it was this creative wave that led to the mass spread of the political and civic demonstration and its successful resolution (the public transportation fares in Yerevan will not increase).

When there’s the impression that nothing can be changed and in a broad sense, there isn’t even a society capable of revolt, the playing up of details gets an unexpected strength.

Authoritarian regimes often waver and sway not on the political front, but by esthetic and joyful media tricks — and sometimes topple.

Chilean filmmaker Pablo Larraín’s 2012 film “No” is about such a creative media component. The film is about the preconditions of the 1988 fall of Chilean dictator Pinochet’s regime, the most important of which was the televised campaign coordinated by the opposition. For one month, as a counterbalance to the authoritarian regime, Chiliean opposition activists via the TV set spoke with quite indifferent and fearful citizens with the universal, optimistic language of advertising; they visualized a new Chile, emphasizing not the characters of political prisoners and the poor but on relaxing, smiling, and happy persona.

The Chilean authorities initially didn’t take this campaign with its slogan “Chile, happiness is on its way, greet it!” seriously , calling it clownish, but then it was already too late… the people, easily and comfortably, without displaying particular effort or will told the authorities “No,” since the images of a happy (not false) future were strongly embedded in their subconsciousness.

When a totalitarian regime generously and negligently allows opponents, small in number and practically deprived of governing leverage, to dance and sing (thinking, let them continue to dance, while we govern), a very odd thing happens: the dancer begins to feel that dancing is pleasant.

And why not make it so that taking public transportation, walking in the streets, and finally also protesting is pleasant?

The past two days, members of the “We won’t pay 150 drams” movement organized a sit-in in front of city hall, demanding the resignation of several of its employees (particularly those who are the providers of the routes and had made the groundless decision to raise the fare).

The municipality, aiming to peacefully freeze the protest, chose water as a creative means, making the constantly irrigated lawn inconvenient for sit-in participants. The protesting youth made counter proposals, “threatening” to use the useless and relentlessly flowing water more objectively — to clean rugs or wash wool. Then came the caricature collages, various internet memes, and so on parodying the decisions and official visual language.

And this anonymous, encompassing movement had a large number of supporters, provoking debates, reinventing, and realizing fundamental issues.

During the days of the protest, a priority for a news outlet became not merely presenting the incident, but being on the scene — in order to be able to present it later.

Often, news outlets compile the news of the day by “stealing” information from each other or getting comments by phone, but now it turned out that being present is helpful and interesting, since the city itself had become a total media platform where “digging up” information is a pleasant and happy task.