Yerevan Mayor’s “Lie”: the Internet Does Not Forget 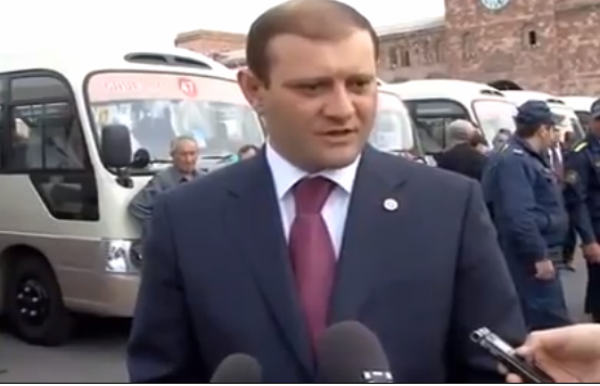 The virtual giant known as the Internet not only doesn’t recognize space, but also is not sufficiently sensitive, distinguishing the sociopolitical positions of users and acting opportunistically. The Internet’s memory is steadfast, based on its own rules of the game.

During the past few days, the number one issue of our country, the increase in public transportation fares, against which active citizens continue to struggle, once again revealed the uncontrolled nature of the spread of content online.

On Jul. 20, when the mayor’s decision to increase the fare came into force, alongside the wave of protests from the public, a few news outlets dug through the media archives and republished one of Yerevan mayor Taron Margaryan’s interviews from a few months ago, in which he insists that “Yerevan City Hall has officially declared that the fare won’t increase; our people should not be concerned, not get worried — how the fare has remained is how it will stay.”

A short while later, spurred by the speed of clicks and “shares,” the video uploaded on the Yerevan City Hall YouTube channel rekindled the already indignant public’s memory and gave new impetus to the discussions and criticism.

Taron Margaryan’s telecommunications staff attempted to put out the fire with what at first glance seemed to be quite an effective solution, by blocking public access to the video, making it private.

With that short-sighted move, the staff managing the mayor’s online presence attracted more attention to the matter and were quickly awarded the label of spreading false promises by the mayor.

Great effort wasn’t necessary to convince people or to justify the remark: in our times of technological abilities, far-sighted users don’t let go of such opportunities and, in any case, insure their views with the relevant tricks.

Some users had predicted the city hall employees’ tactics and had extracted the segment of the video where the mayor promises the fares will remain unchanged before the video was made private. This segment was quickly published by local news outlets such as iLur.am. 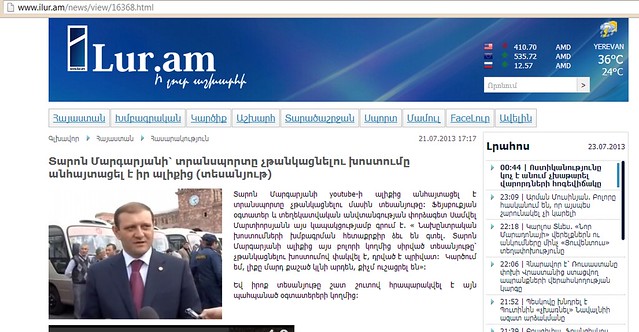 It should be noted that in such cases, as a rule, proactive users strive to give the most influential, often humorous and even mocking names to the content they publish: the video in question, for instance, was uploaded under the following headings: “In the party’s name, I’m not lying…” (as of Jul. 23, this version had 4,063 views), “Taron Liar” (6,869 views as of Jul. 23), and “Lying is not with money” [Or, “I’m not being paid to lie”] (6,408 views as of Jul. 23), among others.

The video, of course, has been shared even more so on social networking sites, especially Facebook, where it likewise has been uploaded and even appeared in a user’s personal Dropbox.

The Internet also doesn’t interfere with those who wish to remain anonymous: online tools allow anyone to hide his or her real identity; for example, one of the users of the videos mentioned above goes by the name “Pablo Taviani”.

And so, if months ago, the mayor’s staff with this video were trying to raise Taron Margaryan’s reputation (especially during the heated pre-election period of promises), well today that same video, even without a source but with no less diligence and loyal to the boomerang principle, serves to ruin the re-elected mayor’s reputation.

In addition to technological skills, the core of the issue, of course, lies in the content. Appearing in front of a camera on any occasion, we shouldn’t forget that the Internet, like a mirror’s reflection, echoes our reality and, unlike us mortals, has a bright memory that can’t be easily erased.

P.S. Considering the circumstances, the possibility of changes to the aforementioned hyperlinks is not excluded.