The Need for Evening Papers 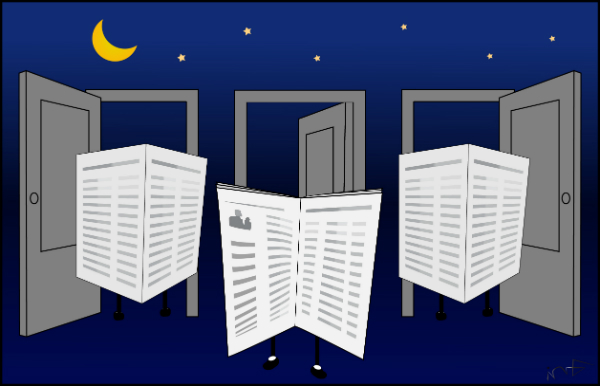 During the Soviet years, there was a daily paper called Yerekoyan Yerevan (“Evening Yerevan”), which was the organ of the Central Committee of the Communist Party of the Soviet Union. Yerekoyan Yerevan was published and sold at kiosks during evening hours when the other papers had already been sold and consumed. Though Soviet journalism wasn’t known for its urgency, news stories that didn’t make it into the morning papers could be found in Yerekoyan Yerevan. And since Yerekoyan Yerevan, compared to Khorhrdayin Hayastan (“Soviet Armenia”), was an apolitical and unpartisan paper and allocated more space to sport and culture, it enjoyed a certain level of demand among readers.

Yerekoyan Yerevan unexpectedly stood by the Karabakh Movement that began in 1988, and that was due to the paper’s last editor, Kamo Vardanyan. It was no coincidence that the late Kamo Vardanyan was elected as a board member of the Pan-Armenian National Movement (HHSh) at its first congress.

After Vardanyan and Armenia’s independence, there were a few attempts to revive Yerekoyan Yerevan, but they weren’t particularly successful, as the main guarantee of Yerekoyan Yerevan‘s success was that it corresponded to its name; that is, it was published in the evening.

Today, when daily papers surrender to online news media when it comes to speed and having the latest news, the need for an evening print paper is felt even more. I’m not saying that an evening print paper would be able to compete with news sites, but an evening daily can fill the gap left by the (morning) dailies — in terms of having the latest news. By the way, it can do this — to some extent and legally, of course — by availing of the latest news on news sites, making sure to credit the news source, as well as adding its own recent news from that morning and afternoon.

In my opinion, such an evening daily can not only become a competitor to our well-known (morning) dailies, but also seriously compete with news websites, especially if it can make a good-quality selection from those same news sites.

If my strength and capabilities allowed, I wouldn’t make such a suggestion, but rather, I myself would assume publishing such an evening paper, especially since I can imagine the expected revenue from such a daily, and I have somewhat of an idea of the difficulties of that task as well, difficulties which are mainly tied to the working hours of the newspaper kiosks in the capital, as many of them are closed after 6 pm.

If the paper I envision is sent to kiosks by 5 pm and those kiosks that close early decided to stay open till 8 or 9 pm, then this issue would no longer be an obstacle. That kiosk staff will stay till 8 or 9 pm (even at the expense of their lunch break), I am almost certain. Otherwise, the paper can be delivered by 3 pm, still with the latest news, and then we’ll have not an evening but an afternoon paper.

I understand that my proposal is from the realm of dreams, but, all the same, it’s possible.