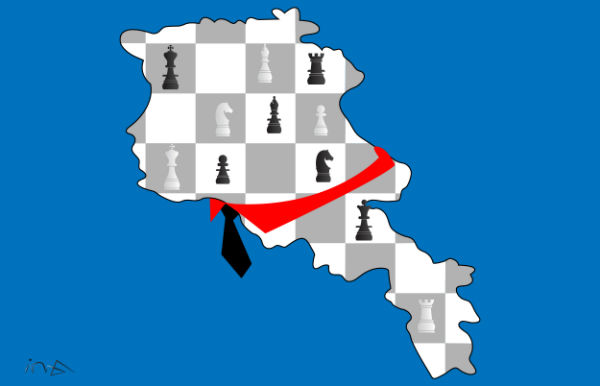 In Armenia, everyone speaks of politics — from morning to night.

In Armenia, politics is spoken of not only during the pre- and post-election period, but also permanently.

Because in Armenia everything is politicized — also and especially news outlets. At least six pages of an 8-page paper are full of political news, and the culture and sports pages are likewise as politicized as possible.

Even public interest pieces are essentially politicized. My remarks are directed particularly to online news media.

That is to say, in Armenia, everyone is a politician or political figure, and it’s not at all important whether you get a salary for this or not. In other words, in Armenia, politics is work for not only those who get paid for it, but also everyone.

Because in Armenia politics is the most profitable work. Thanks to politics, one can go from rags to riches.

If in Armenia some spend large sums of money to become Members of Parliament, that means that in Armenia, thanks to this MP status, at least some earn exorbitant amounts of money.

But, what’s most interesting is that in Armenia, there’s generally no politics or political life, and that which journalists and I and everyone else consider politics has nothing to do with politics at all.

That is to say, all of us from morning till night are engaged in something that has nothing to do with politics, and if we call that daily occupation of ours politics it’s because we were and are too lazy to find a more appropriate name for it, or the reason is that we, knowing that politics doesn’t exist in Armenia and thereby deceiving ourselves, make a show of the fact that politicians and all of us in Armenia are engaged in serious and genuine politics.

And now, understanding that my remarks and written words are turning into tautology, I understand as well that it can’t be any other way, because our lives with their multi-facedness are in and of themselves tautology, and especially and particularly to us non-partisanists this wrongly politicized life is tautology. And likewise, our overly politicized print and online news media outlets are tautology.

Prior to writing the previous sentence perhaps I was obliged to apologize to journalists and even to myself because from time to time I also consider myself a journalist, but if in writing these things I apologize to journalists and even myself, it still won’t be justified for me because I, being a journalist and other things, have always been and continue to be Armenian news outlets’ sworn reader or, to put it mildly, the glance-over’er.

If others spend the main part of their time eating and drinking, we spend our days reading newspapers and visiting websites.

And if others from morning till night live by eating and drinking and speaking of politics, we try to remain inside of politics and life by reading newspapers and clinging to news websites.

This is our life, and since we don’t have another life or the hope of another one, we are forced to be content and satisfied with what we have, especially since we like what we have. That is, not only do we love our overly politicized life, but also we add to politicizing that life.

But, for some reason, when it comes to politics we aren’t serious at all — constantly and all of us.