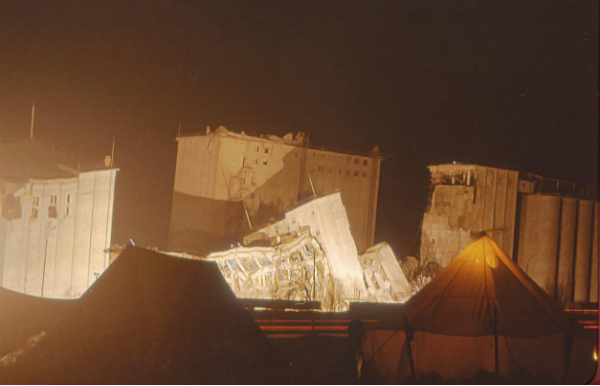 The local Armenian, Soviet, and foreign press all wrote about the Armenian people’s infinite sense of gratitude for the assistance it received. Earthquake victims’ words of gratitude were often cited by Georgian newspapers, which was to be expected as the Georgians had provided assistance immediately, without waiting for any directives.

The Soviet Armenian press published numerous letters and telegrams of gratitude of the Armenian SSR official bodies, and the Presidium of the Supreme Soviet of the USSR awarded many Soviet and foreign citizens the Order for Personal Courage. Erected in Gyumri was a commemorative plaque of Nikolai Ryzhkov, president of the Politburo of the Central Committee of the Communist Party of the Soviet Union commission, which was created to compare the work of eliminating the consequences of the Spitak earthquake on a USSR scale and to provide assistance. Ryzhkov’s bust was erected in the city of Spitak, and in 2008, he was awarded National Hero of the Republic of Armenia.

All this was to be expected, but there were also exceptional displays of gratitude for exceptional demonstrations of assistance. For example, Tamara Yefimovna Solovyova, a resident of the village of Urvan in the Meshchovsky District in Russia’s Kaluga Oblast, had sent aid in the form of a package of wool textiles and 2,000 rubles saved for a rainy day — a huge sum of money for a pensioner probably receiving 50–60 rubles a month [Grakan Tert (“Literary Newspaper”), Feb. 3, 1989]. Newspaper correspondent Grigor Janikyan is tasked with meeting Tamara — with suitcases full of presents collected from his daughter’s school. On the way, the journalist meets head of a Yerevan kindergarten Mrs. Amalyan, who, likewise, on her own initiative takes presents to Tamara with her school-age son. She intends to bring Tamara to Armenia permanently, but the latter, though she lives in a partly abandoned village, refuses. The story becomes particularly moving when we find out that the older woman’s television is broken, and it has been difficult for her to get it fixed.

What’s interesting is the story doesn’t end there. From the newspaper’s Nov. 3 issue of the same year (“All 10 Commandments,” Grigor Janikyan) we discover that in the summer Mrs. Amalyan went with her children to repair Tamara’s house but upon reaching it find the old woman’s cabin is on fire. They return, send everything from Armenia, then go and repair the hut.

This amazing story forced us to search for examples of people in catastrophe-experienced Armenia itself who likewise had helped some lone elderly woman, but either there were few or none at all, or the press at the time didn’t cover it.

Whenever necessary, Armenia also fulfilled its duty of friendship to other Soviet states. There’s a mention of this in one of the many descriptions of Armenia’s received assistance: correspondent of the Central Asian newspaper Pravda Vostoka R. Gaydarova writes that after the 1966 earthquake in Tashkent, Uzbekistan, “One of the first to send aid was Armenia. Those buildings that have signs reading ‘For happiness, from the Armenian people’ are serving Tashkent residents till today” (“The Brotherhood Phenomena,” Dec. 15, 1988).

Unfortunately, there was another earthquake in Central Asia, this time in Tajikistan, at the end of January 1989. A day of mourning was announced in that country in memory of the victims, a thousand people, according to TASS agency (“Tajikistan’s Grief and Courage,” Avant-garde, Jan. 27, 1989). In other words, “when it rains it pours” — both for Tajikistan and for Armenia, because both peoples were already knee-deep in their troubles and now had to rebuild disaster-stricken areas. There is a scent of fatalism in my remarks. The Spitak earthquake proved that such coincidences are not rare. Later, another earthquake struck neighboring Georgia, which resulted in the country calling back the builders it sent to Armenia.

Not long after the earthquake, first a Yugoslav then a Soviet military Ilyushin Il-76 aircraft with 37 tons of cargo crashed in Armenia. A memorial was erected in the place where the Yugoslav aircraft crashed and there were many media reports on the incident.

However, it’s difficult to find details of the second airplane crash in media reports of the time. It became clear from Lieutenant Colonel V. Musayelyan’s memoirs published years later that from the two airplanes, one passenger, in any case, was saved — 30-year-old Baku resident, mechanic Fahretdin Balayev. He was considered dead; his body was sent in a zinc coffin to his family; and state assistance was offered in coordinating the burial. In actual fact, Balayev climbed up into the “Kamaz” body of the airplane which was loaded with military tents. It becomes known from other sources that Balayev received a spinal injury, and in that condition ran to the nearest village, after which they took him to hospital…

For years efforts were made to build a Spitak memorial accompanied by a museum. It was to have immortalized the memory of the victims and express the Armenian people’s gratitude for the unprecedented aid in human history. Former First Secretary of the Spitak District Committee of the Communist Party Norik Muradyan was one of the devotees of this idea. That idea didn’t materialize, though today there’s a small section in Spitak’s ethnographic museum where literature on the earthquake is on display.

Instead, constructed in Yerevan, on the road to Nor Nork was an enormous metallic map of the Soviet Union with lines showing the places from which aid was brought to Armenia. The map rusted and deteriorated, until one day it disappeared.

This is not the only astonishing or funny episode tied to the tragic event.