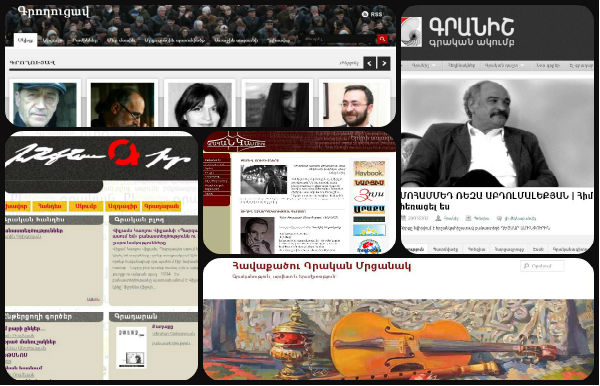 Dozens of Armenian-language literary sites and blogs can be found online today, the vast majority of which are personal blogs where the authors post their own writing or collect their favorite literary works.

Apart from websites and blogs, literature is published also as Facebook notes or even status updates. On Facebook, there are around two dozen Armenian literary groups and pages, where links are posted and personal writing is shared.

The majority of those uploading literary texts online are youth, who are better at mastering internet and digital skills.

Armenia’s scant literary press (two newspapers and three journals), the lack or negligible amount of honoraria, the scarcity of bookstores, and the lack of readers prepared to pay for a contemporary Armenian author’s book all drive writers to publish online.

The Internet allows to have such a volume that will never be possible to have in publishing in print.

Limits of time and space disappear online. An Armenian living in a small remote village in Australia can read on the Internet creative work published years ago and comment on it.

The Internet also allows the creation of purely online literary work, having an interactive connection with readers and incorporating multimedia in the text.

The no-editor space of the blogosphere allows anyone who suddenly woke up one morning and decided to become a writer to publish her work, organize a PR campaign through the technology, and acquire such an army of readers and quantity of “likes,” the likes of which state award–winning writers could never have dreamed.

But no matter how great the opportunities offered by the web are, the literature circulating online cannot be viewed as having an independent existence.

It currently is intimately tied to the print literary press because those who’ve secured authority in the print press and the literary values set and established under the influence of the writers’ union or other literary associations are being imported online. And so, the current hierarchy in print media is attempting to establish itself online.

This hierarchy is objectionable for the literary site Dipvatsq, where any “accidental” writer can publish his work — which is the complete opposite in the case of Granish website, which publishes what it considers to be the best literature.

On the website of Inqnagir, which succeeded Bnagir, the first electronic literary journal that brought a breath of fresh air to the literary scene at one time, the “best” and the “accidental” are placed side by side: there’s a section featuring the work of authors who’ve been published in print and another section, “Readers’ Works,” featuring the work of “readers”.

Another literary site, Grakan Kamurj (“literary bridge”), aims to gather on one platform writers from Armenia, Nagorno-Karabakh, and the Diaspora writing in Eastern and Western Armenian.

Despite the lack or negligible amount of honoraria, many probably perceive being published in print as a more serious success than being published on their own blog or website.

The winners of the Havaqatsu (“collection”) literary blog’s contest, for example, apart from a monetary prize, as an additional encouragent, are given the opportunity of being published in the Gretert literary newspaper.

But the trends are changing. If some time ago, print monthly were launching their own website (“Nartsis“), where published are the material published in the magazine’s print issues, today we have an example of the opposite process.

The literary process is gradually moving online. This is fostered by the Internet becoming more and more accessible, current issues in the literary publishing industry, and the high costs of print books, magazines, or newspapers.