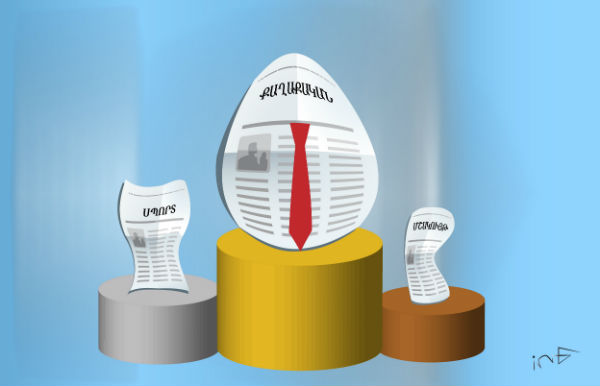 Last time we talked about the current state of Armenia’s print media, concluding that at this time it is under a real threat by online news media, if we overlook the fact that print media has long lost to online news outlets in terms of printing quantity.

I’m already repeating myself, but this is due not so much to the lack of topics or things to say as much to the alarming state of print media in Armenia, and from the hopelessness of escaping that alarming state, because it’s becoming clear that print media journalists puts more effort and energy into the online version of that same paper than she does for the print version.

And that too is understandable and explicable because the journalist herself sees and feels the irrefutability of the online’s advantage, especially in terms of urgency, as well as in terms of reactions on Facebook and elsewhere, because the main readers of print media are, relatively speaking, the elderly and those not having a computer, as well as those who don’t use computers.

And since this type of reader is decreasing day by day, also naturally declining is the hope of whether the print media will ever be in a condition to withstand online news outlets’ daily and hourly attacks.

But, nevertheless, this alarm is also entirely conditional and relative, because this triumph of online news outlets that’s taken off, negatively impacting print media’s circulation and reputation, has quite a positive impact on the development and emergence of new journalists, as well as on more established journalists reviewing themselves and their work and seeking new creative avenues, because online news outlets ensure totally equal conditions and quite an interesting competitive field for both rookie and established journalists.

Us readers from the Soviet period would never imagine then that there would come a time when our readers would prefer political and domestic policy analyses over cultural and sports news.

During those years it was also impossible to suppose that our readers would read the leading and editorials of newspapers, but a fact is a fact: the contemporary Armenian reader, preferring the political over the cultural or sports, also readers editorials and leads.

And though the editorials and politically oriented articles in local newspapers are not always brilliant, the contemporary Armenian reader reads them, and the main reason for the imperfection of political pieces is the incomplete and inadequate level of Armenia’s political reality.

It’s a different matter, that sometimes some journalists try harder than necessary to present some of our officials and MPs who are already not that bright as more unintelligent. The opposite happens too: some journalists endow some partly intelligent MPs and politicians with absolute intelligence, waxing lyrical in golden Armenian and presenting them as supposed benefactors and saviors.

But this is a subject for a completely different conversation.