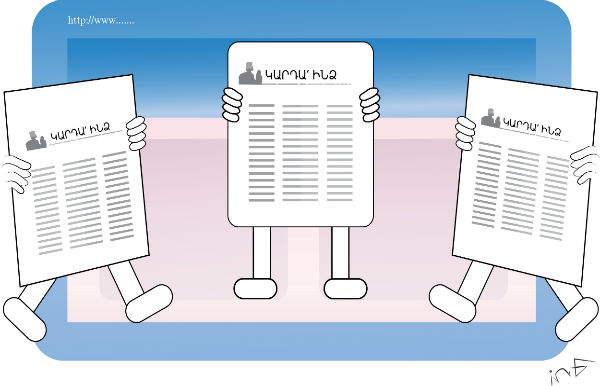 Recalling the Soviet-era magazine Garun in detail, I attempted to notice and behold those first traces of liberal journalism, which Garun embodied and included in itself, in a period when Armenian newspapers were utterly cut off from life — unlike our newspapers and especially websites of today, which mainly study life and man, with all its desirable and undesirable traits.

And this happens more often with journalists of online news sites because they basically are obliged to ensure around-the-clock journalism.

And if an article with the headline “General Manvel’s room is being cleaned up” is read the most, that fact and similar other facts cannot not be an impetus and decisive force for journalists and especially young journalists.

And the president, in turn, will appeal to the Public Council for assistance, and the Public Council will again get confused, since the Public Council is comprised mainly of officials, thanks to whose efforts censorship became abolished in Armenia. But all this doesn’t mean that us journalists have to perpetually dig up “likeable” and “clickable” stories on some oligarch’s son or some other’s daughter’s wedding, and if the godfather is also rich, the journalist’s success is ensured.

All this can be forgiven because Armenian news websites are still in the stage of emerging and establishing themselves, and us journalists serving these sites are also at the same stage.

And the public is not currently demanding much from us, being satisfied with what we’re offering, since the consumers of Armenian news sites today are also in the initial stage of emerging and establishing themselves.

Consumers of news websites are more active and productive than consumers of regular newspapers, and with their ongoing flow of comments they don’t allow online journalists to rest. They do this with particular enthusiasm and self-confidence, since especially the main commentators are on absolutely equal terms with the website’s main journalists and probably don’t even assume that us online journalists receive regular salary or honorarium for our work.

And even if they do suppose we get paid, I doubt their enthusiasm and desire to comment would fade because there’s a type of person who for years has dreamed of seeing his writing published but — because of the limited numbers of newspapers and the poor quality of his writing — for years his dream has remained unfulfilled.

And so, the computer, the Internet, and news websites have provided an opportunity to not only these “writers” seeing their writing published (though only in the comments section), but also commentators who judge. And, to a certain extent, the existence of these judging commentators are necessary because just as in the case of officials, oligarchs, and others, so too in the case of journalists, impunity evokes a sense of displeasure and inequality.

Once again I tried to describe the achievements of journalism and journalists in modern-day Armenia, but again I digressed.