Watch the News with Your Eyes Shut… 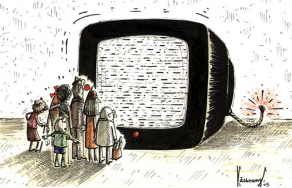 Recently watching the main news programs on TV it seemed to me that I was watching the news from online news sites posted on my Facebook wall. It was a strange feeling. I was thinking, how great that news websites enjoy such a good reputation that widespread mass television outlets also copy the appearance of their studios or their communication tools. Then I remembered that I shouldn’t lose my vigilance, as often seemingly harmless things like a Trojan Horse bring news of an impending catastrophe to us peaceful slumberers.

Web TV is nothing new, as news websites offering video content have earned a reputation ahead of the pre-election period, but by some miracle, broadcast TV stations have decided to adopt alongside the other boring, old junk programs the visuals and approaches of web TV sites, which I think is very important from the point of view of influencing people. Viewing time as duration, as proposed by one of the most influential philosophers of the 20th century, Henri Bergson, changes the probability of the expression of will it has toward the action.

As a result of receiving reliable news, Armenians on Facebook have not only become accustomed to the news alternative, but also attribute a certain visual structure, with specific studio features and the host’s skills, clothes and many other characteristics, to such news and news agencies.

From the angle of non-verbal communications, alternative news sites have syntactically interconnected their balanced, credible information with modern studios and intelligent hosts. It’s been a while now that viewers have become used to this fact and in this length of time their will is prone to having weakened filters in perceiving the information provided to them, because they have understood in this case there is no need for critical and vigilant listening.

To make this issue more apparent, let me say that I follow Aram Abrahamyan’s Post Script online program. On this show, the guest presents a report from a political or civic perspective through responding to a series of apt and pointed questions. I have become accustomed to viewing this program as a “moment of truth” — a perception which moves to Shant TV’s studio when the program Herankar (“perspective”) is hosted by Aram Abrahamyan.

Studies on the provision of information (around priming theory) have become widespread in western countries, the findings of which prove it’s possible to govern the method of perception of the information provided by news media outlets. In particular, through this subliminal priming, any new (related or unrelated) piece of information has certain syntactic limits in terms of meaning and its interpretation that can be programmed.

New information can’t be viewed out of context, since context is shaped by the flows of communication preceding it, including words and images. Images, as a rule, have more resonance by nature, just as at one time great Renaissance masters’ masterpieces had a big influence on humanity, petrifying women into motherhood or beauty, while men were immortalized in heroic acts or creative functions.

In this case too, technologists shaping public opinion most likely haven’t sat around idle, trying to manipulate our perceptions by creating optical illusions. Emphasizing the new studio and the seemingly modern, neatly dressed host and adopting the communication schemes of alternative news outlets, technologists shaping opinion have placed syntactic locks on our heads which block all the expressions of will amplifying our perception.

While watching television news, our brain, seeing the fresh new studio, at once thinks that the news that follows will be reliable. This is a semantic substitute, the feeling of which we have lost because we watch the news with our eyes open.