Again on the Need for Self-Regulation in the Media 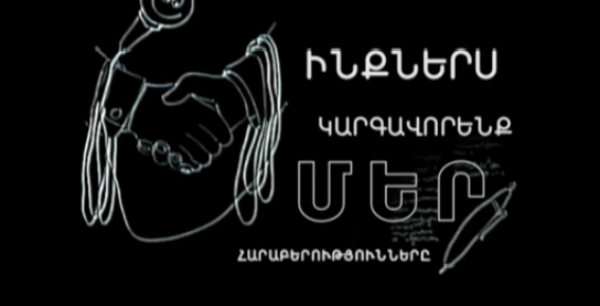 The story of VivaCell-MTS giving smartphones to journalists, which Media.am also covered, raised several questions, again compelling me to write on issues of self-regulation in the media sector.

By the way, in the comments below my article there were also judgments against my character, but “accusations” of working from a grant are so outdated and repetitive, that I’ve long regarded these with humor and consider addressing them to be a meaningless occupation.

During a TV broadcast on this topic, an editor whom I greatly respect said that his reporters asked him when they were confronted with questions on how to report on something. When I tried to find out whether they had written rules of ethics, he responded negatively. Meanwhile, if there were written rules, reporters wouldn’t need to contact their chief editor each time to ask could this or that be done or not?

At the same time, by saying “fair game” or being honest in your relations with the public I don’t mean that everyone absolutely has to have rules of ethics close to an ideal. Not at all. A fair play rule with the public is also declaring, for example, that you won’t be unbiased in this or that matter… This too is honest, and then let the audience decide to trust your news agency or not. This is more honest than saying that you will be impartial and unbiased, but in practice, every day breaking the rules of the game you yourself set. This is more honest than giving honesty and law-abiding lessons to others while breaking the law every day.

In the case of self-regulation, there also wouldn’t be this act of copying from each other — which is called PLAGIARISM — which differs in no way from stealing eggs or a horse. Especially now, with the development of the Internet, this phenomenon has reached ghastly proportions. While writing this piece, I came across the following status by local daily Aravot chief editor Anna Israelyan posted on her Facebook wall (which I publish here with her utmost consent): “Today our reporter made a mistake — in covering the NCTR [National Commission on Television and Radio] meeting, she had calculated the fine against Armenia TV as 1,000 times the minimum [monthly] salary [which is defined as 32,500 drams]… And it turned out that the NCTR had fined Armenia TV 32.5 million drams. We quickly corrected our mistake and received calls and fact checked with the NCTR. But on two websites, which had stolen the news from us, making slight changes and publishing it without citing the source, it still says that the NCTR fined Armenia TV 32.5 million drams.”

The source (Aravot online) had corrected its mistake, and with it, the plagiarists were discovered…

Those who debate with me often object by saying that you can write as many rules as you want but break them every day. Of course, I don’t rule out such a situation. But the existence of rules, in any case, is sobering: isn’t it so that readers (listeners, viewers) at any moment can point to your written rules and say that you’re breaking them?

Perhaps this — not being accountable to your audience and not being attentive to the reaction from your audience — is also one of the reasons that Armenian news agencies avoid self-regulation. I don’t know.

There are two important elections coming up in Armenia and this, the matter of self-regulation, will become more current in one to two months when preparations for the parliamentary elections will begin along with the campaign period. It is when political passions flare that news agencies’ professionalism, candor, impartiality, and so on are boldly emphasized.

In 2007, several news agencies adopted a unified Code of Conduct of Media Representatives. Around 40 news outlets have signed it today. Regretfully, among them are few TV companies and even fewer online news agencies. This Code also has an appendix titled “Declaration on Principles of Election and Referendum Coverage.” I have no illusions that in the upcoming elections Armenian news agencies will follow these rules or the declaration on covering elections. But one point, at least, I would like to be preserved: “Broadcast media must refrain from backing any particular candidate or party, while print media, if it has such an intention, to declare it clearly and in advance.” Under “print media,” I’d also like to include online media.

Following at least this rule would be an expression of honesty before the public.

P.S. I was preparing to send this piece to the editors when Hambardzum Hambardzumyan’s splendid article “Hidden Advertising and Evident Contempt for TV Viewers” was published. The regretfully very common phenomena cited here is, among other reasons, the result of a lack of self-regulation.