A Few Faces of ‘Dressed Up’ News 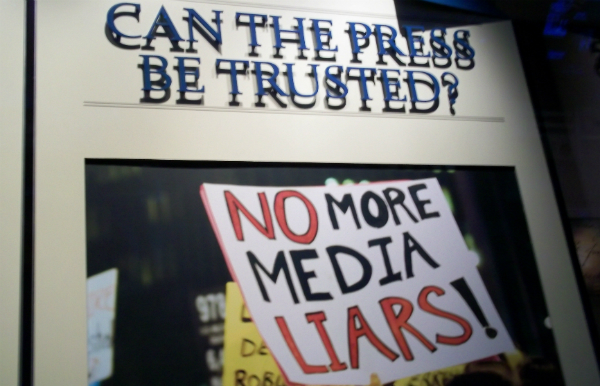 In Armenian TV stations, people are absent. The reporter for “The Sunday Hour” on Armenia TV has reached the village of Salut in Shirak marz (province) and describes how the 15 families in that community go to school by donkey. “It seems that the 21st century bypassed this village,” says the reporter.

And who should find out who is responsible for the fact that there is no school bus for the children? Or who said that this is the only problem in the village? You know why these questions are unanswered? Because the meat of the reportage is the donkey and not people — in this case, the children. If it was people, there would be problems and people responsible for those problems. The reporter has “dressed up” the news with the donkey so that people are effortlessly left out of the picture. Even if she basically spoke about the donkey, people wouldn’t have “crept into” this reportage — and herein lies the problem.

Secretary General of the Armenian Communist Party Ruben Tovmasyan was a guest on Armenian Public Television’s (H1) First News (“Arajin Lradvakan”) “Interview” program. The interviewer, Nver Mnatsakanyan, didn’t want to bypass Nov. 7 (the October Revolution). And so he asks about the Communist Party being in or out of politics, about importing communism into Armenia, about Lenin’s footing, but about the number of Communists you can count on your fingers? Nothing. How do they live, what comforts them, what value does Armenia have for them and so on?

He doesn’t ask, and it’s hard to say if he suffered at length not to ask these questions. They are in the social category and thus are a dangerous topic for H1. Instead, Nver Mnatsakanyan asks the Communist Party leader about the likelihood of his party coming to power. Perhaps you are stroking his political self-esteem, but he doesn’t have the time to realize that you’re laughing at him, otherwise how are you trying to convey in all seriousness that a 20,000-strong party can come to power? Speak of people, reporter. Why aren’t you? Because you never speak of people with anyone and Ruben Tovmasyan was no exception.

Even in a report about a high-ranking politician there is nothing about people.

Yerkir Media prepared a public piece on the recent high-level dismissals and resignations. They reminded viewers that first deputy of the presidential staff Mikael Minasyan also resigned. They recalled his reason for resigning — that is, to help former parliament speaker Hovik Abrahamyan at the Republican Party of Armenia’s election campaign headquarters.

Why isn’t the chief of presidential staff moving to campaign headquarters and not his first deputy? The reporter doesn’t get into details; that is, his is a reportage purely on political transfers, where there is no answer to the essential questions: who is Mikael Minasyan? What is his intellectual standing in government? There is no answer because the reporter won’t say that it is the president’s son-in-law that is moving to campaign headquarters and not the first deputy of the presidential staff. If he were to say son-in-law, “it wouldn’t be understood” because a large part of the country’s population have son-in-laws. If Yerkir Media remembered the son-in-law, it would have to say what intellectual standing does a son-in-law have for being the chief of presidential staff?

Armenia TV “succeeded” in conducting an exclusive interview with new police chief Vladimir Gasparyan, who said he has come to restore the “lost honor of the police uniform”. If the reporter in conversation sees the person and not the official, in these few words she would see also the person of (former police chief) Alik Sargsyan and also the person of (Armenian President) Serzh Sargsyan, who, in introducing the new police chief, said that Alik Sargsyan accomplished all the tasks put before him.

That is, the uniform’s honor was also restored or at the very least, wasn’t destroyed. If it hasn’t been restored, then that’s from where the reporter should begin the interview and not learn from the new police chief from where he is going to begin. Then the reporter has to run to Alik Sargsyan to find out what were the tasks he accomplished (that resulted in the police uniform losing its honor), and if it hasn’t — which Alik Sargsyan will insist it hasn’t — why does Vladimir Gasparyan have to restore it? After which, if possible and only purely rhetorically, she could ask, what did the Armenian president mean when he said “accomplished tasks”?

And in this entire debacle, where is the person, which theoretically could’ve stood for the accomplished task? The fact is the reporter is forced to dress up her news with extraneous words as long as she, basically, isn’t speaking. Much like the First News reporter’s description of the Nov. 7 opening of the new hall at Zvartnots International Airport: “It was a pleasant surprise.” On whose behalf is the reporter claiming that what took place was a pleasant surprise — on behalf of emigrants, Armenian officials who love touring Europe or those returning to Armenia?

By the way, news can’t be two-faced. On Nov. 3, First News announced Trchkan Waterfall is no longer in danger. And have you ever raised alarm about an imminent threat? Somehow, I don’t remember. Because I know from what position it would’ve been presented: another several Armenian villages will be provided with electricity, another move to ease the load on the nuclear power plant, (approximately) 20 jobs opening in the nearby town of Mets Parni, and so on.