Your Editor Should Know the Law Very Well 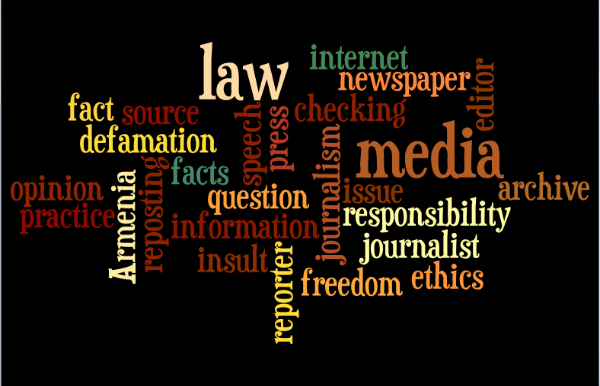 In the US, news provided by anonymous sources are published only when the information is confirmed by two other sources.

During the Turkish-Armenian-American journalist exchange program organized by the International Center for Journalists (ICFJ) titled “New Media, New Challenges: Reporting Best Practices for a New Age,” Armenian journalists, while in Washington, had a chance to meet with Fletcher, Herald & Hildreth, PLC Special Counsel Kevin Goldberg. The discussion with this attorney on freedom of speech and press issues, in particular, how questions of accountability tied with libel and defamation are regulated in the US, gave rise to parallels with the reality in Armenia.

And so, first the good news. In the US, no one would ever be held liable for calling someone provincial. To our comment that Armenia’s former president is attempting to hold a local newspaper liable for calling him “provincial,” Goldberg said that in the US, they wouldn’t consider this libel, but rather they would assess it as an opinion, for which people are not held liable. However, it would be a different issue, say, for a statement such as “In my opinion, he’s a murderer,” for which one would, indeed, be held liable.

Generally, according to Goldberg, they don’t treat public figures with kid gloves: they are more vulnerable before the press than other citizens. The explanation mainly is that public figures have a special role in society and a greater access to the media to defend themselves. And this is worth a second exchange of experience.

But this concludes the news that will appeal to my colleagues. The rest, which I will convey, is not as beneficial in the current ideas and interests of our Armenian journalism guild.

The chief editor of one of our papers, against whose office a few libel and defamation lawsuits have been launched, was suggesting that other news outlets, as a sign of solidarity, republish the material which gave rise to the lawsuits. Another newspaper, which has already lost in court, was providing grounds that they have only republished that which has already been published in Russian media, or they have printed only that which the source said, who later identified himself. In the US, all this wouldn’t be considered “extenuating circumstances.” As told to us by Goldberg, republishing the libelous material can again be considered libel. And according to him, not only the one who republished the material, but also everyone — both the journalist and the editors — will be held accountable for libel and defamation.

There are individuals other than journalists In prominent newspapers in the US whose sole task is to check facts from different sources. Thus, there’s less of a likelihood that a disputed fact or an accusation will be published just because someone said it. Miyoko Wolf, a news researcher with The Seattle Times, showed us their huge online archive for internal use where there are not only phone numbers of people who are informed of specific issues (say, they have ties in Turkey and can provide clarifications if something happened that had to do with this country), but also summaries of crimes, deaths, property rights, drivers’ rights and so on. And before publishing information conveyed by someone, first they check if that person is indeed reliable: whether he or she has a criminal record or a history of being in court, for instance. According to Wolf, news that cite “sources who don’t wish to have their names published” can be found in papers only 3–4 times per year, and they’re not too happy about that, since they’re sure that it’s also because of dubious sources that readers lose their faith toward the press.

ICFJ Senior Program Director of Special Projects Luis Botello provided a clear response to his own posed question as to why all this is important and particularly, why journalistic ethics must be maintained: “To prevent government interference in our work.”

And generally, as Kevin Goldberg said, “Your editor should know the law very well.” And furthermore, before giving the green light to any material being published, the editor has to ask himself and the journalist the main question: Has everything been done that could be done to check the facts?

P.S. After this publication, for sure people will ask: how can you compare our country with the US? Look at our print run (compared with theirs), our judicial system (compared with theirs), and finally, what state our country is in (compared with theirs). Everything is right, of course, but for me a very controversial issue remains that, say, can herbs be sold in dirt in the street as long as the country is in this state? Or perhaps there will be a change of even one millimeter when they stop trading in dirt and dust? Or, again returning to our original topic can unconfirmed news be published as long as our courts are still in this state? Or, nevertheless, is it worth it despite everything to ask yourself the main question mentioned by Kevin Goldberg?