The Life Of Media During And After The War: Mediamax’s Experience 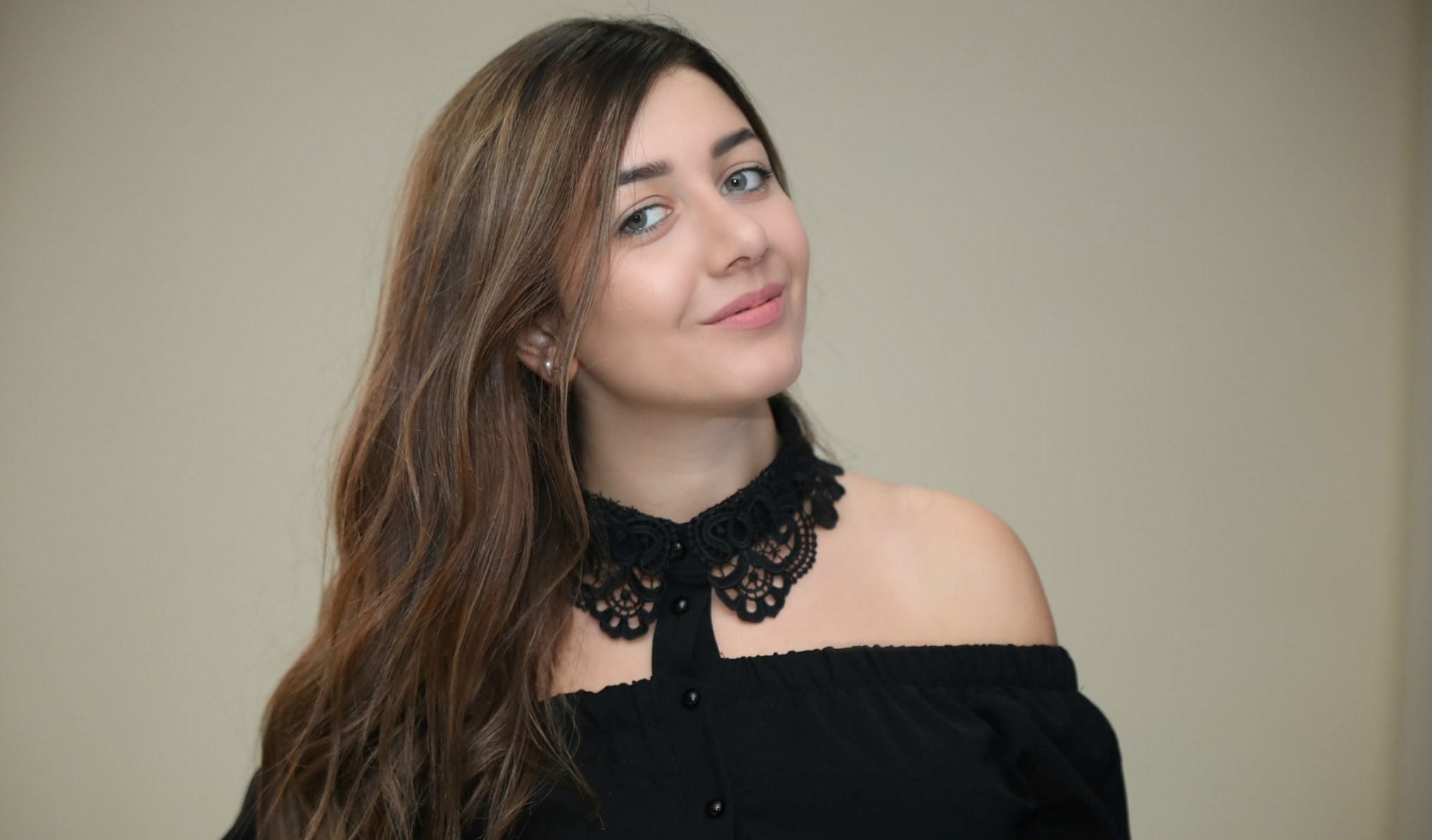 On the morning of September 27, 2020, minutes after the first announcement of hostilities – the “‘projectile’ has exploded,” the editorial offices went into emergency mode. In parallel with the clashes on the battlefield, “combat operations” began in the virtual realm.

For almost five years now, the format of Mediamax, which used to work as a classic news agency, has changed, becoming a “symbiosis” of special projects, “long-forms,” authorial materials, online journalism, however, this does not prevent our team from being “transformed” very quickly and working in the news dimension. This is what happened during this Artsakh war.

The 44-day war was covered by Mediamax’s Editorial Board, which consisted of a director, editor-in-chief, journalists, publishers and translators. The working day started at 8:00 am and ended only after the flow of news was extinguished, sometimes at 2:00 or 3:00 am.

During this war, there were many cases when journalists hinted that due to martial law, they could not say anything to their audience. In many cases, the journalists were guided by the principle of not harming the Armenian army with their media coverage of military operations.

The subject of a separate article, of course, is the work of the state propaganda apparatus during this war, which kept the public in a “victory slumber” for days, as a result of which the media may have lost some of their audience’s trust. It is a fact that a large part of the audience is skeptical about the information provided, but there is another side to the coin – people who continue to blindly believe everything that is provided in the form of messages from government agencies. This is where the problem of critical thinking, the approach of verifying information from several sources, and raising media literacy arises.

While covering the hostilities, the Mediamax team selectively approached the topics. It did not publish news about everything, but only important information. In some cases, brief information was reported not on the news site, but on Mediamax’s Facebook page (during the war, the number of “unique” users of our page, which had about 88,000 followers, turned into 107,000). In parallel with the news about action on the battlefield, our website provided our audience with access to the developments and main important news in the field of foreign policy in Armenian. The news was broadcast in three languages: Armenian, Russian and English. 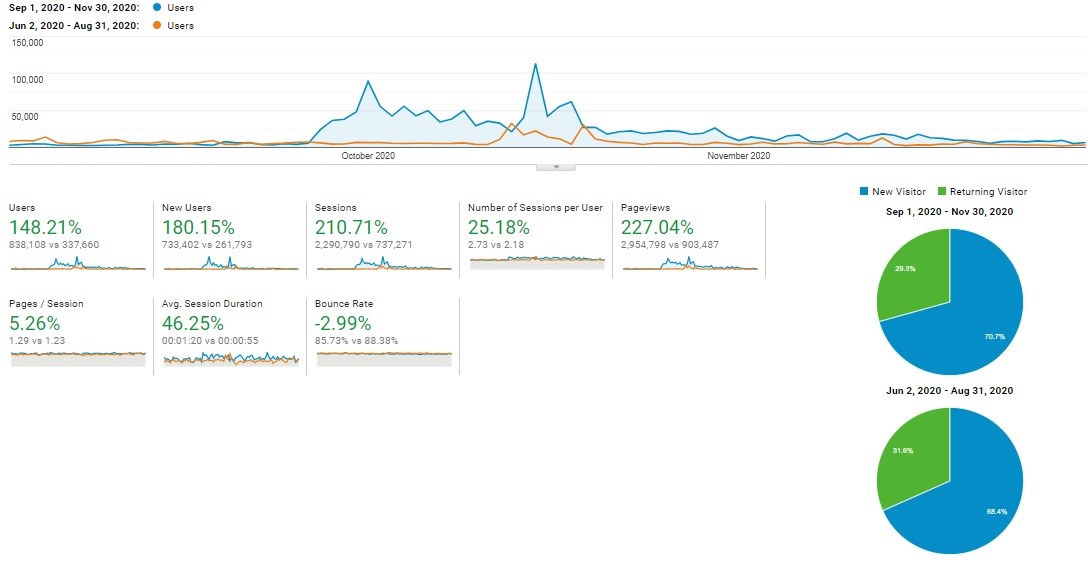 Mediamax.am website traffic statistics according to Google Analytics. The data of the visits in the presented graph are from September 1 to November 30, 2020. The graph is presented in comparison with the visits of the previous three months, which shows that by all indicators the site’s audience has grown and had a positive dynamic.

Although we did not have a journalist covering the events on the spot in Artsakh, however, due to the provision of accurate, reliable information, Mediamax was able to gain the trust of a large audience and increase the audience fivefold. If in August the average daily audience of Mediamax was 4,955, in September that number became 8,748, and already in October, 37,814.

In November, when the news was relatively light and Mediamax started to return to its format, it was very selective in its coverage of the news, publishing only the most important, the average number of visits per day became 11,267.

Taking into account that the lion’s share of Mediamax’s audience comes from Facebook, even though the share of direct visits (12.5%) and organic search (24.7%) visits are not small, Mediamax worked not only on the Facebook page but also on the Mediamax Community group that had been opened about three years ago.

As a result of our commentary in the group and publishing news in other more informal formats, the number of group members increased by more than 30% in September-November, which allowed us to attract a new audience. Adding group members, by the way, was not done by us, but people applied for membership themselves or their friends added them to the group.

As you know, the visibility of group posts on Facebook is higher than in the case of pages, in this regard, we positively appreciate the increase in the number of group members. By the way, a rather good index was registered in terms of the number of active members in the group. 3,000

The crisis and future plans

Now our editorial office has the task of stabilizing the audience and trying to maintain it. The work and discussions in this direction are mainly aimed at developing new formats, covering topics relevant to the interests of the audience.

In parallel with the stabilization of the audience, Mediamax’s sales team is monetizing it. It is no secret that the COVID-19 epidemic, which broke out both in the world and in Armenia, created certain financial problems for businesses, which also had a chain reaction on media advertising. And the already difficult conditions were exacerbated by the war and created a dangerous situation for independent media, whose main source of funding is advertising.

Due to the crisis caused by the coronavirus in Mediamax, there was already a certain decrease in financial flows, after the start of the war, advertising was reduced by 20-30%. Some agreements were frozen, some were canceled altogether. Before the start of the war, there were special project agreements. Agreements on the size of a number of Native advertisements have been “frozen” and some of them are being restored.

The situation is really difficult, but we do not lose our optimism. Mediamax’s financial flows are as diversified as possible, which allows us to always stay afloat in difficult situations. The budget generated from advertising is formed from the monetization of several websites of the media company, about half of the financial flows are provided by monitoring services, which are provided through the Maxmonitor.am platform. So we are optimistic, we see the situation as a new challenge, a door opening to new opportunities.