“The journalist answered: What difference does it make that it is wrong, who will pay attention?” 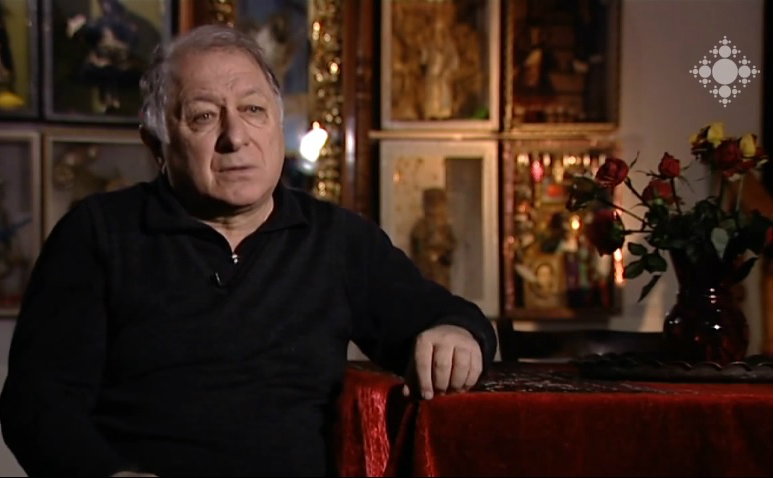 I have noticed that journalists speak about different things with the same words. Let’s say with the same words they are writing about Arshile Gorky and about a self-taught painter living in the suburbs. And it turns out that the man who understands art will not even read that, since he immediately feels that what is written is stupidity. And the ordinary people, who are very far away from art, begin to believe that the one characterized by big words is actually a great painter.

Of course professional journalists who make surveys, investigations, and findings play a great role in the entire world. But it is not like that with us. More than half of the articles are uninteresting, often the dates or names are cited incorrectly. TV announcers can even misread people’s surnames, which is simply impossible.

The impression is that websites and studios do not have editors. But that is a very important profession, since there is often a need to check every word and fact.

Recently I told a journalist that in Parajanov’s House-Museum there are 1500 exhibits, and that journalist wrote in an article that there are 150 thousand exhibits. I called and told them that 150 000 expositions in one person’s museum is not possible in any way, that is impossible. And the journalist answered me: What difference does it make, who will pay attention?

What I am saying is that journalists themselves do not take their work seriously. And that is very painful.

In any case, the reported information must be accurate and objective. Even if you feel personal hostility towards any person, you have to try to not include that in the article. And especially to not write about that person with offensive words, otherwise a useless situation will result.

In reality I really see the importance in the role of the journalist (I also consider myself to be a little bit of a journalist, since I am a photographer).

A journalist is able to speak with a person, who, let’s say, is known as a stiff bribe taker, and has appointed the first figure in the fight against corruption. The journalists asks him about how to fight against corruption, and he answers with regular false and stupid answers. And so it is a meaningless conversation. It is similar to when you catch a thief’s hand during theft and he tells you that he is not a thief.

The journalist must be able to ask the kinds of questions that cause the respondent to pull off their mask. This is where the skills of the journalist will be apparent. It is possible to do so without the use of one bad word or insult, even seemingly by “caressing”, to “open” the interviewee, so that their nature is obvious.

I think that this type of mastery is missing in our journalists.

Of course, there is too much information that is similar, in the same language, it is necessary to be able to catch the important parts among it, which is very difficult especially on the internet. After all, Egypt’s revolution took place through social networks. The internet is a powerful thing, which is the space to express, suppress, argue or unite thoughts.

Even if some people don’t think like that, it is the same, the network unites. In the case of “Sasna Tsrer” thousands of people were aware of each other over the internet. That can also help during the elections: to be careful, preventing falsifications, following the election results.

After all, false reality is one balloon, whether you mildly puncture it or simply touch it, the air inside will come out.

There are many empty and meaningless speakers. And the normal person particularly does not like to talk, living enclosed, but for sure knows what they will say, what they will do, and by who will they stand. In the meantime, now already standing by someone or not standing has a big meaning. I will not speak again about sitting at the table and listening to toasts about fake patriotism, which is disgusting.

When I think about Parajanov’s gravitational force about phenomena, I understand that in Parajanov’s art and image there is not one falsehood. Animator Yuriy Norshteyn said that Parajanov materialized spirit. And that worries people, because Parajanov had the grace to see the lie, expose it, and display it.

I have never prohibited people from taking photos or selfies in our museum, that way I began to search for photos of the museum around the world. It has already been a few years that photographing has become with money. I think that it is right, because if you are taking photos of other exhibits and not of yourself, naturally, they won’t buy albums anymore and you are able to pay 700 drams.

There is a belief that artistic works are the background of photographs. Well, what do I say? It is like that, but in my personal opinion, that is wrong. Once the Louvre “Gioconda” was hung in an entire hall, with the different works of Leonardo. Later, staff from the museum saw that people were coming to specifically look at “Gioconda” and take photos beside it, and were not paying attention to other pictures. The French took “Gioconda” to a separate hall, and after a while the picture was surrounded by special railings, so that it would not be possible to come very close, since the crowd of people was huge. Even all of the corridors had signs, which showed how to go towards “Giaconda” if you were coming to Louvre only for that picture. Now taking photos is prohibited. After all, how much can be photographed…

To appreciate art it is necessary to be prepared from a young age, from school, from kindergarten. This approach does not exist with us.

Recently I read a script about our museum where there was false information, I asked: where did you find the information? They answered: the internet. Well, the museum is located in Yerevan, is it difficult to come and check the facts with the staff, who possess that information?

On the internet no one bears responsibility for the publication. Write whatever you want. It is simple, if you search Parajanov’s name on the internet, you will also find a lot of stupid news. The painful part is that it is difficult to differentiate between what’s right and wrong. We must be prepared for that as well.

I hope that people do not forget that besides the internet, they can also use books, communicate with people, and visit museums.