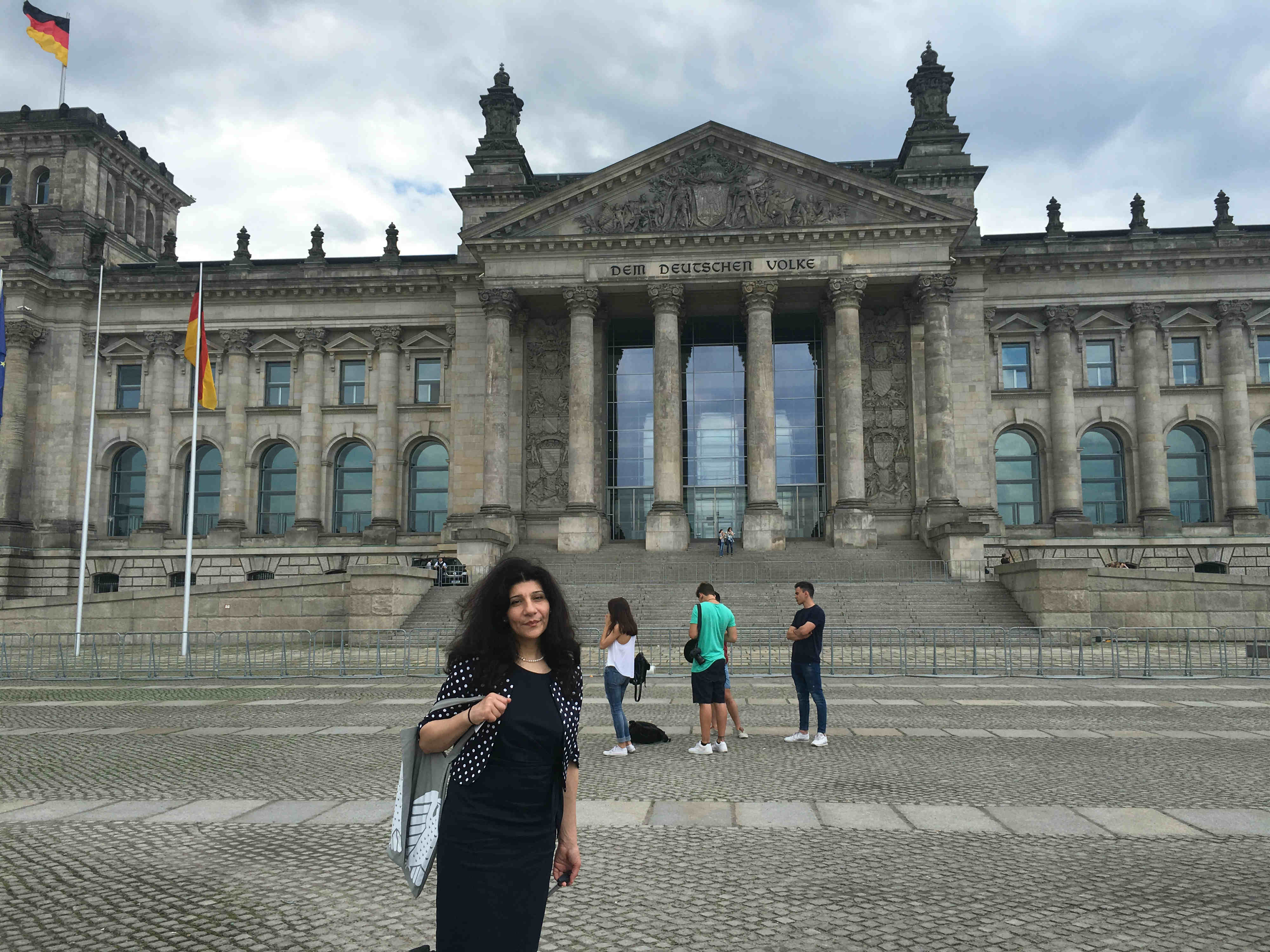 The German Bundestag on June 2 in open voting, as President of the Bundestag Norbert Lammert deemed it, with a “remarkable majority” in favor, one against and one abstention, adopted the resolution “Remembrance and commemoration of the genocide of Armenians and other Christian minorities in 1915 and 1916″. The German, Turkish, and international media in general have been covering or analyzing this historic event for weeks.

Armenia’s media too, naturally, since June 2 has covered the adoption of the resolution, but how?

On June 2, 2016, in the Bundestag, to my surprise, I saw none of my colleagues from Armenia: I was searching for our TV companies’ microphones and video cameras, but there were none. The Assyrian TV station’s camera operator was running back and forth, but for the journalists of our independent country, from what I guessed, unfortunately, money had been saved.

I hadn’t watched Armenian TV channels on June 2; various German channels so densely covered our subject that the Armenian magnet was getting weak. But the next day, I watched the coverage on the Public TV of Armenia’s Arachin Lratvakan, Armenia TV’s Zham, Shant TV’s Herankar, and Kentron TV’s Epikentron news programs, where I saw the same mistakes.

To this day, the images offered on June 2 haven’t changed, so the mistakes continue. And since the Public TV’s name implies that its customer is Armenia’s tax-paying public, and therefore the claimant to its quality, let’s regard my article below according to this TV company’s offering and with specific examples.

The 5 pm broadcast on June 2, naturally, begins with information about the resolution parliamentary session. The scenes are practically the same as those of the 1 pm broadcast, when the session had not yet begun. From minute 2:41 of the 5 pm broadcast it is said that the “Resolution bore the name ‘Remembrance and condemnation of Armenians and other Christian minorities 101 years ago’.” Though the German name of the resolution was also inconsistently cited up until June 2, what was adopted on June 2 doesn’t contain the word “condemnation” (using the word “commemoration” instead). Let’s continue watching this broadcast: in the shot is a ballot box placed in the Bundestag meeting hall, in which MPs are placing ballots. It appears that closed, secret voting is taking place. There’s no hint as to which day this footage is from and the word “archive” is absent. The author of the text doesn’t clarify what sort of voting took place at the Bundestag on June 2.

Days before, when German journalists asked German foreign minister Frank-Walter Steinmeier how he was going to vote, Social Democrat Steinmeier said that their faction will hold a secret ballot. We reported this in recent weeks in Azg.

On June 1, many of our German colleagues expressed their opinion, urging the voting be open and the public to know who voted how. On June 2, the Bundestag took into account German journalists’ opinion. We all saw the raised hands, how everyone was voting. So why and with what purpose show that ballot box from June 2 to 7 without writing “archive” on it or indicating a date, when we’re talking about the open voting that tool place at the June 2 meeting, on the same day in the Bundestag? Aren’t you perhaps distorting this important historical fact?

Arachin Lratvakan‘s main broadcast is at 9 pm, so let’s look at the offering for this broadcasting hour. Starting from the 1:45 minute on June 2 and the 09:15 minute on June 3, the same images are shown, on which is written only “Germany”.

Let’s watch the 4:23–4:46 segment from the June 5 broadcast. Shown is Chancellor Angela Merkel, during her speech in the Bundestag, missing on the shot is the word “archive,” which they managed to place on the same shot briefly on June 2. We also don’t see the word “archive” when the ballot box is shown, while the text speaks to the voting result: “Germany’s legislature nearly unanimously recognized the Armenian Genocide”. It should be noted that showing Merkel making a speech at the Bundestag and Vice-Chancellor Sigmar Gabriel and foreign minister Steinmeier firmly seated in their places is not only inappropriate, but also wrong, since visual information is more lasting, and the information we hear or read after — that neither the Chancellor nor her deputy nor the foreign minister participated in the June 2 meeting — might be forgotten. Especially since in the June 2 broadcasts it is stated that “Chancellor Angela Merkel supported the resolution and during initial voting voted in favor of the resolution; nevertheless, Chancellor Merkel, as well as Vice-Chancellor Gabriel and foreign minister Steinmeier were not present at the plenary session.” So why is it so necessary to show them in the Bundestag meeting hall?

Another picture of the main news broadcast on June 2 also caught my eye. At the 31:43 minute, Rev. Fr. Serovbe Isakhanyan of the Armenian Diocese of Germany recalled German President Joachim Gauck’s April 23, 2015 speech at the Berlin Cathedral, during which the German president became the country’s first political figure to use the term “genocide” for the crime against Armenians. Shown in the clip is the scene of the speech at the Cologne Cathedral on April 17, 2015, to mourn Germanwings victims; moreover, this information was clearly written in German. Seen in the clip is the face of Central Council of Muslims in Germany secretary-general  Ayman Mazyek who took part in the requiem service. These clips too are shown without the corresponding “archive” word.

So it seems that the Muslim leader stood by us on April 23, which, of course is not true. Though not intentionally, but this way we carelessly falsify our modern history.

The same scenes, without indicating “archive” or a date, continue also in the June 6 broadcast.

Let’s watch from minute 23:31 and we’ll be convinced. There’s no change also in the June 7 broadcast, from minute 17:10 is the image of the ballot box, while from minute 17:28 shown is the gallery in the Bundestag meeting hall where members of the Armenian community were seated. I remember very well that the make-up of that gallery was on April 24, 2015; on June 2, there were other faces in the same gallery, and again, the corresponding mark is absent in the clip.

Let’s continue to monitor the June 7 broadcasts. After the reference to the Armenian Genocide resolution, let’s watch beginning from minute 18:15: shown is the Aliyev-Merkel press conference on the same day in Berlin, but it’s not a clip from June 7. Being there that same day, I can prove that on Arachin Lratvakan were the scenes from last year’s press conference, and again the word “archive” is missing. In our opinion, in this case it would be better to write the specific year, month and day.

Tired of TV clips, my computer mouse took me to the June 3 issue of Aravot. “The session was opened by Bundestag president, professor Norbert Lammert because Chancellor Angela Merkel was absent.” A distortion of reality because no one had announced beforehand that the Chancellor would “open” the meeting that day. Nothing extraordinary happened: Norbert Lammert “opened” the session because he is the Bundestag president, regardless of whether the Chancellor was present at the session or not.

You might not agree, but I get the impression that we’ve moved far away from thorough work. We justifiably accuse others of distorting our history, but don’t we ourselves, perhaps not realizing it, do the same?