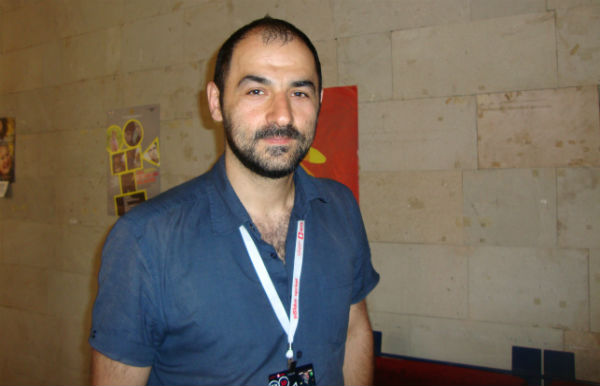 When I was young, my family moved from Vanadzor, Armenia, to Lithuania, and I began working in the local television in Vilnius.

After working for a few years, I bid adieu, shut the door to a job that fed me, and decided to apply to the film academy and study to become a film director. My first film was Lernavan, then I filmed the documentary Father, which was screened at the Golden Apricot Yerevan International Film Festival this year.

Leaving television turned out to be quite easy, since it is an empty and futile reality. Television is a victim of ratings, a collection of lies and advertising, where what’s important is not even being right or wrong but the clownishness of it all — in order for a program to be watched, you have to act like a clown. And the program that I hosted was in that genre — a show full of jokes, where I was used for my exotic appearance and poor Lithuanian spoken with an Armenian accent. I quickly became bored and decided it was enough.

Now I teach at film schools for children and youth. I also work at orphanages, where, using the impact of film, we try to provide psychological assistance to the children. We want children to become self-confident and develop ideas about the world.

Film is a great language with which to speak about the world. Life is so interesting that’s there’s no need to engage in clownery or adopt artificial techniques.

Filming Father, for example, I had explicitly decided not to interfere in the lives of my main subjects, thinking I don’t have the right to manipulate their life or relay my thoughts to them. Of course, I had questions from the beginning: I wanted to understand why the film’s over-70-year-old father of several children continues to have children at his age, what is his struggle, or rather, what is the essence of that struggle?

I wanted life itself to provide the answers to these questions — without the intervention of a filmmaker.

To tell the truth, I’ve invented a term with which I explain the essence of documentary film. I think that documentary film is a hunt for wonders. You go to film, but in the depth of your heart you are always waiting for the moment when you will come across a miracle. And if you can catch it, your film will turn out, but if you’re unable to catch it, then you have to wait until it appears.

Shooting a film is like fishing, where patiently waiting is important. You go to film, throw your line into the water (turn on the camera) and wait for your “catch”.  You know that in life, there’s everything — you simply have to wait. But this process is not a lottery… the filmmaker (like a fisherman) has to have a good feeling about the surrounding environment, material, and people.

In the film Father, for example, there are scenes where the children are playing and fighting with each other. I didn’t stage those; I didn’t intervene — I simply filmed them, and they turned out to be the most interesting [scenes]. I worked on this film for three years, filmed it for one and half years, gathered 80 hours of footage, and developed the story over time.

I feel that stories have to mature and open up before you themselves. I have various ideas for “fishing out” the miracles in Vanadzor, but they’re still raw; they haven’t begun to eat at my heart to the point that I can’t live without filming them.

Generally, I’m confident that if you can do something, then it’s not necessary [to do it]. And sometimes not doing it is hard, especially when you see that there’s a lot of beautiful material around you with which you can film a good film and send to festivals. But will it contain any spirit?

I’ve become convinced that speculation is quite “tasty” in art. You think oh, what a great story, what a great subject; it’s enough to just film it, apply a few cinematographic tricks, and that’s all… a film is born. But, actually, that would be not a film but a speculation. The very same speculation that we see, say, in television.

In any case, one needs to approach the material carefully and honestly. I’m now slowly trying to film my feature film debut. The film’s working title is Testament and it deals with the Armenian Genocide. This film will be metaphoric and is still in the script development stage. Prior to returning to Lithuania, I am going to visit my grandfather in Vanadzor and then I’ll begin work.