‘What are Journalists Worth?’ 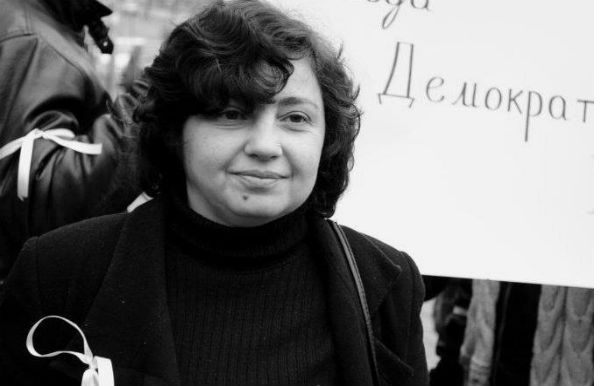 My father says, “Journalists are forced to be the world’s dirtiest people, the orderlies of society, they get ‘material’ from everything — from the dirty underwear of the ‘stars’ to honest village women milking their cows. Don’t do this work — you won’t go hungry as long as I’m around.”

Yeah, sure, but I, past the age of 40, want to support myself, which is why being a writer graduated from the polytechnic, I am in journalism and I don’t know how my next contact with the world of journalism will end.

Still fresh in my memory are those days when beloved Gayane Babayan was complaining about her boss (I can give his name but there’s no need, everyone will know who I’m talking about anyway) — she wrote for a newspaper but never got paid.

She said: “Luso, it’s been a year that my finger’s been stuck on the redial button — I’m so fed up with calling. He keeps throwing me off, that man with no shame; it’s been a year he’s been saying soon. When is that guy’s ‘soon’ when it never arrives?”

Somehow, by getting her friends involved in this affair, she succeeded with her sweat and tears in getting at least a portion of the salary owed to her. Then she went working at other news outlets and said that everything was fine, though then she was complaining, saying “Luso, I’ve become an idolator of material — wherever I look, I’m searching for material [for a story].”

If it wasn’t for Gayane’s unique, unembarrassed manner, no material would become a story because in this country either nothing happens or so many similar things happen that you have to employ I don’t know what sort of tricks to get your news story read. We are neither big and daft like Russia nor civilized and liberal like Europe — nor multicultural and diverse like the US, for a story not to be a problem. Whatever “material” there is everyone’s already written about everyone — everyone dreams of the “exclusive”. Even with me, when I was a “story,” Gayane conducted an interview for all three papers where she was submitting pieces.

She’s no longer, but for me she’s a “story”. That is to say, not her, but the phenomenon which brought her to my recollection. And the phenomenon is called “throwing oneself.” No matter how odd it might seem, journalists today have as many options of “throwing themselves” as sex workers, who are taken who knows where, though they know why they’re being taken there; it’s all the same, they can’t know what will happen, what will be required of them and how much money they’ll give or won’t give.

In both cases, the person is defenseless, since there is no legal employment contract anywhere. In journalism, I’m referring to incidents when employees are taken, say, “on probation” or “let’s see how you write” or “let’s see how the paper moves forward”  — when there is no specific contracted position or honorarium.

Though in these cases too it’s possible to “throw oneself,” because both print and online news media today are launched by someone’s money and are aimed at serving a specific interest, mainly political. These are preparations months, even years ahead of the elections, to gather readers for articles by journalists who are read and keep them later on the basis of visiting the website from inertia or reading the paper out of habit. They can also be about bringing someone into the industry from literary circles and then pursuing goals of establishing magazines and websites based on her notoriety, getting hold of funding from abroad for some non-governmental organization or business plan, health websites and publications — advertising medication or medical establishments, and so on and so on and so on…

And in all of this, the journalist is in the most disadvantageous position because when she is no longer needed, they simply throw her out — without paying. The sponsor is no longer paying; they’re not to blame; in the best case scenario, she is given a negligible amount of what was promised and off with a good luck. The mechanism of deception is very well developed and is known to all. You can ask, then why do journalists make that move, knowing full well what awaits them? How do I know? They trust, they believe, they say “it won’t happen to us”; they think no matter what happens the employer too is a person, especially if he’s from your world. But it can happen then too: the editor, the director can also be “thrown out” by the real owners when they feel that they’ve reached their purpose. In this case, the only safe option then is working based on the principle of “in the morning, money; in the evening; the chair” — that is, they pay and then you write and submit your work.

As for how much a journalist values himself in terms of pricing and how much the employer agrees to this, well this is decided by “tête-à-tête”. If we add to this that in many cases that same staff journalist might be told to write political or commercial articles (well, you’re staff; if you refuse to do it, it’s a disgrace), then the journalist, even when offered employment in the best conditions, remains vulnerable because she doesn’t have a normal trade union. The Union of Journalists of Armenia, both in name and in manner of working, has remained at the Soviet level — there is no one to defend the interests of journalists, that the writing also have a price, because it’s work requiring quite a lot of stress on the brain; journalists’ families live with their “material”; let’s not even talk about events, a journalist begins to perceive people as “material,” friends… if he is an employee of a daily paper and has to “fill pages” — finally, he turns into a vacuum, loses the quality, turns into “paparazzi”; in the worst case gets degraded; in the best case, leaves the dirty world of journalism.

What is a journalist worth? How and who decides this? Who protects journalists?

School: No. 7 secondary school in Kapan
University: State Engineering University of Armenia, Faculty of Cybernetics
Favorite book: I don’t have a favorite book; I have favorite quotes from different books. In my notebook I would write Jane Eyre
Favorite film: I don’t have a favorite film, though I am disposed toward art house cinema. But generally, Spring, Summer, Fall, Winter… and Spring (2003)
Favorite music: I don’t have favorite music; I have daily music, and generally, I would write in my notebook Aram Khachaturian’s “Masquerade”
Favorite sport: cleaning house
Favorite expression: “If you understand that Samsara is Nirvana, your affliction will pass quickly” © Boris Grebenshikov