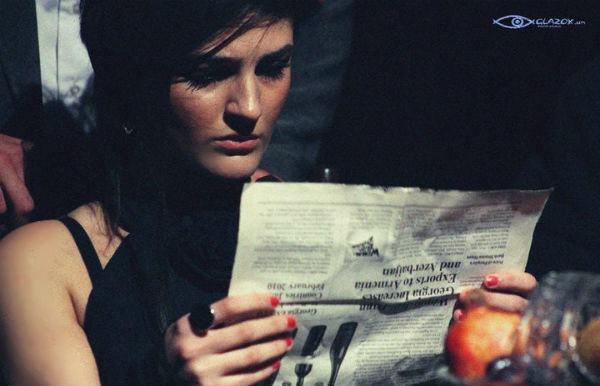 It’s once in a lifetime that one is given such an opportunity, and I have decided, taking advantage of the opportunity, to praise everyone I know and criticize all those whom I’ve had my eye on for a long time. In short, not a peep about impartiality. Off we go.

Nearly all TV programs (in Armenia) are unsuccessful “copy-paste”s of foreign television programs. A TV show is something akin to a song. Many successful songs have their covers. If you do a cover of a song, you have to do it so that it is more original than the original or not at all — otherwise, your cover will be lost in the infinite sea of covers. Our programs are unsuccessful covers, which sooner or later (depending on the power of sponsors) will leave without a trace, leaving us only with memories.

Let’s put aside the duplicate format of TV programs and move on to the announcers. Nowadays, if we tune in to more or less well-known programs at the same time and try to find at least 5 differences among the announcers, we would do well. All are the same and again duplicated. The girls aspire to be like (Kseniya) Sobchak and the boys too. They know neither how to speak nor anything else so that at least we could watch or delight in the show for some other reason. And each of them have a few permanent viewers who are either the aunt’s grandchildren or neighbors or minors who have not yet established themselves or adolescents madly in love with the announcers.

Or the situation of our websites… The mission of them all is only to ensure the necessary number of visitors and it doesn’t matter due to what. Spam breeds ruthlessly everywhere. They choose provocative titles and try to get your attention.

“Sirusho got into a fight with an employee in one of the Star supermarkets.” Did it get your attention? You open the page to read the story (thinking Sirusho refers to the popular Armenian singer who was Armenia’s contestant in the 2008 Eurovision Song Contest) and it reads: “Siranush Vardazaryan, who just returned to her homeland from Russia, entered the first supermarket she came across and got into a fight with an employee. It’s unbelievable, friends, unbelievable…”

“Nazeni got married: See fantastic photos and videos,” “Levon is eating khash with Serzh. It’s enough to go mad. Photos and videos” and more like this…

Basically no information reaches us through websites. Articles awash with spam; below it, a Torricelli void.

I don’t listen to radio now. During my university years I listened to radio and to one program: “Night with Karen Avetisyan” on Radio Van. Then that poor guy was taken off the air and that put an end to my listening to the radio. Let’s move forward. If you want to be full of life, to become motivated and live for your Garden of Eden, your heavenly place, Mother Armenia, then every evening obligingly watch a news program on any TV channel. And when you tire of fairy tales and you decide to no longer live in the clouds, read information reported by any opposition media… What, brother, the time has come for you to solemnly pack your bags and get far away from us? This is Gehenna; it’s not your homeland. An obscure situation…

Left on the negotiating table are Armenian soap operas, which are the most ideal in all of this. Educational topics, ideas full of information, beautiful and scenic places, actors who are intelligent beyond compare and profound dialogue. Everything is nearly flawless, and let no one say otherwise. This is what I believe, and I also wish that at least a few months or, damn, a few years later, the advantages will be so great that I will forget about the minor shortcomings and in self-oblivion praise these soap operas.

That’s all. With you was Armenia’s voice from Masiv. Till next time. Take care.

School: No. 142 school named after A. Gharibyan

Favorite expression: “Give it to whoever you want, just not to seriousness” (rough translation)