“The Easiest Thing To Do Is To Play On People’s Dark Instincts, Because It Is A Profitable Process” 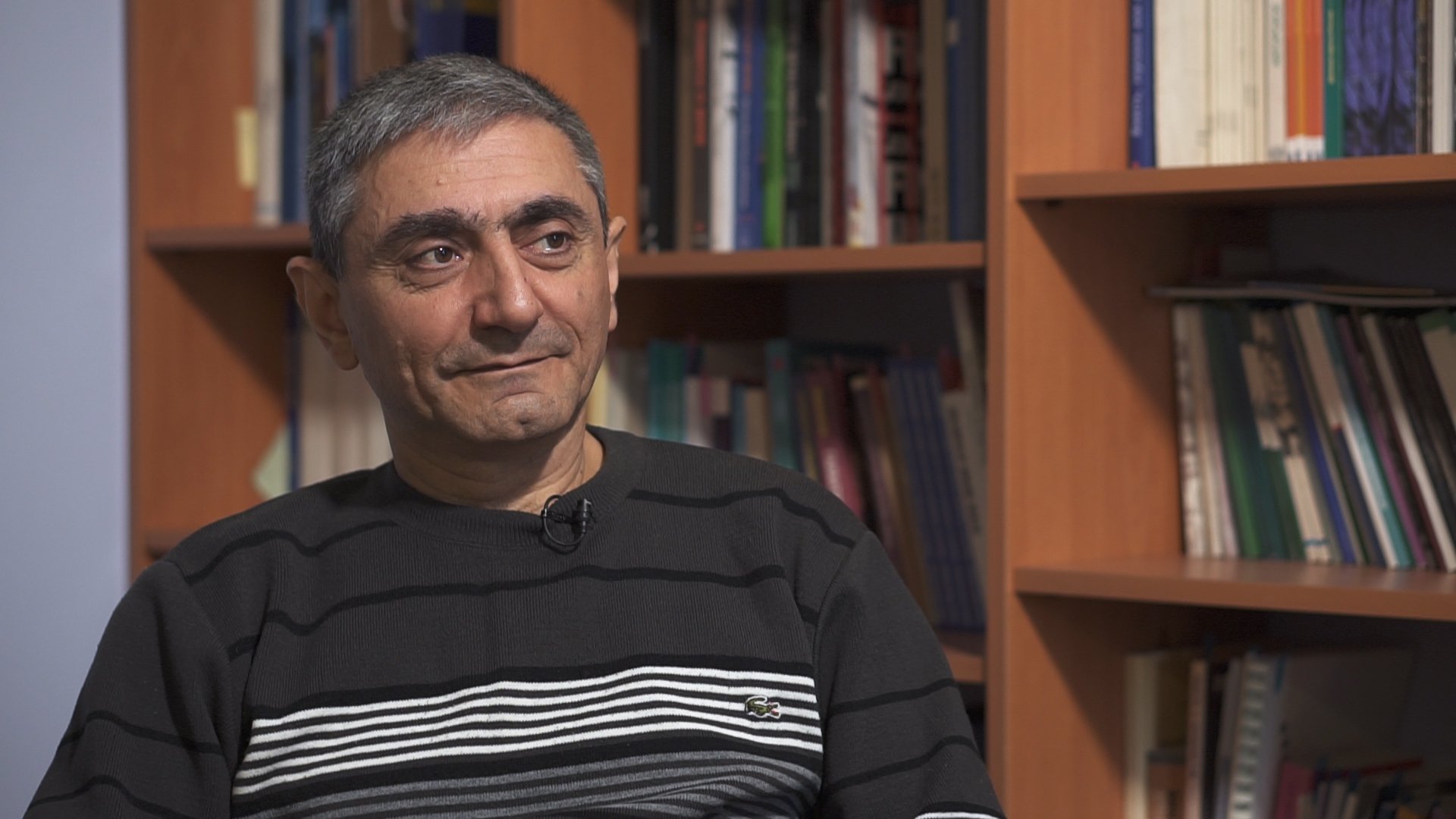 Gnel Nalbandyan, a journalist and editor-in-chief of Armenia TV, said that the information coming through the state channels had been degraded and devalued for 30 years.

And we seem to have done our best to examine today and realize that, in fact, we have done nothing.

The situation in Armenia is tense now. What role did propaganda play during the war?

We must be able to separate information from propaganda because those are antipodes. There may be a propaganda component in the information, but even if there is 1% propaganda, the quality of the information decreases dramatically. It’s like putting a mouse in a jar of honey. In that case, the honey is no longer edible, it must be disposed of.

Propaganda has such a unique feature. It touches something and transforms everything. Information works with intellect, and propaganda works with human emotions and feelings. The first enemy of propaganda is intellect.

Remember that propaganda can be implemented by three main systems: the state, the political party, the church. For these three, propaganda is a way to spread their ideology.

And the ideological content first of all contradicts the information interests of society. It has nothing to do with existence.

Can we say that we remained under the burden of propaganda and the trust in official information was zero?

Information coming through state channels in Armenia has been degraded in the last 30 years, thus depreciating. People do not believe in state media, which can be called official.

In fact, no one in Armenia knows what official news is, as there is no definition. And it is natural that trust in official information is constantly declining.

For example, on March 1, 2008, when a state of emergency was declared, the media was required to cover only official news on the subject. But no one knew what the official was.

At that time I was working for Public TV. The Prosecutor’s Office, the Investigative Committee, the Presidential Palace and various other bodies sent us their videos, saying that this was the official one. We had no right to check it in any way. There could be no question of editorial independence and politics. They would send it and that was the end.

It was unknown at this time what he would do after leaving the post. The same situation continued for a long time, also during this last war. We assume that if the information is on official websites, it is official. And if, say, the Prime Minister writes something on Facebook, is it official?

What if the information is deleted? This has happened several times.

Official information cannot be deleted, it can be corrected, clarified, refuted. Many spokespersons, governors and civil servants can say different things on their social media pages and on different websites, and the level of unreliability of those websites can be very high, but all the same, what they say is considered an official word. And after that, the official representative can say that he was misunderstood or mistranslated.

But if the information is official, it should not be misunderstood.

During the war, Artsrun Hovhannisyan reported official news for 44 days, and the Armenian media, especially the TV companies, sacredly rebroadcast that news, as required by law.

But it turned out that this was not news, nor was it official. Artsrun Hovhannisyan, who was a representative of the Ministry of Defense, later said that he did not know much either, even though during the war he assured that he verified every piece of news through his channels. Defense Ministry spokeswoman Shushan Stepanyan was not an accidental person (say, an independent analyst), she represented a state structure.

And it turned out that the Ministry of Defense lied for 44 days. Compiled campaign texts without having the authority or skill to build such texts. And propaganda is something that should be learned by everyone who is going to do it.

Perhaps trusting propaganda plays a life-saving role when you are overwhelmed and even ready to exaggerate a little in order to get what you want.

You can trust the media, but trusting propaganda is nonsense. After all, this propaganda is not aimed at conveying information, but at imprinting someone’s preconceived ideological assumptions in our brains. Only people with intellectual problems, who do not particularly understand whether they are healing or being poisoned, trust propaganda.

If the source lies several times, gives incomplete information or does not correct itself, then it is an unreliable source. And if you reach for that source again, it means you are playing with fire.

People in Armenia are ready to spread, respond, discuss any nonsense on social networks without understanding the source.

The best barrier against propaganda is the credible and authoritative media, which are so competent and independent that they are the source, the controller and the filter.

I think the media is like a supermarket. You go in and look for what you want. You are usually looking for dozens or even hundreds of things at a time.

Of course, the media field in Armenia is still in its infancy. And I do not know how long it will take. But the big media outlets, whose turnover is obviously high, have not been independent players for 30 years, but attached to the political system. Or to the advertising market and clip production attachments.

They have not been able to dictate their policies, but have succumbed to related business interests.

That is why serious, well-established, reputable TV channels are not able to pursue independent media policies. They remain attached to another market, in this case, the political market.

And that attachment status will remain until those TV stations either lose their licenses, or go bankrupt over time, or are able to increase their financial flows so much that they become equal to political systems, realizing that political dictatorship is detrimental to their economic interests.

In any case, the media layer free from ideological dictates of the state, political party and religious structures in Armenia is very weak. It dissolves into noise, and people are unable to identify who can be called a free, independent press.

After the velvet revolution of 2018, the media field is no longer the same! What really changed?

In countries like Armenia, which are in the process of an emerging democracy, the main problem is the dictates of the authorities. There are no reforms hence within the government. For example, Public Television remained the same as it was at the time dictated by the current government.

Something very interesting happened two and a half years ago. All the TV channels obeyed Baghramyan 26 and were involved in the propaganda system of the authorities, as they had the same task-order coming down from Baghramyan 26.

There is no other propaganda model that dictated the same text to everyone!

The most important task in the propaganda system is to direct from one center with campaign texts. If a second or third center is created, chaos is created in the field of propaganda.

In 2018, there were significant changes in the field of television, as the propaganda model was disrupted, and channels appeared in the hands of the opposition. Which did not exist before.

It is a sign of liberalization. Did it help to increase the quality of TV production, especially the media, on large private channels, which inadvertently became opposition, without even wanting to?

Due to the circumstances, these media outlets did not serve the interests of the government, which was impossible to imagine two and a half years ago.

The channels had the opportunity to criticize the government, this was unheard of.

I can’t say how it affected the quality, but people in the newsrooms felt the breath of freedom. Regardless of whether they provide quality products or not, the journalists got rid of the fear syndrome of 26 Baghramyan Street.

Getting rid of state propaganda was seen as a chance to counter-campaign. And it is hard to consider that freedom.

The quality of information will not improve if the media is partisan, as it is a sign of imprisonment.

But journalists understand that they can also criticize the authorities. And that is a turning point.

Can everyone be criticized or is the government the only target?

The answer to that question must be given after the next change of government. Only then will we see how effective the past years have been. If the political force that is the sponsor of a TV station comes to power, then that TV station should take an exam and ask itself “if I used to criticize the government, will I continue to do the same now or not, if the government is my sponsor?”

The issue is to refuse news that is imposed on by the structures and institutions outside our editorial office. So that they do not say, report this, but not this.

In my opinion, this is a strong point of editorial independence. And if they decide to report low-quality news or information noise, it should be the media policy and its relationship with the audience.

If they can do that, maybe the institute of free media will be established. Otherwise, they will praise the future authorities again and criticize the one of today, which will become the opposition one way or another.

And we will fall into the same trap again.

Now the audience is depressed and sensitive, and it is very easy to be shocked by the choice of news. Do you take into account the mood of the audience?

No, we are working in the same way. It’s just that the work has increased and our principles have not changed. We try not to report unverified news, to remove the emotional layer, regardless of whether it is a revolution or not, whether it is a war or not.

We remove the hysteria, we do not make an Indian film out of human tragedy, we try not to touch the dark instincts of the viewer.

The easiest thing to do is to play on instincts because it is a profitable process. And it can always be presented with patriotic sauce. In that case, it is likely to present itself as a platform for presenting and solving potential social problems.