There are many international media outlets in Artsakh. From the first days of the war, the Al Jazeera English News Channel has been working here, which prepares daily reports from the scene. Journalist Bernard Smith says that before coming to Artsakh he did not know much about the conflict, but he was constantly reading and delving into the history.

Bernard Smith has often been to war zones and hotspots. Coverage of conflicts in Israel, Kashmir and Madagascar. He has been to a number of conflict zones in Sudan and Zimbabwe.

Prior to joining Al Jazeera, he worked for the British media, including Sky News, the BBC, and local television in Manchester.

What is it like to cover conflicts and war?

I definitely don’t seek conflict places, I get sent to them. I would never call myself a war correspondent. It’s just a news correspondent that sometimes covers conflict. Of course, it can be scary. I find it frightening. I was in Afghanistan for 18 months.

It was very dangerous sometimes, and personally, I find it scary.

What about security, and journalism? Every conflict is different in terms of security, like how to be prepared and to be as secure as possible.

They are different, but the threats are similar because violence is violence. So the risks in conflict are being shot. If you’re in a riot, it’s being hit by rocks and stones and tear gas and having things thrown at me. So I’ve been in the way of stones, teargas, shrapnel, and bullets. 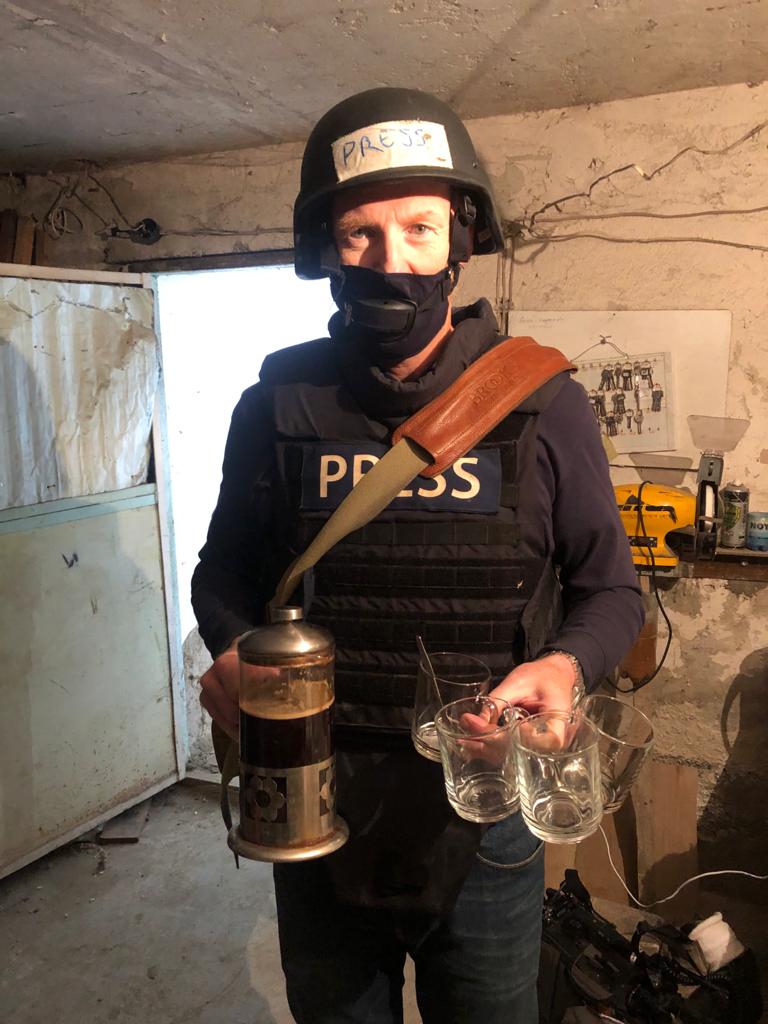 We have training, which is very important. They give us media training, we wear bulletproof vests now which are a help, and helmets which are really important for protecting your head.

We often wear stop vests now, during riots, which are less heavy than the bulletproof vests. And sometimes we’ll have a security guy who helps keep an eye out for us. The most important thing I find in all of this knowledge is first aid.

The Karabakh conflict, in terms of security, is different, isn’t it?

For us, from where we have been reporting in Karabakh in Stepanakert, the threat has come from the air.

All you have to remember when that’s coming in is to seek shelter immediately, whatever is as near as possible. We haven’t been shot at here and we’re not at the risk of that, so the security threat was from the air. It’s all dangerous in different ways, but that’s the threat that we’ve been facing. And so we have to know where to take shelter immediately, and that’s it.

What is important when it comes to covering conflicts? The human stories, casualties, statistics or figures, what is the most important part for you? As a journalist working on the ground, what are you looking for on the ground personally?

It’s really dangerous and horrible and people get killed.

We try to get human stories of people that help us to then explain what the war is about. 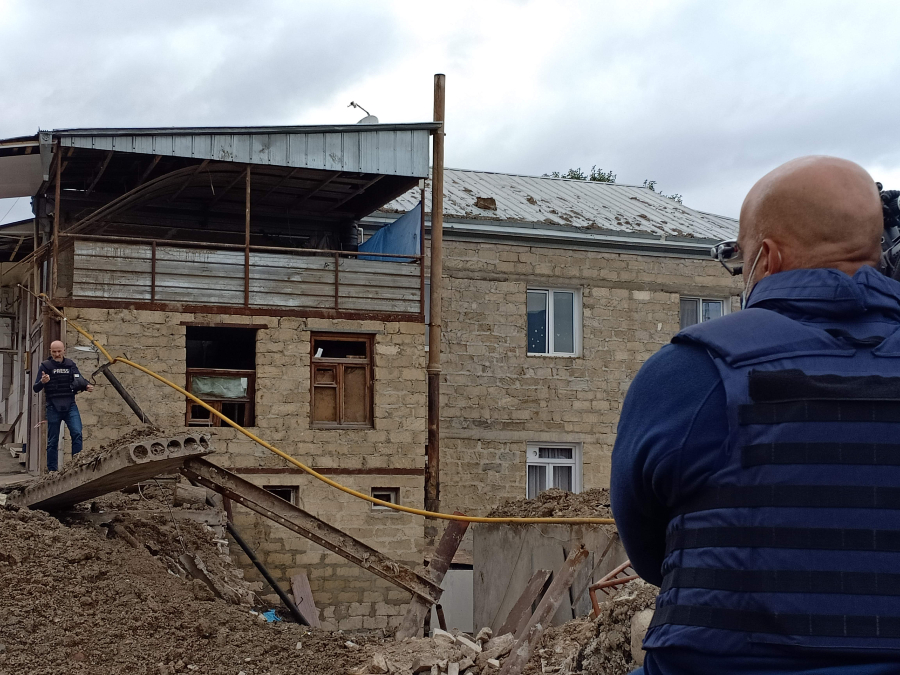 Bernard Smith while working in Stepanakert

So if I’m looking for somebody, Nagorno Karabakh who’s home has been bit by a bomb, they will tell us what happened and their story will help us to tell the story of what is happening. If he was there when his home was hit by a bomb or he was here during the last war 26 years ago, we use what he says to help us tell the story.

Some journalists working in the war zone, especially local journalists, say they will do everything for their story. Story vs. security. Which is more important? Should a journalist put their life in danger for a really good story or to capture some action?

No, life’s too short. So the most important thing, in my perspective and the team that I am working with, is our lives and our security.

Of course, you have to take risks for stories, but they are always calculated risks. For example, wearing a flak jacket and a helmet, there have been journalists injured covering this conflict who were not doing that. International journalists, who weren’t doing that, and the injuries that they have sustained may well have been less serious had they been wearing basic bulletproof equipment.

Of course, we are not as involved in the story as local journalists. We are not a part of the story. So they may feel more desire and passion to get the story out. In our case, we discuss with our team, we assess with our own experience of things and what we’ve done in the past, and if anyone is not happy to go, we won’t go.

We don’t put any pressure on anyone, we haven’t rushed into something. We make our own assessments and decide after a consultation with our head office whether we should go someplace or not at a certain time.

There are two sides to the conflict, and you are reporting from one side. How can you keep the balance? As a journalist working on the side of the conflict that is under pressure from the other side, and vice versa, how do you deal with this?

In this particular story, I have a colleague in Baku. And the way Al Jazeera has done it, and I think it’s probably the best way, is to make sure that elements from both sides are incorporated into our daily reports, and we’ve been doing that. 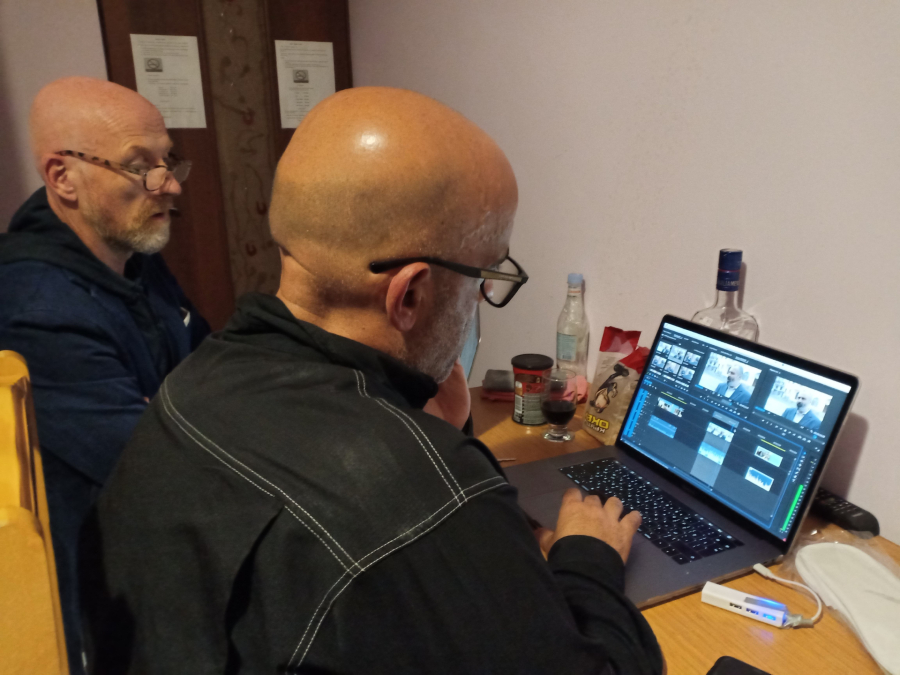 Bernard Smith with his cameraman Jamil Bassil editing footage in a hotel room.

Our reputation depends on being balanced, I think, and we know we are reasonably successful in being balanced because we are getting criticism from both sides, which means that if no one is happy, then maybe we’re getting something right.

Fact-checking figures and opinions are important. How do you manage to do fact-checking when you are working daily on the job in order to do precise reporting?

So for things like fact-checking we rely on people like you, local journalists who we hire to work with us on the ground and we try to get the best experience that we can. Of course, we use news agencies like Reuters and AP, and AFP which are all reliable. And they’ll put something out online and we’ll try to check it and we’ll ask you to check local sources.

Of course, I don’t speak Armenian, we don’t speak Turkish or Azerbaijani, so somebody there will check. Once we are confident that the sources are reliable, then we’ll go with the information.

But we rely on the facts that we know, for example, those who know the story and are respected journalists and whose information we can trust.  We don’t put anything out without making sure that we have some local sources to confirm or to qualify the information.

You cover events from different parts of the planet and with time you become more invested in the stories. After a few days, the story becomes personal. How does a journalist deal with absorbing new stories with each job they take?

Well, of course, I’m a journalist, so it’s always fascinating to discover new stories. I will admit before  I came to Nagorno Karabakh, I didn’t know a lot about the story. I remember it from the late 80s when I was at university. I remember this conflict from a distance, but of course, I didn’t know much about it. I have a piece of general knowledge and I read and I read more and I read deeper. And of course, because I have been here every day living this story, as the days go by, my knowledge increases. So it’s fascinating because I am a journalist and that’s why I’m in this job, to discover new things and to report things that people don’t ordinarily hear about. 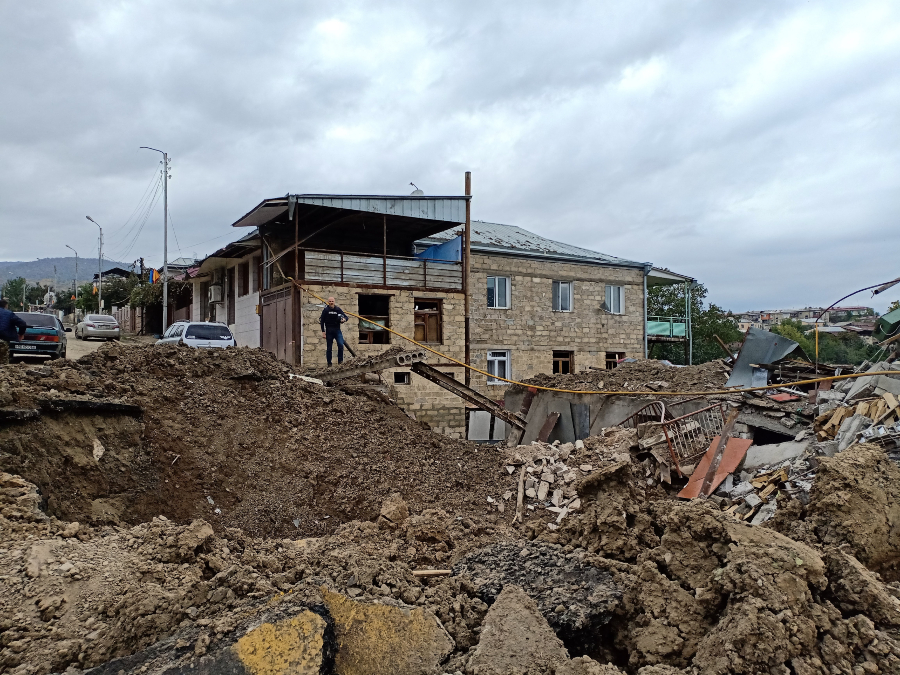 I have to say, the beauty of working for Al Jazeera is that we get the chance to go to places and to spend more time in places to discover stories than other broadcasters or other news organizations might do.

It’s a privilege, I enjoy it as a profession. But yes, you do get involved in the story a bit, because you understand the circumstances more. This story, in particular, I now know, is more intractable than that. It’s like India and Pakistan, it’s like Israel and Palestine. It’s a very difficult issue to resolve, wouldn’t you agree?

One of the biggest challenges for us is because we’re working for television. We have these two and a half minute reports, news packages, and it’s so hard to get everything in. In fact, in television news, they tell you that two and a half minutes is a long report. Many of my editors would prefer one and a half, to two minutes.

And the biggest challenge is when I’m writing a script, I write all this stuff down and have to filter everything out and try to minimize my words so that it comes into this two and a half minute to 45-minute maximum written report. I have to get all the angles in and include as much information as possible. All in that tiny space of time. That is the hardest part of this job.